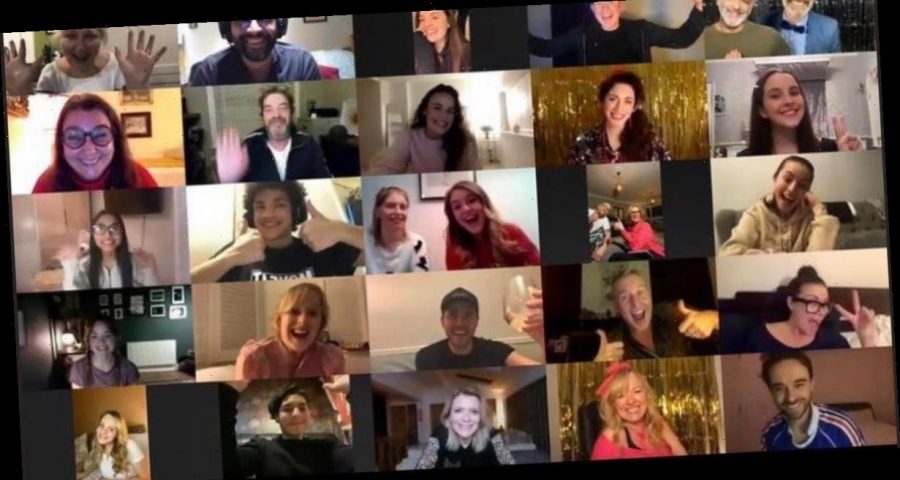 Coronation Street actors have reunited over Zoom after filming of the soap was halted.

The ITV soap was forced to pause filming for two weeks for producers to rewrite scenes amid the pandemic.

But, this hasn’t stopped the cast keeping in touch as actor Daniel Brocklebank, who plays Billy Mayhew on the soap, shared a glimpse of a Zoom call amongst the stars.

The 41 year old’s screenshot shows the Corrie cast including Jane Danson,whoo was recently spotted with Robert Beck on a dog walk,Jack P Shepherd, Sally Dynevor and many more. In the image, the cast are clearly keeping their spirits high as they smile and wave at their cameras from their homes.

Actor Daniel, who shared the image on his Twitter, wrote above: “Saturday night in… @itvcorrie family. Can’t wait until it’s a Saturday night out with this lot!”

Former Corrie star Catherine Tyldesley,who recently slammed trolled for accusing her of Photoshopping a photo of herself, replied to the tweet with a series of heart eye emojis.

While fans shared how much the image had cheered them up as one wrote: “This is just everything right now xx”.

As another said: “This makes me so happy. It's like a dream zoom meeting. I think I would end up calling the cast by there Corrie names and ask them questions relating to who they play in the show. Like "Billy how did you get the piano into your flat?””.

And a third added: “Ahhhh it’s so lovely seeing all those faces you must really miss not being able to see everyone at once x”.

It comes after Corrie was forced to halt filming to rewrite scenes amid after an outbreak of the virus on the set of Emmerdale, causing them to shut down for two days.

ITV bosses decided to take some time rewriting scenes as a result of the ongoing pandemic, but will be back up and running soon.

A Corrie spokesperson told OK! online at the time: “Coronation Street will pause filming from next Monday, 25 January for two weeks to undertake some rewriting of stories and scripts as a consequence of the coronavirus pandemic.

“We will also be taking the opportunity to review all health and safety requirements to ensure we continue to provide a safe working environment for the cast, crew and production team.

“This pause in filming won't affect our ability to deliver six episodes of Coronation Street each week.”

Emmerdale bosses were also forced to briefly pause filming, but were back up and running by Monday 25 January, as a spokesperson said: “We paused filming on Emmerdale last week due to some members of the team testing positive for Covid-19.

“We've carried out proper track and trace measures on those cases and undertook intensive cleaning of the production building, whilst reinforcing the health and safety protocols we have in place.”

They added: “We're returning to filming from this Monday, 25 January. This pause in filming will have no impact on our ability to continue to broadcast six episodes of Emmerdale each week.”