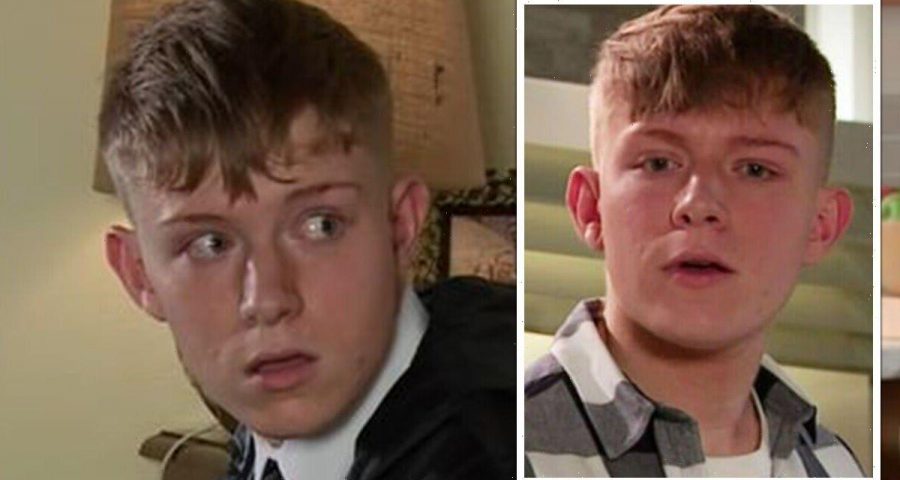 Coronation Street: Imran and Toyah get into car crash

Max (played by Paddy Beaver) has seemed to have left his rebellious days behind him and focused on his relationship with classmate Sonya (Isabelle Smith). The pair began messaging online, with Sonya finally agreeing to go on a date with him. Many fans were sceptical of their relationship as some thought he was being pranked by some of the boys in his school. However, in upcoming scenes, Max will be the victim of online abuse after a stranger gets hold of his naked selfies, pushing him to struggle with feelings of shame and toxic masculinity. How will Max cope with the overwhelming feelings?

As Sonya and Max’s messages began flowing back and forth online, fans became increasingly worried that he was being pranked after hanging out with a group of friends.

The boys were seen winding him up about his crush on Sonya and questioned whether she was in on the cruel prank.

After agreeing to go on a date with him, Max asked his parents, David Platt (Jack P Shepherd) and Shona Platt (Julia Goulding), if he could practice his cooking skills.

However, in upcoming scenes, viewers will finally see Max’s vulnerable side as he’s left struggling with shame and body confidence when a stranger gets hold of his selfies in a shocking twist.

Speaking at the Britsh Soap Awards on the red carpet on Saturday evening, he revealed that the ordeal would be a “turning point” for his character.

“I think it was very important to me to be very focused and to get it very right because this genuinely affects so many people.

“I even know tens of people this has happened to at a very young age, and it really does happen.

“What could make someone more vulnerable than a photo of that? I don’t know. I think it’s a turning point, I really do,” he told The Mirror.

Paddy continued: “With Max’s, you’re going to see it from more of a male perspective, and you’re going to see a lot of toxic masculinity, a lot of bravado and a lot of fear that I think Max feels quite ashamed of because this kind of thing itself – he’s 15 – but because he’s a boy, his mates are boys, it’s a very different situation.

“I researched the new laws that have come about more recently and sort of where Max’s head would be at. Because he’s a 15-year-old with a laptop.

“I think when I spoke to lots of people that have been affected by this, it’s genuinely horrifying to see this epidemic. It really is an epidemic.”

Max has been known to lash out at anyone in his path when feeling vulnerable and uncomfortable in situations he can’t control.

If he finds out who managed to get hold of his pictures, will he be able to control his temper, or will he do what it takes to shut them down?

Could Sonya and his friends be behind the cruel prank, leaving Max feeling uncomfortable and unsure of what to do with his feelings?

If his temper boils over, could Max end up taking deadly action against those who he thinks have wronged him?

Sadly, Paddy revealed he experienced the same thing happening to young people when he was at school, touching on the topic of consent.

He explained that it would happen all the time at his school, and when researching the storyline, he was blown away by the number of people who had suffered from the same incident.

Touching on whether he thinks Max will be able to confide in David, Paddy explained: “I think he’s torn on that one.

“I think David is David, and he’s the only person Max can fully trust. Max is so vulnerable – he’s gone from house to house to parent to parent, and David has been the only constant there.

“There is a huge reason why Max would want to confide in David, but again, there’s a huge amount of shame involved in these situations, so I think it would be a really tricky one for Max and a lot of shame and confusion.”