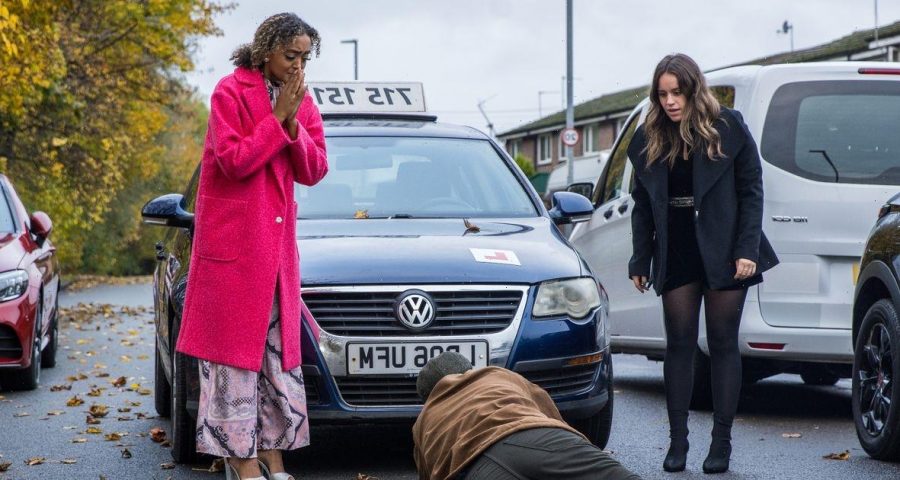 Coronation Street's Faye Windass (Ellie Leach) finds herself in trouble yet again weeks after being released from prison.

As a learner driver, Faye drives a still tipsy Emma (Alexandra Mardell) back from their New Year's party, where they then collide with Ted, a frail elderly man carrying his shopping.

After the collision, the girls rush over in fear and are relieved when he opens his eyes and states he is fine.

With Ted then inviting Faye and a drunk Emma into his flat for a brew.

However, after returning back to the cobbles, a very shaken Emma is worried as Imran (Charlie De Melo) spots Emma feeling worse for wear, he then say says she shouldn't be in charge of a learner whilst under the influence.

Imran raises that Faye would be in trouble if they had an accident – weeks after Emma had been released from prison.

Feeling guilty, Emma and Faye decide to return to the flat to check up on Ted to further apologise for the incident.

The girls vow to keep the accident a secret, ensuring that no one knows about their intoxicated state.

With Craig (Colson Smith) keen to make plans for moving in with Faye, he reveals that he's arranged for them to move into the salon flat with Tyrone (Alan Halsall) and Emma – Faye does her best to hide her fear about the situation.

Emma heads home to find Craig and Faye on the doorstep with their bags – She's not happy to discover they're moving in.

The incident leaves Faye's future on the cobbles in jeopardy.

Earlier in the year, Faye had been serving a 3-year sentence behind bars for the accidental assault of Adam Barlow.

Faye attacked Adam from behind with a trophy from the Bistro after Ray attempted to rape her in the backroom and eventually confessed to her crime when it looked like her foster brother Gary was in the firing line – and serving time for the assault.

The shocking car accident comes as Faye attempts to settle into everyday life after being released from prison in time for Christmas.