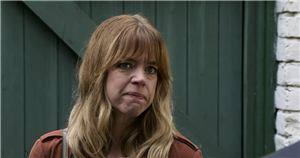 Want all the hottest soap gossip? Share your email to get news, interviews, spoilers and more from the Daily Star

Coronation Street fans were left distracted on Friday evening by a glaring blunder during one incredibly tense row between Imran Habeeb and Toyah Battersby.

The couple look at risk of splitting as Imran admitted he spent the night on ex-wife Sabeen's sofa after Kelly's guilty verdict – with his partner Toyah furious at him for lying to her and sneaking around behind her back.

But as Imran arranged to meet Sabeen in the pub beer garden to smooth things over, Toyah turned up instead – and she was understandably angry.

Toyah seemed oblivious, however, to Sabeen's loud footsteps as she crept through the alleyway nearby – despite her clopping around in huge high heels.

And fans were quick to point out the blunder on social media, as one posted to Twitter: "Wow, Toyah must be deaf… you could hear those Cruella heels from here! #Corrie."

Another echoed: "If Toyah didn't hear those high heels clacking down the ginnel then she should get her hearing tested!"

"Sabeen sliding out of sight!" someone else giggled, while another Twitter user said: "Sabeen lurking in the background!"

Later in the episode, Toyah went to confront Sabeen one-on-one to express her doubts about Imran.

"I've done nothing wrong," Imran insisted, as Sabeen said: "I backed up your version of events."

Sabeen also mentioned a "mystery woman" who Imran spent the rest of the night with – but no-one is quite sure who she could be.

It comes after some fans even suggested Imran might have slept with Alina – and that it isn't Tyrone's baby Alina was carrying when she fled the street.

One fan tweeted: "Is Imran the father of Alina's baby?!"

And another said: "Who started that theory that Imran got Alina pregnant? Bravo to you!", as a fifth penned: "So who has Imran slept with? I bet it was Alina!"

Toyah later insisted that she and Imran be honest with each other from here on out, and even apologised for doubting her partner – and admitting she was jealous.