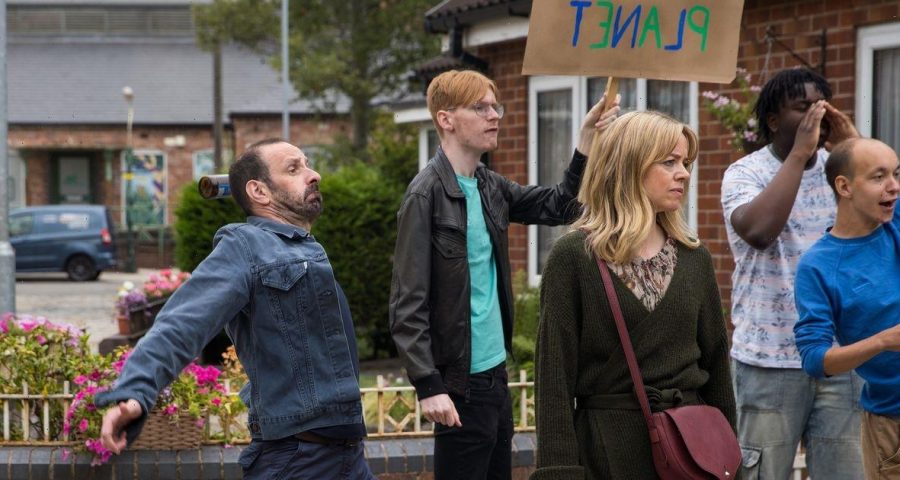 Coronation Street newcomer Griff could be hiding a huge secret after lobbing a glass bottle at Craig Tinker.

On Wednesday (September 7), Griff was busy touting his conspiracy theories on the cobbles, discussing 'Big Pharma' and a 'secret cabal' who is in control of the world from the shadows.

Peter Barlow seemed taken in by his lies, as wife Carla begged him to keep away from Griff after the protest affected her factory.

Toyah, meanwhile, seemed to be getting cosier with Griff, much to Spider's disappointment.

And now fans think he could have been brought onto the street for another purpose, as they believe he is Elsie's biological dad – after the tot was taken away from Toyah and Imran.

Theories have been flying online that Spider could be Elsie's real dad, but with her history of childhood abuse it makes sense that it would be someone dodgier.

Taking to Twitter with their theories, one viewer posted: "#Corrie Griff is so dodgy to me. Feels like HE could be Elsie’s dad not Spider. After all she was abused at home…"

They added: "If Toyah catches on to him maybe that’s how she gets Elsie back."

Another quickly followed up: "Everyone was saying Spider was Elsie’s dad but it’s gonna be Griff innit!"

Others were quick to brand Griff "dodgy", with one viewer even suggesting he could be working undercover for the police.

One fan said: "Why is Toyah getting involved with Griff? He's dodgy and it's not a good idea just before the trial as well."

As another said: "I reckon it's him that's the copper not Spider. He looks CID." In Wednesday's episode, Griff denied he'd ever hauled the bottle at Craig, and managed to get plenty of Weatherfield residents on-side.

But with Carla and Leanne becoming suspicious, he could be in more trouble than he first thought.

The newcomer is played by Game of Thrones star Michael Condron, who rose to fame in the HBO fantasy series as Bowen Marsh from series five, the First Steward of the Night’s Watch.

He has also appeared in period drama The Tudors.