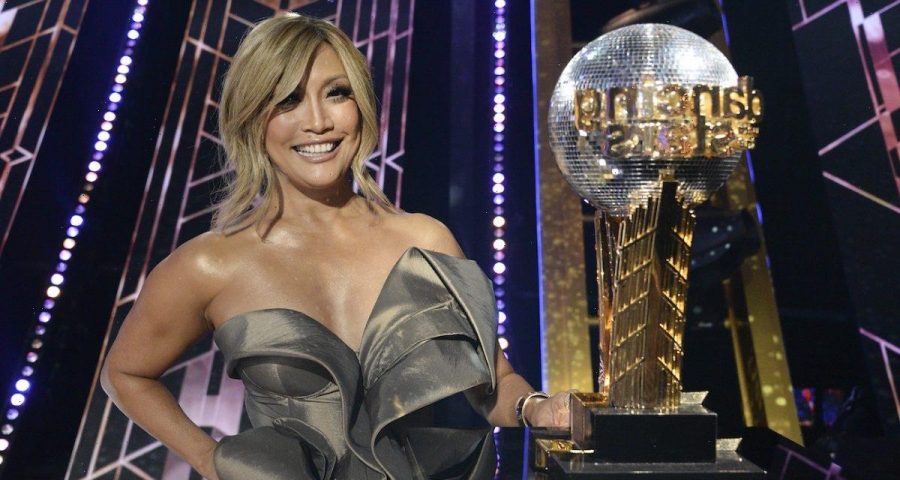 Dancing with the Stars judge Carrie Ann Inaba was in tears last night during a difficult elimination. The judges sent two DWTS competitors home during the Janet Jackson theme night this season. But one season 30 celebrity had Inaba crying in the process.

[SPOILER ALERT: Spoilers ahead for the double-elimination that occurred during Dancing with the Stars‘ Janet Jackson Night.]

While many fans were shocked to see Jade and Chmerkovskiy go, others were focused on Banks, who stepped in front of Jade after announcing her elimination. “The way #TyraBanks said ‘get off my dayum stage,’” a DWTS fan tweeted with a clip of Banks walking in front of the YouTube star.

Banks was likely instructed to stand in that exact spot during camera blocking. Still, that didn’t stop fans from feeling negatively about Banks.

Once Jade was eliminated, Jimmie Allen and Melora Hardin were in the bottom two. Thanks to the new elimination style, the Dancing with the Stars judges vote on who to save.

Bruno Tonioli, Derek Hough, and Inaba were unanimous in saving Hardin and Artem Chigvintsev over Allen and Emma Slater. Visibly upset, Inaba tearfully said goodbye to Allen in the final moments of the episode.

“I was FEELING Carrie Ann tho with Jimmie and Emma, ugh I loved them so much and [I] wish they were also in the semi-final, but I’m so glad Melora was saved,” another Dancing with the Stars fan said on Twitter.

“Love them so much,” another Twitter user said. “I was definitely Carrie Ann in that moment. I’m gonna miss them so much.”

While some fans sided with the judges’ decision to save Hardin over Allen, others can’t believe who is left in the season 30 competition. Hardin, Cody Rigsby, JoJo Siwa, Amanda Kloots, Iman Shumpert, and Suni Lee are all contenders for the Mirrorball Trophy.

“Something really needs to be done to address this popularity contest, I mean, dancing competition,” a fan tweeted after Janet Jackson Night. “The bottom 3 stars this week outscored both Iman & Cody by 2.8 points. Going into the Semi-Finals, we have the bottom 2 moving on while the 4th and 6th best scorers are sent home.”

The Dancing with the Stars semi-finals is around the corner! Tune in on Monday, Nov. 15, 2021, at 8 PM EST on ABC to see who takes one step closer to the season 30 win.