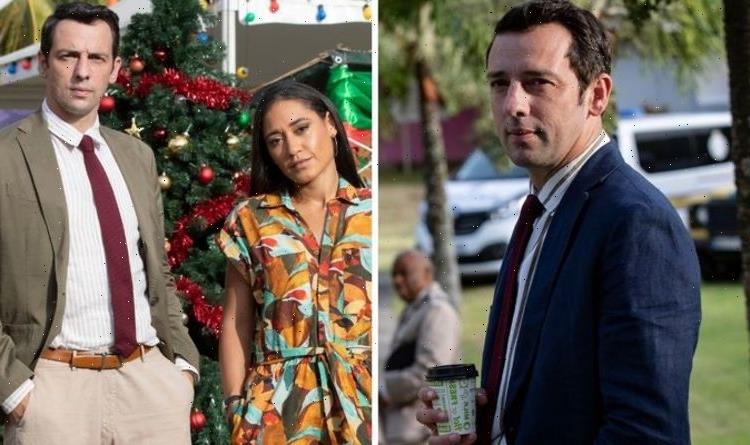 Death in Paradise has a habit of changing its lead detectives. Over the years, the BBC drama has seen the likes of Ben Miller, Kris Marshall and Ardal O’Hanlon taking on the lead role. Its latest addition is Ralf Little, who plays hypochondriac Neville Parker, who seems to be allergic to everything on the island of Saint Marie.

Ralf has just finished filming series 11 of the hit drama, but in a new interview, the actor addressed whether he has any plans of leaving his role.

When asked about whether his character will leave Saint Marie, Ralf simply replied: “Nothing has been discussed.

“I don’t mind that nothing has been discussed. I only arrived in the UK two days ago.

“Nothing has been discussed and people are moving towards Christmas. I don’t think anyone is going to start having those conversations until in the New Year.”

He continued in a Radio Times Facebook Live Q&A: “It has been a wonderful ride already and we will see what happens.”

When asked about how he would like his character to leave the show, the Two Pints of Lager star joked: “I would love to do this massive James Bond-style action scene where I go out.

“And then I have to make a choice, I can save myself or save all my friends.

“And I’d have to save all my friends and I’d go out like an absolute hero.”

“I’ve never given that any thought,” Ralf admitted.

“It started out as an ironic joke answer but if anyone from the production company is watching, that’s how I want to go out.”

Season 10 of Death in Paradise ended on a cliffhanger and fans were left wondering whether Neville confessed his true feelings to Florence Cassell (played by Josephine Jobert).

Viewers watched Catherine Bordey (Élizabeth Bourgine) urging Neville to finally admit his feelings for Florence, and he finally plucked up the courage to go to her house.

However, Florence was getting ready for a date with an old school friend when Neville knocked on the door.

The final scene teased he was finally about to tell her his feelings as he said: “What I wanted to say was…”

Ralf has also teased fans about the upcoming storyline during a cast Q&A attended by Express.co.uk back in December 2020.

“He is absolutely enchanted by this very beautiful, very charming, charismatic, warm and generous character,” the actor teased as he discussed his romance with Florence.

He continued: “And, you know, he finds himself very much drawn to her. Where that will go in the series and in future series is anybody’s guess but yes, he’s certainly very taken with her.

“Those two have a real connection in this series and hopefully we’ll get to see where that goes.

“He hasn’t managed to actually do anything about it yet, but we’ll see.”

The gang will also be joined by a number of guest stars including the likes of Ridley Road’s Tamzin Outhwaite, Waterloo Road’s Jason Done, Safe’s Ben Onwuke and Jamestown’s Ben Starr.