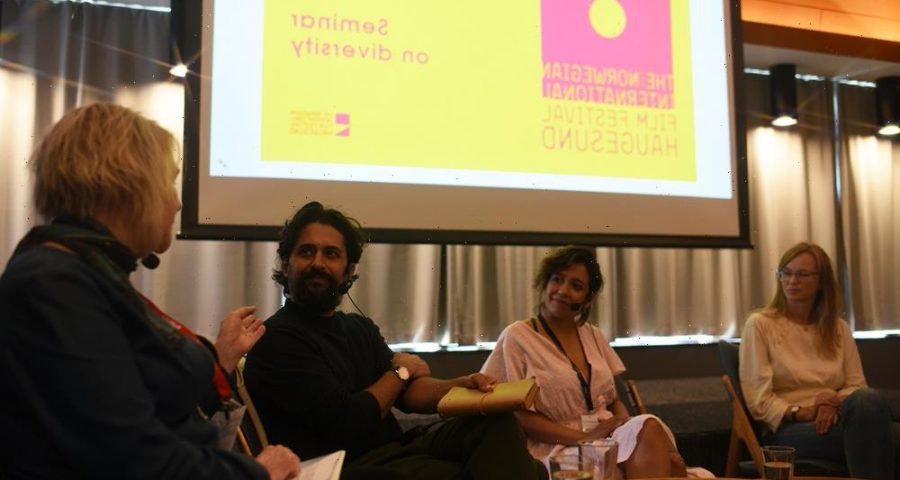 Discussions around increasing diversity and representation across the film industry have been multiplying in the past few years after global movements like #MeToo and Black Lives Matter spurred systemic change. Confronting these issues head-on was one of the main topics of discussion in Haugesund at this year’s Norwegian Intl. Film Festival, notably through the panel event, Status Quo – Diversity Seminar.

Organized in collaboration with Nordisk Film & TV Fond (NFTF) as part of the Audiovisual Collaboration 2021 project, the panel invited filmmakers and key decision makers from across the region to tackle how and why the Nordic film industry needs to diversify.

NFTF’s Liselott Forsman moderated the event, and guests included Iranian-Finnish writer-director Hamy Ramezan, whose film “Any Day Now” – about a refugee family seeking asylum in Finland – was just nominated for the Nordic Council Film Prize, Guatemalan-Norwegian film producer Elisa Fernanda Pirir from Mer Films in Norway; Silje Riise Næss, film commissioner at the Danish Film Institute; Helen Ahlsson, producer and film commissioner at the Swedish Film Institute; and Anne Lajla Utsi, a film representative of the Sami people, the indigenous community that lives in the Arctic zone of the Nordic region and managing director of the International Sámi Film Institute.

The talk was held two days after the Minister of Culture and Equality of Norway, Abid Raja, announced NOK 8,5 million ($974 K) in new funds for the Norwegian film industry. Building upon Norway’s success in Cannes – notably with Renate Reinsve’s Best Actress award for her role in Joachim Trier’s “The Worst Person in the World” – 4,5 million ($511 K) will go to The Norwegian Film Institute (NFI) for diversity measures, 2,5 million ($284 K) will be granted to promote Norwegian films abroad, and 1,5 million ($170 K) will go from 2022 to an international fund for diversity.

“The fund is a collaboration between international institutes, and will contribute to the financing of film projects where under-represented groups have central positions,” the Minister of Culture told Norwegian media.

Discussions included data which emphasizes how little people from ethnic minority backgrounds are represented in the industry, and mentioned collaborations happening between countries to improve the number of stories told from indigenous and immigrant communities.

Sami guest Anne Lajla Utsi notably spoke about her partnership with Disney on “Frozen 2” after the filmmakers got in contact with her when they came to Norway.

She recounted how Disney had initially designed costumes for the Sami-inspired characters that were “a mishmash of different indigenous clothing from all across the Arctic, some Inuit, some from Russia and some Sami.” She told them this wasn’t okay or representative, and they changed the costumes so they would be inspired solely by traditional dress of the Sami people.

“We really felt that they wanted to do it right, they didn’t want to make any big mistake,” Utsi said.

Another discussion saw Ramezan and Pirir, the two guests of immigrant-background, share with film commissioners what they thought was the way forward to promote more diverse storytellers. The Iranian-Finnish filmmaker said that he was often told by producers when applying for grants that he should use the refugee card, while others have told him that he just got funds because he’s from a minority, which made him believe that he wasn’t talented.

“I just want to be a filmmaker among the others, and just for the story to be effective, not for political reasons or for [the sake of] representation,” he said.

As the moderator took questions, a producer from Norway of Moroccan origin, Khalid Maimouni, said that he was frustrated that the panel didn’t include more people from the private sector such as sales agents or distributors, as filmmakers could not depend solely on public funds to finance films.

Though Nordic film industry decision-makers recognized that diverse storytellers were needed to make films that better represent their multicultural societies, it felt evident that this is a discussion that needs to continue for years to come –in both the public and private sector – for real structural change to take place.