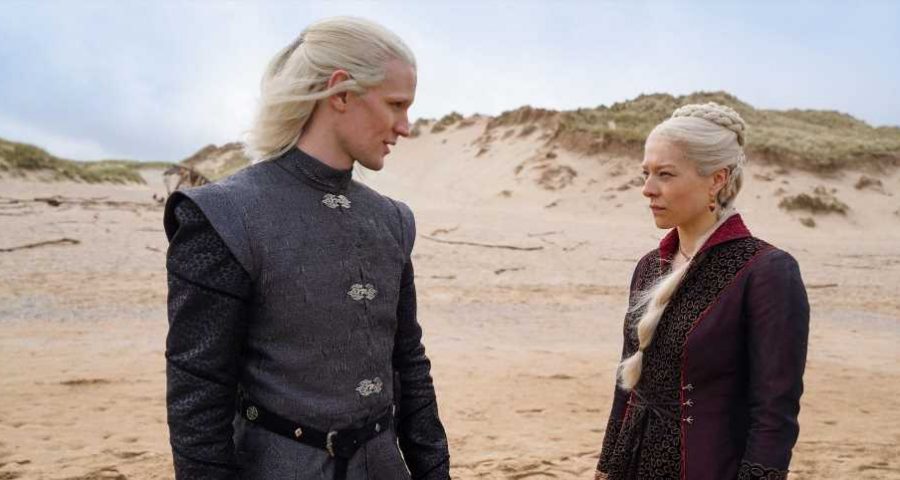 Spoilers for ‘House of the Dragon’ are ahead. Like, *major* game-changing spoilers. Don’t keep reading if you don’t want to know!

Despite still being bitter about the end of Game of Thrones, we are in a fully committed and somewhat toxic relationship with House of the Dragon. So much so that we went straight to the source material to spoil a major relationship in the show (whoops, lol). Namely: we know what happens between Rhaenyra Targaryen and Daemon Targaryen. And it’s a doozy of a plotline. Before we go further, it should obviously be mentioned that massive spoilers for House of the Dragon are ahead. You’ve been warned!

^ Me reading these spoilers

Rhaenyra and Daemon Fully End Up Together

If you watched that scene where Daemon gives Rhaenyra a necklace and thought to yourself: Wait, am I sensing vibes between these two despite the fact that they’re literally related? The answer is, unfortunately (due to incest), yes. 🙃 🙃 🙃 🙃 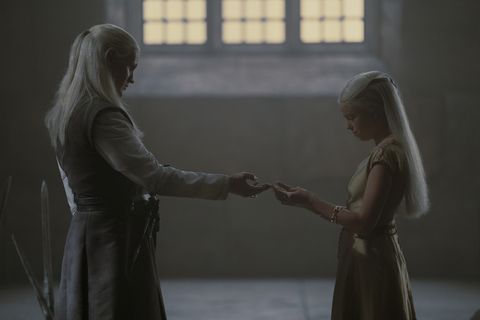 Turns out Rhaenyra and Daemon are end game, meaning they have a sexually tense relationship, eventually hook up, and get married—which is pretty significant from a power play perspective considering (1) they both want the throne and (2) their Targaryen union is almost sure to guarantee that happens—even though Alicent Hightower’s children will inevitably stake their claim.

Keep reading for a detailed breakdown of exactly what goes down between these, uh, love birds. And actually, on that note…

A Brief History on Targaryen Incest 🙁

Among the many things we’re asked to suspend our disbelief over in George R.R. Martin’s world is the fact that incest isn’t frowned upon. Yeah, Cersei Lannister and Jaime Lannister’s relationship got a ton of side eyes on GOT, but Jon Snow and Daenerys Targaryen were straight-up aunt and nephew, and no one seemed to bat an eye. And during the years House of the Dragon is set in? Targaryens were inter-marrying each other like it was their job. 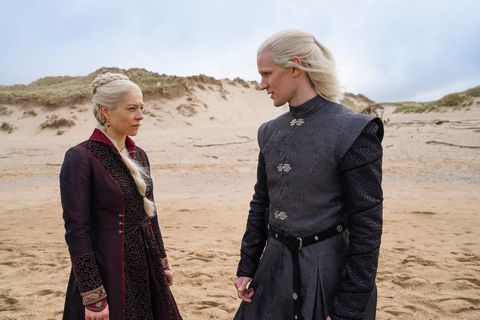 In other words: in this world incest is not “unusual,” and apparently we’re all supposed to just…get on board. In fact, the show makes made that abundantly clear in episode three, when Otto (the Hand of the King) suggests that Rhaenyra marry her half brother Prince Aegon. Sure, King Viserys was shocked at the idea, but only because of their age difference—not because they were related.

Daemon is obviously already married when House of the Dragon begins, but that doesn’t mean he’s faithful. According to Fire & Blood (the source material for House of the Dragon), Daemon returns to court post-Crabfeeder drama and declares himself “King of the Narrow Sea,” which King Viserys is somehow fine with. At this point, he starts spending “long hours” in Rhaenyra’s company.

Per Fire & Blood (which is basically a long fact-filled history of the Targaryens), there are two rumors surrounding their relationship: one that Daemon seduces Rhaenyra and “claims her maidenhood,” but the King doesn’t let them marry because Daemon already has a wife. The other, even more scandalous rumor? That Rhaenyra actually has a thing for Ser Criston Cole, so Daemon teaches her how to make him “see her as a woman.” Which involves “kissing lessons” not to mention lessons in “pleasuring a man with her mouth.”

Anyway, point is: these two have history. But they have to go through a few relationships first before marrying each other. After Daemon’s first wife dies, he gets together with Laena Velaryon—who was initially suggested as a bride for King Viserys. They have two daughters. Meanwhile, Rhaenyra marries Laena’s brother, Laenor Velaryon, and they have several kids.

Laena and Laenor end up dying in the same year, giving Daemon and Rhaenyra the opportunity to waste no time and get married themselves. In secret, of course, so King Viserys can’t stop them. They go ahead and start having kids of their own, including Prince Aegon the Younger and Prince Viserys.

Annnnd, there you have it! Bye *laughs uncomfortably*