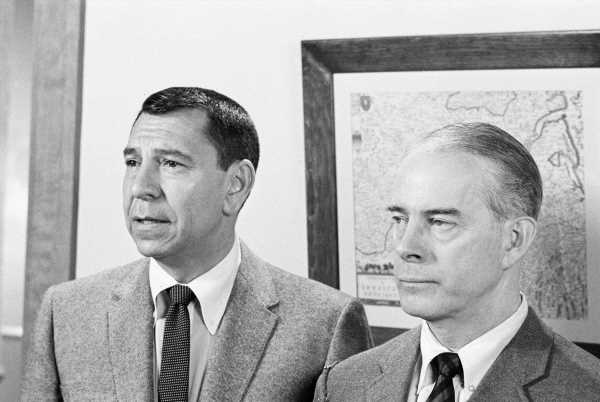 Long before Law & Order, there was another classic crime drama that entertained TV audiences. In 1951, Dragnet premiered on the NBC Network. The police procedural followed Detective Joe Friday (Jack Webb) and his partners as they solved a series of cases. Aside from its suspenseful storytelling, the show is famous for its catchphrase, “just the facts, ma’am.” But fans may be surprised to learn of the iconic quote’s origins.

“Just the facts, ma’am” has become synonymous with Dragnet. As with many TV catchphrases, this one became popular with audiences. Whenever Friday was interviewing an eyewitness, fans could expect him to mutter his famous line. However, the original phrase is much different from what fans might remember.

According to IMDB.com, “just the facts, ma’am” was never uttered by Friday. The original statement was, “all we want are the facts, ma’am.” Friday first spoke the words in the season 2 episode “The Big Lease.”

Comedian Stan Freberg came up with the catchphrase

Dragnet fans might be curious how the “just the facts, ma’am” catchphrase was created if it didn’t come from the show’s writers. Well, they have comedian Stan Freberg to thank for that. Shortly after the premiere of “The Big Lease” episode, Freberg released his parody “St. George and the Dragonet.”

The record is a medieval skit making fun of the TV series and Friday’s character. During one of the scenes, St. George utters the phrase “just the facts, ma’am.” Not only did Freberg’s album help jumpstart a famous catchphrase, but it also earned him lots of acclaim. The record sold over a million copies and spent four weeks in the #1 spot on the Billboard charts.

The catchphrase has been used in ‘Dragnet’ revivals

The original 1950s Dragnet never used the iconic catchphrase; it would be used in several revivals. In 1987, the movie version had Dan Aykroyd’s Friday uttering the line during an investigation. The phrase was also used in promotional posters for the film.

In 2003, Ed O’Neill stepped into the role of Friday for the ABC reboot. Most of the episodes consisted of O’Neill saying the famous line with authority. “Just the facts, ma’am” earned its place in the history of iconic TV catchphrases. It’s all thanks to the creative mind of Freberg.