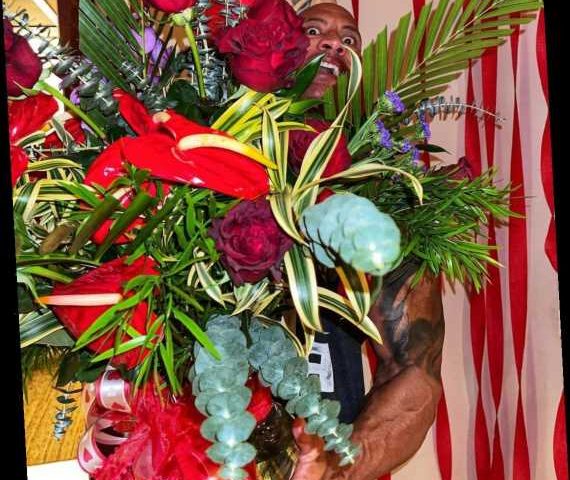 Dwayne "The Rock" Johnson was showered with love — and florals! — this Valentine's Day.

On Sunday night, the 48-year-old actor showed off the gigantic, colorful bouquet he received "from [his] girls," admitting he got emotional upon receiving the thoughtful gift.

"🌺💐🌹🌸 Full transparency, I was shocked when this stunning arrangement arrived and I realized they were for ME from my girls. Then I read the card * swipe left * and that's when I MAY have gotten a little 🥺🥺," wrote Johnson on Instagram, referring to the sweet card written "in code" shown on the second slide.

"I'm at a point in my crazy life that when people I love and care about show me the smallest of efforts — kind and caring — that stuff really moves me," he continued. "Kindness. Caring. Effort." Dwayne Johnson Shares Highlights from Christmas with His Daughters: "I Live for These Surprise Moments"

Johnson appeared on Today Monday morning, chatting with Hoda Kotb about his new series Young Rock, his childhood and not taking his station in life for granted, despite his success.

"I don't think I've ever [gotten to the point where I felt like I've made it] and I'm not quite too sure, honestly, Hoda, if I ever will," said the Hobbs & Shaw star. "So much of my DNA and my constitution derives from not having, which then motivates the work."

"When we were living here in Hawaii, we were evicted off the island when I was 14 years old. That really drove me to want more," Johnson added.

Touching on fatherhood (Johnson has three daughters: Tiana Gia, 2½, Jasmine Lia, 5, and Simone, 19), the star called his kids "the great equalizer to everything in life."

"When you think you have it all handled, they will equalize that," Johnson added, snapping his fingers. "They will provide."

On Friday, the wrestler-turned-movie star opened up about having daughters instead of sons in a sweet Instagram post, sharing a photo of himself walking hand-in-hand with his youngest child, Tiana.

"Every man wants a son, but every man needs a daughter," Johnson began his caption. "All my girls have become the great equalizers in my life — I'm surrounded by estrogen and wouldn't have it any other way 😊"

He continued, "And man I hope she never gets tired of holding these big ol' dinosaur hands, though I suspect one day she will 🦖🤚🏾☺️"