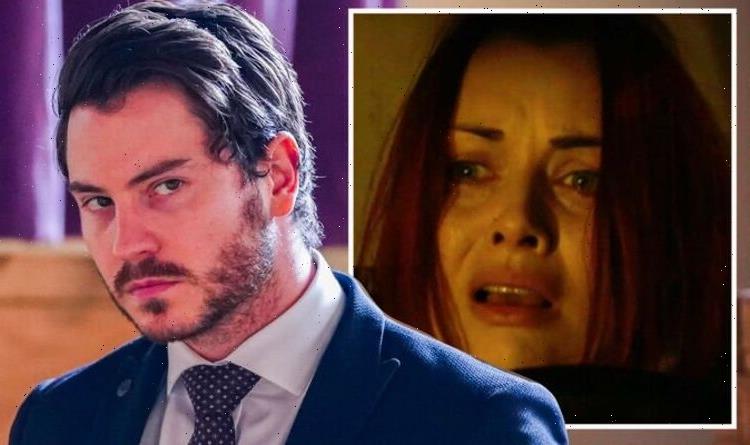 EastEnders: Whitney Dean runs over somebody with her car

Whitney (played by Shona McGarthy) was fundamental in bringing Gray (Toby-Alexander Smith) to his knees in last week’s episodes of EastEnders, with the serial killer now facing intense questioning over the role he played in killing three Walford residents. Though, what the beloved resident of the Square doesn’t realise is her archenemies holds some power over the possibility of her facing time behind bars as he knows she was the one who was behind the wheel of his car last year when Kat Slater (Jessie Wallace) was a victim of a hit and run on the BBC soap. As the police tie up the loose ends involving Gray and the Slaters discover the truth about what happened to Kush Kazemi (Davood Ghadami), Whitney could be going to jail.

The market stall trader was convinced it was Ben Mitchell (Max Bowden) who killed Kush last year, unaware Gray had become obsessed with her and wanted her fiancé out of the picture.

During Thursday night’s nail-biting episode, Whitney finally discovered the truth and will tell Kush’s friends and loved ones the truth as this week’s instalments begin.

Although the character of Gray has now left the show, he could still pull the strings from behind the scenes as the police could arrive on the Square to arrest Whitney.

It was explained last May she had stolen the keys to Gray’s car and run down Kat accidentally as she thought she was getting revenge for Kush.

This was the same vehicle the lawyer has used to move Tina Carter’s (Luisa Bradshaw-White) body after he murdered her.

As he was in love with Whitney at the time, Gray concealed her secret and got rid of the evidence to suggest his love interest was involved in the hit and run.

Unfortunately, his plans didn’t go too smoothly as Whitney’s guilty conscience saw her confess all to Kat about her crimes.

In the time since this happened, the whole incident seems to have been forgotten about but it could come back to the surface as Gray plays his final card.

Whitney could try to plead her innocence, suggesting her rival is making up lies to try and get away with what he did.

However, she could find herself at the hands of the Slaters, who could hold her freedom in their hands over whether they tell the police what she did.

Don’t think she ever intended to do it

With Kush having been killed by Gray because of Whitney, the Slaters could rat her out to the police and explain she was the one who ran over Kat.

Whitney would be devastated to know they had turned her in to the police, meaning she would not be released and rather have to wait for a trial date behind bars.

As the day of sentencing arrives, the market stall trader could discover she is going to be spending a fair few years in jail for keeping her secret.

This would result in the character making an exit from the show after 15 years as she pays for what she and Gray did all those months ago.

After so much heartache over the years, it would be a heartbreaking end to her time living in Walford, but the door could be left open for her to return.

Speaking about the plotline last year, the actress who plays Whitney, Shona, explained how her character got into such a headspace she resorted to almost killing someone.

Shona said: “Whitney was just so fuelled by her rage and grief towards Ben and Phil [Mitchell], I don’t think she ever intended to do what she did.

“She just reacted at the moment, but as reality set in she realised that she had to grapple with the fact that she may have killed whoever she hit.

“The seriousness of what she did set in,” Shona added but will the character now pay for her crimes at the heaviest price?

The actress also discussed the end of Gray’s three-year storyline and hinted loose-ends would be tied up over the coming weeks.

Shona admitted: “She’s exposing him and it’s been coming for a long time. I guess I’m nervous because it’s such a big storyline.

“I hope that people enjoy it, I’m just nervous.

“The thing is when you read the scripts you get an idea of how it might play out but then when you get on set the director might want it a different way.

“It can change at any moment. We were so excited because we’re tying up a lot of loose ends which I think is really important.

“It’s a massive honour actually to be given the final part,” she told The Sun.

There has been no official comment on whether Shona would be leaving the character of Whitney behind her but it could be left until transmission.

The character has been such a huge part of the Gray storyline it would be fitting she left alongside him.

Taking to Twitter, viewers are keen to see the hit and run plot tied up as CJR wrote: “I want the truth about Whitney’s hit and run to be out.

“Not for Ballum, but for her character. I adore Whit, but her willingly keeping it a secret is so unlike her. #EastEnders.”

EastEnders airs Monday to Thursday at 7:30pm on BBC One.