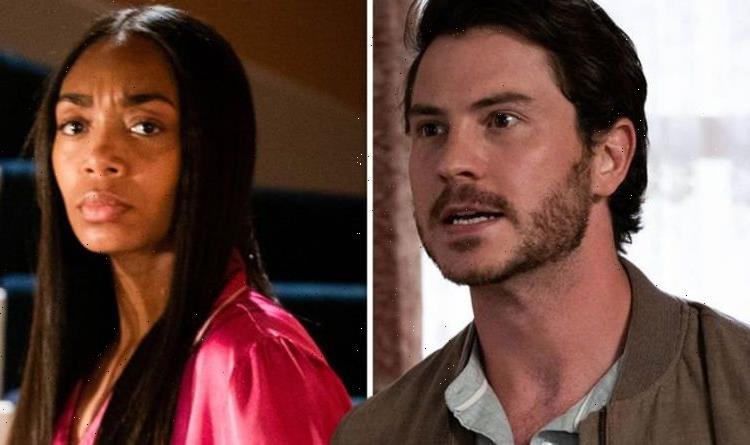 EastEnders: Chelsea and Kim Fox get revenge on Dwayne

Gray Atkins (played by Toby-Alexander Smith) enraged EastEnders fans by murdering Tina Carter (Luiza Bradshaw-White) and Kush Kazemi (Davood Ghadami) after being responsible for the death of Chantelle Atkins (Jessica Plummer). However, it seems he could be set to strike again in the BBC soap but his new girlfriend Chelsea Fox (Zaraah Abrahams) may be safe for the time being.

Ever since Chelsea set her sights on Gray, EastEnders fans have been concerned the lawyer will hurt his new love interest.

However, his boss Laura (Sarah Paul) may be the one truly at risk when Gray takes his romance with Chelsea further.

In episodes that will air this week but are available to watch now on the iPlayer, Chelsea accompanies Gray to a work function.

The event takes place at Ruby Allen’s (Louisa Lytton) nightclub and it isn’t long before the lawyer makes a fool of himself.

Gray makes the most of the free bar and complains about his boss to Chelsea.

He claims she has a vendetta against him because she’s never given him a promotion.

Chelsea listens to Gray but is alarmed when he climbs onto the bar seats and falls over.

She decides it’s time to take him home but unbeknownst to her Laura has been watching her every move.

She calls round to Gray’s house and warns Chelsea to leave the lawyer while she still can.

Laura argues Chelsea is one of many girls he’s taken under his wing only to abuse later on.

Chelsea vehemently points out she can look after herself and won’t be taken advantage of.

But Laura compares her spirit to Chantelle and urges her to get away from Gray.

The next day, Laura humiliates Gray at work and tells him she’s not happy with his performance.

EastEnders fans will remember Tina lost her life when she realised Gray was responsible for Chantelle’s murder.

Earlier this year, Kush was murdered by Gray when he tried to leave Walford with Whitney Dean (Shona McGarty).

Gray already believes his boss is out to get him and if he finds out about her warning to Chelsea it could push him over the edge.

Will Laura become Gray’s next victim if he finds a way to be alone with her?

EastEnders fans certainly think Laura should be wary of the sinister lawyer.

One viewer tweeted: “Is Laura the next target for Gray to kill? #EastEnders.”

“#Eastenders l think Gray’s boss is going to be his fourth victim. We saw him typing anonymously, ‘People like you always get what’s coming to them,’” a second said.

Another wrote: “So Gray, the triple murderer is also now an internet troll? Nearly spat out my tea when he logged on to his fake Twitter to harass Laura, what have they turned this character into? #EastEnders.”

EastEnders continues on BBC One on Thursday at 7.35pm.