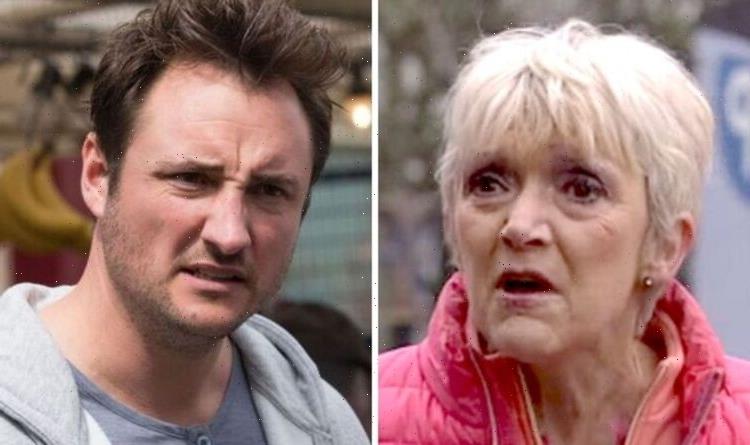 EastEnders bosses have recently recast the role of Arthur Folwer after the previous actor Hunter Bell quit the BBC soap. The new actor, Rocco Brenner, has joined the soap in the middle of a major storyline between Stacey Slater (played by Lacey Turner) and Jean Slater (Gillian Wright). The pair have been feuding over the last couple of weeks as Stacey is desperately trying to help her mother come out of an explosive manic state. However, in recent scenes and scenes to come, it seems Jean has her mind made up and flees Walford for a weekend away with her new boyfriend, Harvey Monroe (Ross Boatman).

Hunter Bell has played the character of Arthur Fowler since 2016 and has seen some major storylines throughout his time on the show.

However, he recently shared on Instagram that he had filmed his final scenes as Arthur as he said goodbye to the soap.

Alongside a picture of himself holding up a signed road sign of Albert Square, he wrote: “After 6 years of my 6-year-old life, I have been a character on #bbcone most popular soap EastEnders.

“From a baby, I was selected to play #BabyArthur. Since then, I matured into the little Arthur Fowler you have all come to know and love.

“However, I personally made a decision that at 6 years old, I want to try different things in life. So this is it, my final hoorah.

“I want to say a huge thank you to everyone that made this happen, my parents, Sarah de Suzie, for truly believing in me, my Tv Parents @laceyturner, @jimmybye and @therealdavood.

“I will take a lot of memories from this amazing experience like my first steps, working with the legendary Dot Cotton, Phil Mitchel, and Patrick also meeting the amazing @patrickberginofficial.

“And last but not least, thank you to everyone that has supported me, shown me, love, sent me amazing positive messages, it means so much, @bbceastenders it’s been a blast.” (sic

Hunter also made a post for the newest actor to take on the role of Arthur, Rocco Brennan and said on Twitter: “I want to say a HUGE congratulations to Rocco Brennan on replacing me as the new Arthur Fowler.

“I am sure you will be a huge success. Looking forward to watching you grow as I did for 6 years.”

The rift between Stacey and Jean began on Monday’s (March 21) episode as they began to argue over Arthur.

Jean was insisting to Stacey that it was time for her to tell the truth about how Arthur’s father, Kush Kazemi (Davood Ghadami), died.

Later, Jean told Martin Fowler (James Bye) that she had ordered a bouncy castle to help keep the spirits high for the children, as Tommy Moon (Sonny Kendall) had been having his own troubles.

However, Honey Mitchell (Emma Barton) was annoyed by Jean’s idea and had a go at her for blocking the street.

Jean exploded at Honey and claimed: “I’m trying to cheer up my grandson, whose father was murdered, so please tell me, what is so wrong with that?”

During the fun, Arthur turned to his mother and Eve Unwin (Heather Peace) and told him Jean had hurt him in the bouncy castle.

Stacey confronted Jean once everyone had gone home, accusing her of hurting Arthur when she pushed him and told her she was no longer allowed to see the children on her own.

“You can see them, just not on your own,” Stacey insisted. “You’re not well. You need help. You need to see a doctor, and until you do, you ain’t seeing the kids.”

In upcoming scenes, Jean leaves Walford for a weekend away with Harvey, but she is set to get into trouble when she begins to frolic about in the sea with a wedding dress on.

EastEnders airs Monday to Friday at 7:30pm on BBC One.