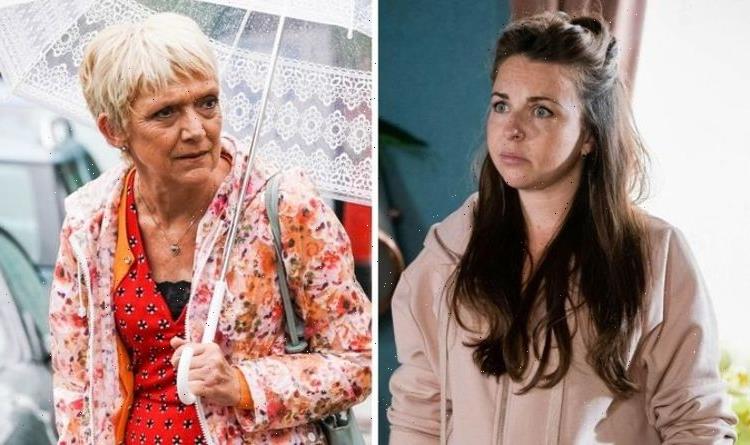 Jean Slater (played by Gillian Wright) hasn’t told anyone that she thinks her cancer has returned, except Ruby Allen (Louisa Lytton). She told her months ago, hoping Ruby would decide not to press charges against Stacey Slater (Lacey Turner). But the troubled club-owner lied, telling her she tried her best but couldn’t help her daughter when in reality she never attempted to help her. More recently, she confessed this to EastEnders favourite Jean and even admitted Stacey hadn’t done anything wrong, because she had never pushed her down the stairs. Stunned Jean left to visit her son Sean Slater (Robert Kazinsky), but before she departed she ordered Stacey to tell Martin the truth. She has recently returned to Walford in the BBC soap though, leaving Ruby on edge about what her next move might be. But she’s been too distracted by the cannabis growing in her garage and wants to get rid of it. Will Jean take revenge by framing Ruby for the drugs?

In upcoming scenes, Jean bumps into Shirley Carter (Linda Henry), who tells her she thinks she may be responsible for a fire.

The police arrive but they end up taking Jean in for a possible drug offence.

While at the police station, Jean refuses to comment about the weed found in her garage but as she gets up to leave, she ends up collapsing.

Ruby tries to explain to Martin what’s going on, but something doesn’t add up for him.

He notices a text on Ruby’s phone from the police, thanking her for her help and informing her that a drugs-related arrest had been made.

Furious at her constant betrayal to Jean, Martin decides to visit Stacey in prison.

He admits to his ex that he messed up, and explains what’s going with Ruby.

Shocked, Stacey tells Martin to sort Ruby out or she will kill her.

Meanwhile, a solicitor is trying to get more information from Jean, pushing her to reveal who put her in touch with the drug dealer if she wants any chance to walk free.

As the questioning goes on, Jean informs them she’s ready to reveal who it was – could she frame Ruby for destroying her family?

Fans have been desperate to see Ruby get her comeuppance for her lies against Stacey, and with Ruby ignoring Jean’s warning about telling Martin, will this be her punishment?

Ruby actress Louisa recently had a baby, and soon her maternity leave will need to be written into the soap – could she end up in jail?

Ruby later takes a pregnancy test and cries when she checks the result – is she pregnant?

She doesn’t have much time to take the news in though, as an angry Martin soon turns up to confront her.

Ruby is forced to come clean and admits she got Stacey arrested and imprisoned for no reason.

If Jean does decide to blame her, and a stunned Martin is likely to take her confession to the police, officers are likely to take Jean’s word, as Ruby has proved she is a liar.

It seems Ruby could end up serving a prison sentence over something she didn’t do – just like Stacey.

After everything she’s done, it’s likely Martin will turn against Ruby too.

He may even back up Jean’s claims about the drugs, and with schoolgirl Lily also out for revenge on Ruby, she could also make false claims about her to see her locked up.

Will it be enough to get Stacey released from prison early?

Stacey has no idea about her mum’s illness, but Jean hopes Stacey will be out before it’s too late.

Having sat on the information that her daughter is actually innocent for a couple of weeks, Jean was likely plotting her revenge against the club owner.

Now that Stacey is back on screens, with Martin visiting her, it seems possible the character may be set to make a come-back to Walford.

Actress Lacey had also been written out of the soap on maternity leave – could this be how her character comes back to the Square?

Hopefully, Stacey will be home to spend some time with Jean before she takes a turn for the worst but will Ruby pay for her manipulative lies?

EastEnders continues on Thursday at 7.30pm on BBC One.