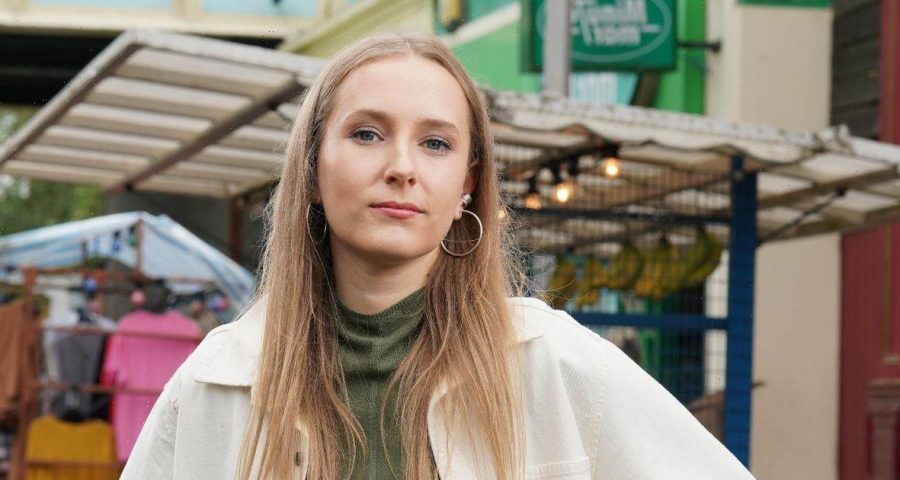 EastEnders star Rose Ayling-Ellis is set to leave the BBC soap, with her exit teased to be taking place this week.

The Strictly Come Dancing winner has become a household name in the years since joining the soap, after she and her pro partner Giovanni Pernice stormed the competition and melted the hearts of viewers at home.

Since then, the actress has gone on to achieve new heights – staying close to Giovanni and even being named the Inspirational Person of the Year at the Visionary Honours Awards.

READ NEXT: Why is Rose Ayling-Ellis leaving EastEnders and when will she go?

However, her exit from her much loved role as Frankie Carter in EastEnders has left fans devastated.

Born on November 17, 1994, 27-year-old Rose grew up in Kent and her love of acting was sparked by attending a performance course run by the National Deaf Children’s Society.

Having landed her first role in the BBC miniseries Summer of Rockets, she also made an appearance in the music video for Middle of the Night by chart-topping boyband The Vamps.

Rose starred in the video as one half of a young couple, with some of the lyrics communicated through sign language.

Fans praised the video for representing and bringing awareness to the deaf community in the video, which was released to coincide with Deaf Awareness Week.

As Strictly's first deaf contestant, Rose broke boundaries in this new milestone for the programme, as she revealed that she hoped to be the representation that she said she didn't see herself on tv growing up.

She told The Guardian: "Nothing is impossible, and I know that a lot of deaf children grow up in society that thinks that it’s not possible [for them to succeed]. But no – you can do it."

Rose also paid tribute to her Strictly dance partner Giovanni on Instagram following their Game of Thrones inspired performance during the competition.

Sharing a video of the two in costume, Rose said: "I am so proud of us. Giovanni is the most hard working, passionate, caring person ever who really believes in me.

"He really does bring out the best in me and a lot of credit goes to him on creating this amazing routine.

"The earliest 40 Strictly ever had. WE MADE HISTORY!"

That wasn't their only Strictly glory though, as on December 18, they were crowned winners of the show, beating John Whaite and his pro partner Johannes Radebe in the finale.

On TV, Rose is best known for playing Frankie Lewis on BBC soap EastEnders, the daughter of Danny Dyer's character Mike, who has been embroiled in some of the soap's darkest storylines since joining in May 2020.

However, many viewers were left devastated when the actress revealed that she was leaving the soap after two years.

Speaking about her exit in a statement, Rose said: "It's been incredibly special to be EastEnders' first regular deaf actor.

"I have loved my time on the show and Frankie has been such an awesome character to play, however now feels like the right time for me to move on and I am excited and ready for new challenges.

"I will always treasure my time on the show and all the incredible people I have worked with, who have supported my growth as an actor these last two years and given me so many amazing memories.

"I am excited for viewers to see Frankie's exit storyline; I think it's a really important one that will hit home for lots of people."

While no plans have been revealed for Frankie's exit, it is highly expected that the character will leave for a new job in Scotland, after being offered the chance to move with a student she has currently been tutoring.

The couple were together for seven years and while they kept their relationship private, they did occasionally share glimpses into their life, such as their trip to the Amazon where the couple travelled along the river back in 2019.

However, Rose recently split from Sam, with the couple saying that the split was "amicable," according to The Mirror.

A friend said: "They spent a lot of time apart while Rose was away on tour, which has had an impact.

"It’s been difficult for them both, of course, but they’re certain it’s the right move — and Sam’s had a shoulder to cry on in their mutual friend Aimee."

Since lifting the glitterball trophy together, Rose and professional dancing partner Giovanni have formed a sweet bond with one another.

The Strictly Come Dancing winners also reunited at the TV BAFTAs earlier this year, where they took home the award for Must-See Moment.

Their victory was based on the couple's stunning silent show dance routine to Clean Bandit and Zara Larsson's Symphony, which left viewers of the BBC One programme in tears when it originally aired in November last year.

It has been reported that Rose also recently met Giovanni's family during a recent visit to her dancing partner's hometown of Sicily.

In a photograph obtained by The Sun, Rose could be seen with Giovanni at his sister Angela's dance studio in Sicily – with Rose also meeting Angela during her visit.

The snap shows the pair with their arms wrapped around one another, and also includes an appearance from Strictly judge Anton Du Beke.

Giovanni's friendship with Rose has also had a huge impact on his life, with the star revealing recently that he was learning British Sign Language.

A source told The Mirror: "Rose helped Giovanni see the world through new eyes and he’s dedicated to learning sign language for her."

Rose praised her co-star in the comments section, saying: "Love this very much."