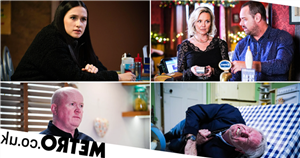 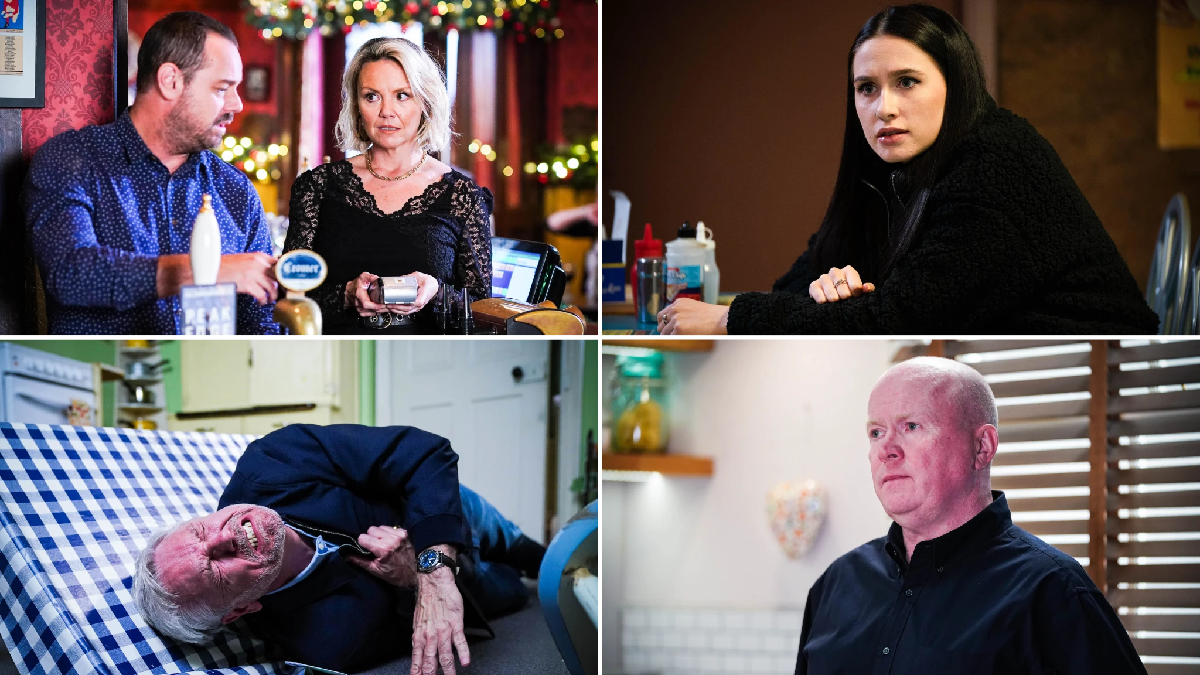 There’s a crisis in EastEnders as Rocky (Brian Conley) collapses in disastrous scenes – and when Dotty Cotton (Milly Zero) sees him being rushed away in an ambulance, will she re-evaluate their scheme and her plan to flee?

Elsewhere, cunning Janine Butcher (Charlie Brooks) is getting on very well with Mick Carter (Danny Dyer) as she uses her charm – but how far is she prepared to go and what is she after?

It’s the day of Rocky’s court appearance for keying Ethan’s car. Things get worse for him when Dotty’s mum Sandy returns to Walford. Dotty tells Rocky that she needs him to scam Peter for more cash, as she wants to pay for Sandy’s rehab.

Later, Sandy becomes suspicious over Rocky’s presence in Walford. Rocky gets nervous and tells Dotty that he plans to leave Walford tomorrow.

Denise and Chelsea discover that they’ve both booked their wedding and civil ceremony on Christmas Day. Gray becomes worried about the expense and asks Chelsea whether they could delay things.

Chelsea fears that Denise, who thinks they’re rushing into things, has talked Gray out of it. She becomes adamant that the ceremony will take place on Christmas Day as planned.

Sharon tells Phil about the situation with Alyssa.

Janine suggests that Mick should sponsor the Square’s Christmas tree.

Rocky is still planning to flee from Walford, but Kathy interrupts and asks him to help her out at Walford East. Rocky reluctantly goes along, but is stunned when this turns out to be a surprise party for his 60th birthday.

Rocky tells Dotty that he has decided to come clean to Kathy and Sonia. He writes a letter to the two of them, but suddenly clutches his chest and collapses.

Peter confronts Janine and Mick for outbidding him over the Christmas tree sponsorship. He soon reveals that he has retaliated by outbidding them himself at the eleventh hour. However, Mick is shocked as Janine prepares to fight back.

Gray gets an idea when Chelsea says they’ll need a new car once they’re a family of five.

Kat is jealous when Phil buys a gift for Sharon and Alyssa.

Phil meets Jada and decides that he doesn’t trust her. He confides in Kat about this, then questions Jada on why she left Alyssa on the doorstep. Phil urges Jada to walk away again, but Sharon is disgusted when she overhears him meddling like this.

Peter smugly admires the new Christmas tree after his success with the sponsorship. Mick gives Janine his blessing to take Peter down a peg or two.

Rocky lies unconscious after his collapse. Dotty tells Sandy about paying the deposit for her to go into rehab, but is disappointed when Sandy seems more interested in the money.

Later, Dotty is shocked to see Rocky being taken off in an ambulance.

Peter confronts Mick and Janine after finding the Christmas tree missing. Later, Mick supports Janine after she shares a memory of her father.

Sandy isn’t getting along with Tiffany and doesn’t want to stay at the house anymore. Vinny offers Dotty and Sandy a bedsit which is owned by the Panesars, but Sandy will only stay there on one condition.

Vinny is pleased to be helping Dotty, but it’s clear that there’s still more than friendship on his mind.