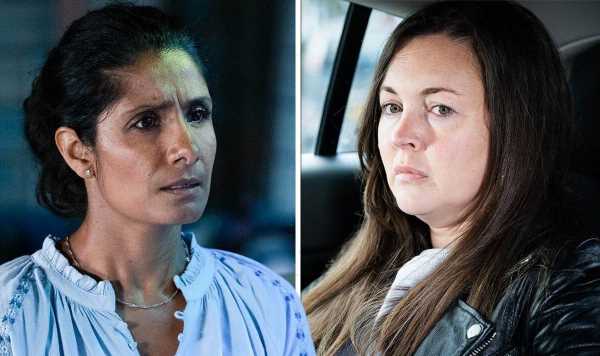 BBC soap fans will know Eve Unwin (played by Heather Peace) is extremely protective over Suki Panesar (Balvinder Sopal) and her best friend Stacey Slater (Lacey Turner). However, as their respective families become intertwined, EastEnders star Heather teased a tough decision could ruin her relationships if she was forced to choose between the two most important people in her life.

Stacey is currently in a relationship with Kheerat Panesar (Jaz Deol) who is struggling to keep a hold of his position as the head of the Panesar clan.

Meanwhile, Suki has been struggling with her sexuality and falling in love with Eve.

In recent scenes, Kheerat felt betrayed yet again when he realised his mother had been keeping secrets from him concerning Ranveer Gulati (Anil Goutam) death.

Spoilers confirm Suki will be arrested for Ranveer’s murder and this may be the final straw for Kheerat.

Stacey would likely take her boyfriend’s side and Eve may feel torn between supporting Stacey and protecting Suki.

Speaking to Express.co.uk at the Inside Soap Awards 2022, Heather revealed Eve would never feel comfortable choosing between Stacey and Suki.

She said: “I don’t think she could navigate that she absolutely adores [Stacey].

“The gay girl/straight girl friendship has been wonderful to explore.

“I can’t recall having seen that anywhere else and that’s my life. I have so many strange girlfriends and it’s never been anything weird.

“I don’t know what she’d do she would absolutely keep them both and try and navigate a way through.”

Will Eve provide the key to keeping the Panesars together as she provides an invaluable pillar of support for Suki?

The EastEnders star reflected on Eve’s strong feelings for the Panesar matriarch.

“She genuinely loves her,” Heather explained.

The actress revealed she asked EastEnders producers to make a change to a recent powerful scene between Suki and Eve.

EastEnders fans will remember Eve finding Suki roaming around the square in her nightdress.

Heather explained: “There’s a scene where Suki comes running through the square in her night dress and Eve grabs and the stage directions said that Eve was drunk.

“I thought I’m not very good at playing drunk and there were a lot of scenes then I would have to play drunk [that were] quite straight and I think Eve when she’s like struggling and is heartbroken probably goes to Soho and picks someone random up.

“They were like, ‘Why is Eve arriving on the square at 6am?’ Because she’s gone out, she’s not drunk, she’s gone home with some random.

“I don’t honestly believe she’s actually had this actual love I don’t think she knows what to do with it.”

EastEnders airs on BBC One from Monday to Thursday at 7.30pm.