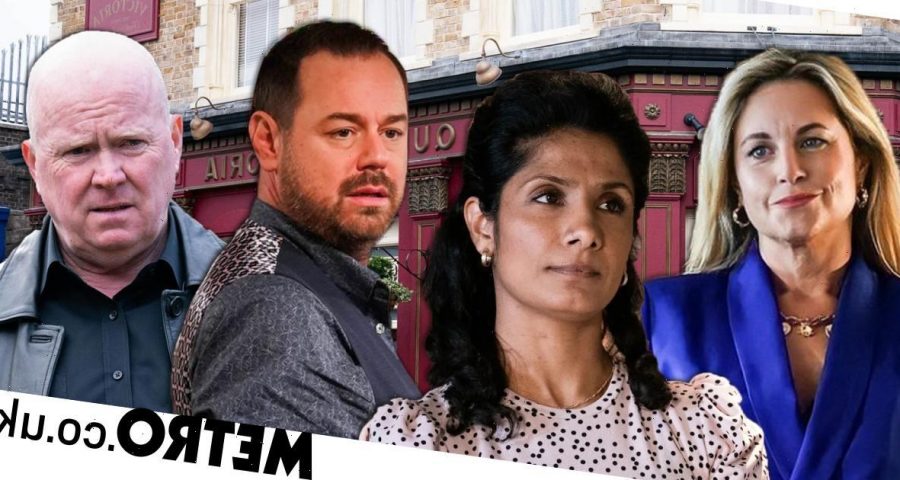 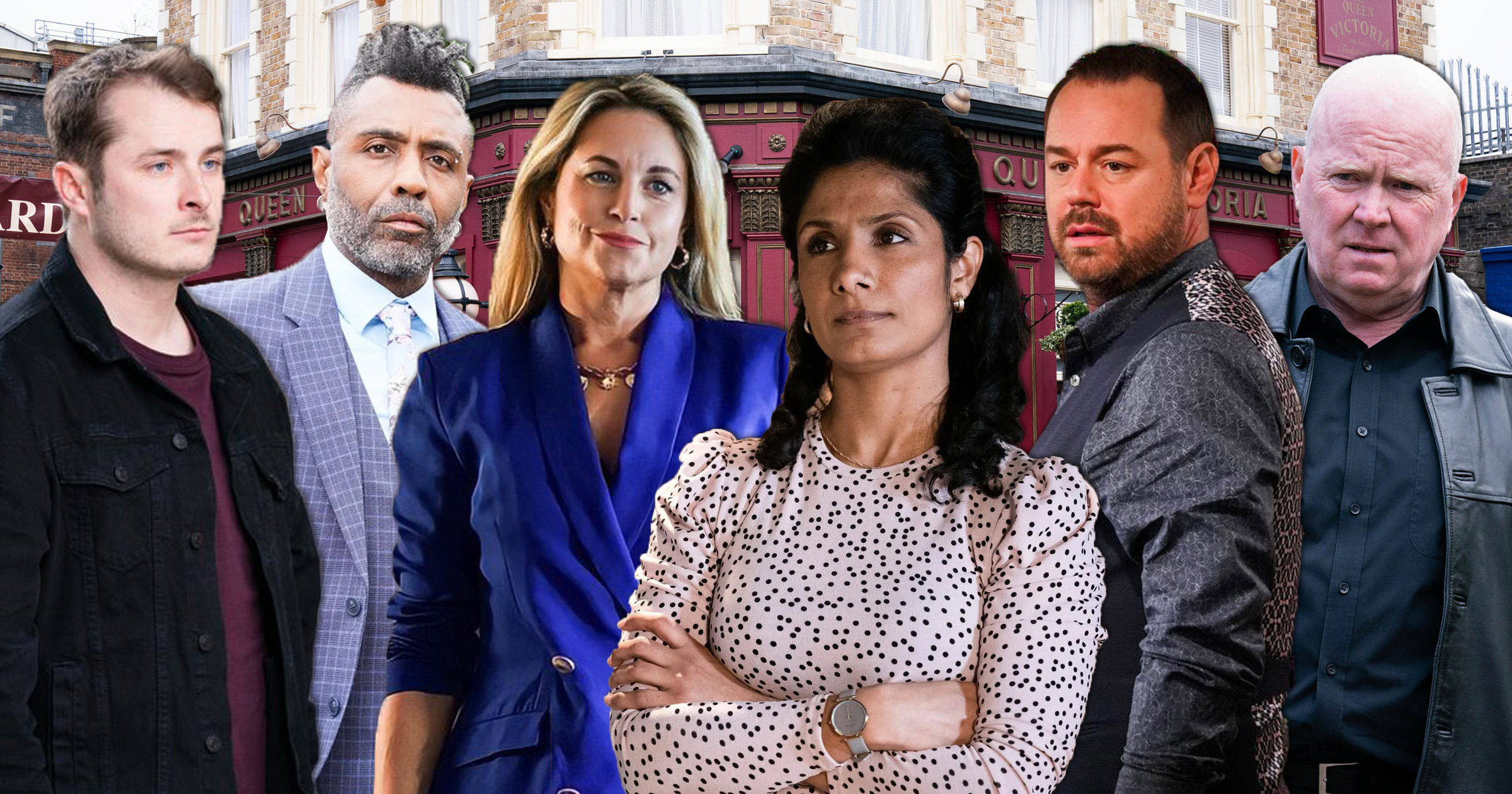 Changes are afoot at EastEnders – a new producer has arrived on a new set, there’s a new family, and some big new storylines.

And it can all soon be watched in weekly chunks on a new stab at the whole box set experiment.

A definitive summer for a soap that is preparing to get those cylinders fired into action again – it has been well documented from cast interviews and recent announcements that summer is going to be all in for EastEnders.

Metro.co.uk recently revealed that there will be at least five departures from the show this summer and it was also confirmed that a brand new clan is heading to town – with more newcomers promised.

With a (hopefully) temporary move back to box sets for a sport filled summer, new boss Chris Clenshaw has insisted that Albert Square is the place to be no matter where you watch it.

He enthused: ‘With such a big summer of sport ahead, box setting all four episodes again this year feels like the perfect solution to enable EastEnders viewers to choose when and where they want to get their weekly fix from Albert Square.

‘We have a big summer ahead so this is the perfect way to ensure that no one has to miss out.’

So what’s coming up?

It seems that Phil Mitchell would rather rot in prison than to give so much as a morsel to the filth.

But jail time is a bit different to his own life – and when he makes a sinister and very dangerous enemy behind bars, he is out of his depth.

Facing death, will Phil change his mind and make a deal with what he perceives as the devil?

Or will his new enemy bring about the end of the almighty Phil Mitchell?

What is Sam’s big plot?

Sam has made her mark since arriving back in Walford and has ruffled more than a few feathers, effortlessly getting under the skins of Sharon and Kat.

And, as the Mitchells are thrust into the focus of the action, Sam is hiding some secrets and executing a surprise plot.

Her true intentions are set to be exposed and the ramifications will be far reaching for several residents.

Mitch is in for a surprise when his brother Avery turns up – along with nephews Felix and Finlay.

There is already tension between Mitch and his sibling so the reunion isn’t one of real jubilation.

But there is even more at play when it becomes clear that Avery is hiding something quite significant – Mitch is in for a shock.

But what dynamics will this bring?

And what mark will Felix and Finlay make?

Janine sparks the end for Mick?

Mick always risked getting his fingers burnt when he got close to Janine and, as always, she is a ticking timebomb.

The more that Janine grows to realise that the love between Mick and Linda will never die, the more dangerous she becomes.

Harbouring the secret that she framed Linda for the car crash which almost killed her, Janine is on a knife edge herself.

But she has proven that her more sinister nature still very much exists.

And with Mick set to exit towards the end of the year, his relationship with Janine could well be a catalyst to a major downfall.

Kathy is doing everything she can to be there for her traumatised son Ben, but the demons inflicted upon him by evil rapist Lewis will continue to plague him.

Ben has talked himself out of reporting Lewis to the police and his battered mental health will continue to crumble.

In true Mitchell fashion, things are going to come to a head as Ben loses control.

Things are going to get worse before they get better…

The Panesar family has long been a clan of in-fighting and turbulence, overseen by acidic matriarch Suki.

But the clan are set to face one of their biggest challenges to date which lurches them into a new crisis.

While the arrival of daddy Panesar on the scene has yet to be confirmed, it was recently confirmed that he is being released from prison.

And, given that he was incarcerated for murder, this could spell real danger for the Panesars and the Square if he were to rock up.

Stuart’s mind is all over the place as he can’t bring himself to find love for his son Roland.

Plagued by post natal depression, Stuart is in a seriously bad way and Rainie’s long held dream of being a mum hang by a thread.

With Stuart effectively rejecting Roland, what will this mean for the future of the family?

Is Rainie going to be forced to make a heartbreaking choice?

With Stuart set to make an exit from the show, will Rainie decide that her marriage can’t survive if she wants to be a mum to Roland?

Passion for Peter and Dana

There are fissions of sexual tension between Dana and her ex Bobby’s brother Peter and, after a misplaced kiss attempt, this isn’t likely to go away any time soon.

As things intensify, passion could be set to follow but how would Bobby react to find out what is happening?

Both Dana and Peter are set to say goodbye to Albert Square but as Dana heads off to university, will Peter head off with her?

Or will she decide that she is better off going it alone, leaving Peter to face the music with Bobby and ultimately decide that he needs to get away from the family he has upset once more

The end for Lola

A very final exit is ahead for Lola later in the year and, while details are very sparse in relation to the circumstances, it seems that there is tragedy afoot.

With Ben in a seriously bad way after his ordeal, it remains to be seen whether his spiral out of control might impact Lexi and lead to Lola coming to odds with him.

And then there’s Jay – are there potentially still feelings to be explored before Lola’s final curtain?

Whatever happens, the summer will likely set the groundwork for what looks set to be an explosive departure which will leave a lasting impact on those left behind.

Jada is also heading off for pastures new after deciding that any welcome on the Square is worn out.

Again, it is not confirmed exactly how she goes – and how it will impact Sharon to say goodbye to Alyssa too – but fans do know that Denny’s 16th birthday is coming up.

Could that be connected?

And on what terms will Jada leave when it comes to Sharon and Zack?