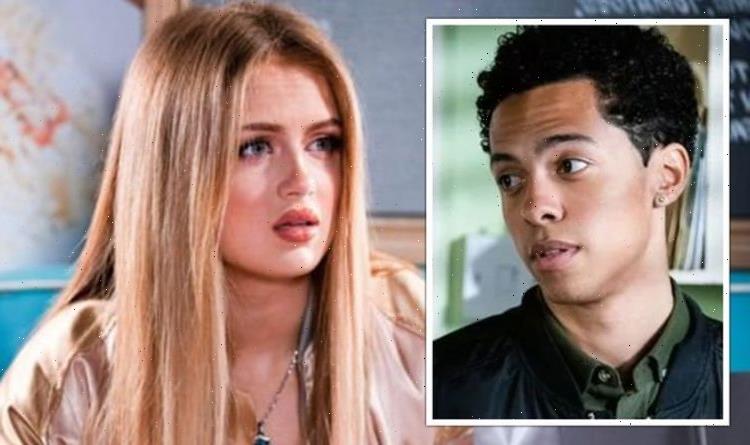 EastEnders: Frankie Lewis knocks down Nancy with her car

EastEnders fans could soon see a dramatic breakup on the hit BBC soap as married couple Tiffany (played by Maisie Smith) and Keegan Butcher-Baker (Zack Morris) head down a rocky path. In recent scenes on the soap, Tiffany has become passionate about setting up a business venture based around beauty. But, her obsession with looks may cause a rift between her and Keegan in upcoming scenes. Will her insecurities cause the pair to break up and could this be Tiff’s exit storyline?

In recent scenes on the BBC soap, Tiffany has seen Keegan’s business go from strength to strength.

As a result, she wants to keep herself busy and earn some money herself by working in the beauty industry.

Recently, Tiffany met with a beauty brand owner, who convinced her to have some fillers.

She ended up spending lots of money on the beauty treatment without giving the decision much thought.

According to official soap spoilers, Tiffany’s obsession with cosmetic treatments is set to continue, but could it cause a rift in her relationship?

However, she does warn her that they are dangerous especially if she is pregnant.

Tiffany insists Bernie takes a pregnancy test just to be safe and even goes as far as to buy the test herself.

Rainie Cross (Tanya Franks) sees the pair chatting and is adamant she will be there when Bernie takes the test.

Elsewhere, Keegan is thrilled to hear he has reached the final three off Walford’s Best Street food.

While talking to a journalist, he spots Tiffany who is in the shop buying Bernie’s pregnancy test but believes that it is for her.

Later on, at home Tiffany opens the pregnancy test just as Keegan comes in through the door.

Bernie eventually blurts out the truth to Keegan, admitting that the test is for her.

Later Karen Taylor (Lorraine Stanley) is still angry and confronts Bernie who gives her some home truths, this money paid their bills.

Vi Highway (Gwen Taylor) tries to set Keegan up with a random girl making a rude comment to Tiffany who tries to hide her hurt.

To make matters worse, while in the market Tiffany sees Keegan with journalist Beth and compares herself even more.

Could Tiffany struggle with jealousy seeing Keegan around other women?

As the evening nears, Tiffany tells her husband she is getting a facial.

Keegan ends up winning the award, just as Tiffany enters, with a disturbing rash on her cheek.

Tiffany’s unaware her face has been marked and when she is finally told by Keegan how her face looks, she is mortified.

Clearly embarrassed, she leaves Keegan, but insists he says to enjoy his night.

As Tiffany begins to obsess more over her looks, it looks as though her insecurity is becoming a problem.

If she continues down her path of beauty addiction, it could cause tension and jealousy in her relationship with Keegan.

Will the pair end up breaking up if Tiffany becomes jealous of Keegan being around other women?

This could be the perfect exit storyline for Tiffany – after the actress, Maisie announced she was leaving the soap after 13 years, earlier this year.

This week’s EastEnders episodes are available to watch on BBC iPlayer.