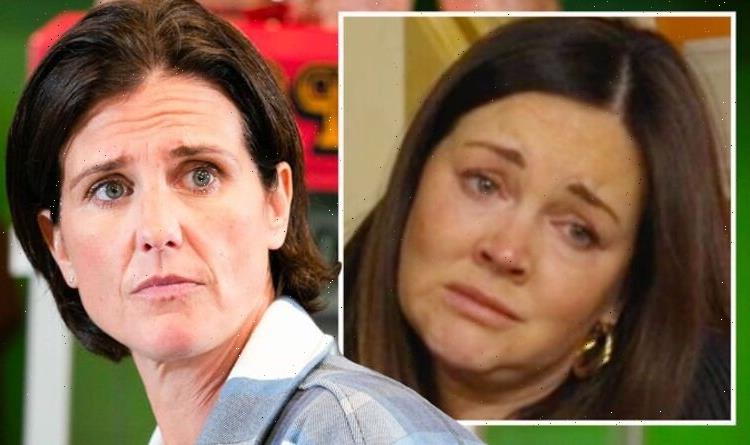 Eve (played by Heather Peace) has become one of the most beloved characters on EastEnders in recent months because of her rivalry with Suki Panesar (Balvinder Sopal) and for helping Stacey (Lacey Turner) adjust to life outside of prison. However, it was never confirmed how long she was meant to be on the BBC soap and with many loose ends being tied up lately, she could be one of the next characters to leave. With regards to how she could make her departure, Martin Fowler (James Bye) could have something to do with it as it seems he and his ex-wife could be reuniting very soon.

When Stacey returned to the Square last year, she revealed she had married Eve behind bars as the pair had struck up a friendship in jail.

This was all part of a bigger plot though as it was explained the troublemaker had been in prison for years and needed a way out.

If she was married to someone and could tell her parole officer she had a registered address she was living at, she would be released.

Stacey agreed to this and the pair have convinced many of their neighbours they are in a loving relationship, despite the iconic Slater character not being interested in women.

Following the downfall of Gray Atkins (Toby-Alexander Smith) recently and discovering Kush Kazemi (Davood Ghadami) was killed by the villain, it seems Eve’s wife and her ex-husband will find comfort in one another over their loss.

According to reports, the actors who play Stacey and Martin, Lacey and James respectively, have been spotted filming on-location in Southend-on-Sea.

The pair look very cosy with one another as they enjoy a day out at the beach but it doesn’t seem the characters’ children are with them.

This is because this could be a date the former lovebirds have decided to go on as they want to give their romance another shot.

However, knowing how much people would be opposed to the idea, they could decide they are going to see each other in private.

With Eve at risk of going back to prison if she wasn’t married to her wife, this is another reason Stacey would want to keep the relationship under wraps.

Those were all prior commitments

When Eve does find out, however, she will have a lot of questions as to why Stacey felt she needed to keep this information from her.

Although the iconic character would try to explain herself, Eve might not buy it as she knows their friendship is a lot stronger than Stacey would be making out.

With her career on the line after Gray’s arrest and with no need to stay on the Square, Eve could decide she is going to move on.

The troublemaker would know it would only be a matter of time before the authorities got wind of her divorce and would reassess whether she needed to return to prison.

Valuing her freedom more than anything, the character could decide to go on the run is going to be better than waiting for the inevitable.

It was reported last year the actress who plays Eve, Heather, would be taking a break from the show later this year as she goes on tour with her music.

Speaking about the plans last year, the soap star said: “I had almost finished the EP when I got the job at EastEnders. I will release that in January. I won’t do it now because it’s all Christmas songs being played.

“And I’ve got a tour in April – it’s the April 2020 tour that is now April 2022! Those were all prior commitments before signing on the dotted line,” she told What To Watch.

Therefore, the trip to South-on-Sea could be a mission for Stacey and Martin to try and track down Eve after she discovers their secret.

Martin and Eve have never seen eye to eye but he could know how important the former jailbird is to his wife and will want the best for her.

Even though he and Stacey would be getting their romance back on track, he would still want Eve to be a part of their lives.

She has helped raise his children for the past few months and she has become an additional parental figure to them all.

To rip her away from them would be heartbreaking and so he could come up with a plan to keep her out of jail.

Martin could tell Stacey they won’t get married again so she can continue to be wed to Eve, but they will start a new chapter of their relationship on the sidelines.

However, once the novelty wears off, will the agreement be held up when Stacey finds it a struggle to split her time between the two of them?

Taking to Twitter, viewers have been sharing their thoughts on Eve, with Eights writing: “Ohhh if Eve needs a little exit story, I can see in the very near future her and Suki running off together #EastEnders.”

Shabbat posted: “Stacey/Eve might legitimately be the strongest marriage on #EastEnders at the moment.”

CJR commented on the social media platform: “Eve has become one of my favourite characters so fast. #letsgolesbians #EastEnders.”

Jessica added: “Eve has to be one of my favourite Eastenders characters, she’s just so great #EastEnders.”

EastEnders airs Monday to Thursday at 7:30pm on BBC One.