She’s got pregnancy cravings for dirt, confusing sexual feelings for her prisoner/husband, and alligators and bears randomly showing up at the palace. When you’re Empress Catherine on Hulu’s “The Great,” you’ve got to be at home taking big swings.

“You can’t be embarrassed with comedy…I think that’s the number-one thing you have to be comfortable with: trying the crazy idea and going for it,” said star Elle Fanning during a recent interview with IndieWire. “I remember the macaroons on Paul during the baby shower. I do a little [backbend] bridge and surf macaroons down on my pregnant stomach. That was my idea! So I’ve definitely grown; I don’t know if I would have come up with that in the first season. But now I’m really living in Tony’s land for so long. You start to kind of morph into thinking like him and trying to [embody] the bigger, the weirder, the better.”

“Those scenes where we get to kind of have those spitfire back-and-forths, it’s like that movie ‘Bringing Up Baby,’” Fanning said. “We talked about that a lot. It’s so just back-and-forth and in the rhythm! And quick! Nick is someone who’s my partner in crime. I love him to death, and we really go into this other gear and zone when we’re doing those scenes together. We really challenge each other…[What’s exciting is], we can kind of go anywhere because you love to hate them, but then you’re like… am I supposed to hate them? [Because] I also kind of love them together!” 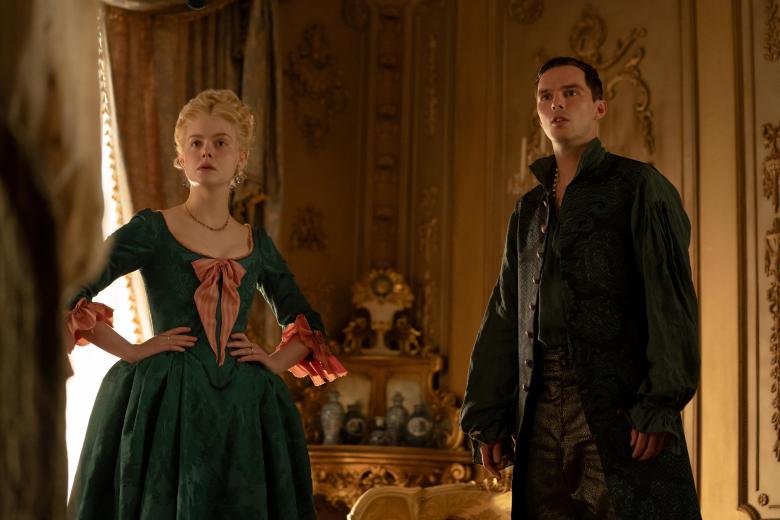 Elle Fanning and Nicholas Hoult in “The Great”

Talking with Fanning about her incredible TV year, it’s obvious how passionate she is about “The Great” and the opportunities it has afforded her. “That character and that script, it’s my sense of humor,” Fanning said. “I know that that might surprise people! I’ve never done comedy to that degree. It’s such a gift that [Tony] wanted me to play her… I was like, I have to do this.”

She’s been involved with McNarmara’s pitch from the very beginning, overseeing the development of Catherine and tracking her growth as both a ruler and, in the second season, a rather ambivalent mother. Through the Hulu comedy, Fanning became an executive producer on a television show for the first time. The fact that Catherine’s journey is symbolically similar to hers isn’t lost on the actress.

“That first season was very much kind of me finding my voice the way that Catherine was,” Fanning said. “And then [in] the second season, I got more opinionated much like her. It’s just been very special, this show. We’re about to do our third season, [and] I’m very aware of what a turning point it is for me and my career and my life, and she means a lot to me.”

The show is a veritable feast for any actor, allowing Fanning to give big rally-the-literal-troops speeches as well as have tearful, quiet moments of doubt. She gets to go toe-to-toe with not just regular scene partner Hoult but also Gillian Anderson, who portrayed her mother in a handful of episodes in Season 2 (RIP). “The Great” has many teacups in the air, but a consistent pleasure that centers it all is Fanning’s perfect, all-consuming reactions, which can go from ecstasy (usually thanks to her husband/prisoner Peter) to fury (yup, same husband) in seconds.

“My face is very expressive, like I make a lot of crazy faces!” Fanning said. “It’s kind of elastic, so I’ve definitely learned to use that to my advantage with Catherine. She doesn’t hide a lot of things well in her face. And that’s something that I had experimented with. I think in the second season, [I’ve] become a bit more uninhibited. [I’m] less embarrassed and kind of go for the wild expression, or at least try it because sometimes that’s what you need.”

That lack of inhibition came in handy for one of the hardest scenes Fanning shot in Season 2: giving birth to baby Paul. “I didn’t have to memorize anything,” Fanning said. “So I was like, ‘Whoo-hoo! I just have to scream.’ But I wanted that to be accurate. [It wound up being] a full-on day of moaning and groaning and screaming. I was running on adrenaline! That was kind of fun. But I was definitely making myself very flush…. This show is extremely challenging. As fun as it is, it takes every part of your being to be able to make it through each day. It is quite taxing, but the payoff — it’s such a brilliant feeling.”

Fanning took that newfound confidence to Hulu’s “The Girl from Plainville,” which aired its finale Tuesday. Here, Fanning pivoted to something completely different: playing real-life troubled teen Michelle Carter, who encouraged her boyfriend to kill himself and was convicted of involuntary manslaughter in a case that made national news. In the eight-part miniseries that also starred Chloë Sevigny and Colton Ryan, Fanning found new layers in a true-crime tale otherwise reduced to headlines about teens and texting.

“When they came to me [about] this project, I was a little tentative about signing on because I knew that it could easily be just sensationalized and kind of romanticized and not told in a thoughtful way. I really wasn’t interested in doing that,” said Fanning. “But it’s showing, I think, the complexities and nuances of navigating technology and the blurred line between fantasy and reality. [That is] what intrigues me the most, because I live in a fantasy land a lot of the time, and you have to remind yourself to keep yourself grounded.” 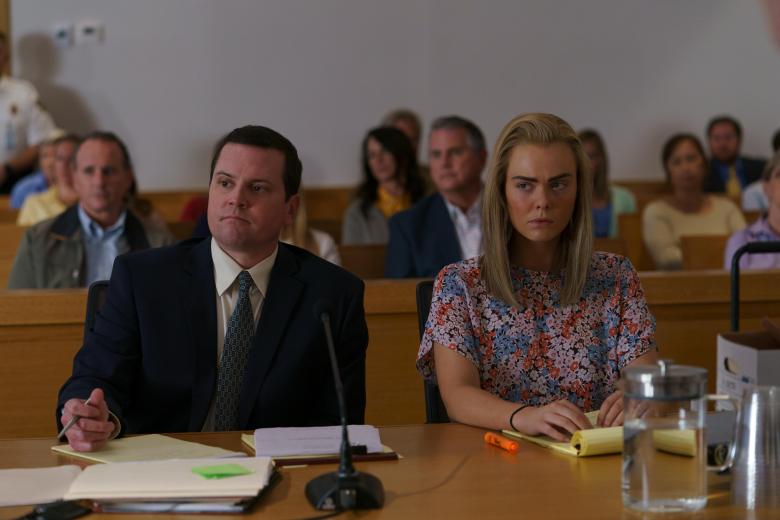 “The Girl from Plainville”

Fanning is eminently watchable throughout, but she really soars with her choices to show the layers of performance at play. There’s Fanning portraying Carter, but a central conceit of the show is that Carter also “performs” for an imagined audience. That would be tough enough to communicate, but in one of Fanning’s most memorable (and disturbing) scenes, she is portraying Carter as Carter is imagining herself as Lea Michele on “Glee.” Lea Michele is doing some complicated performance art herself, mourning in character as Rachel Berry for her dead onscreen boyfriend Finn (Cory Monteith), whom Michele was dating in real life as well. It’s a lot, and Fanning nails every eerie, bone-chilling second of their “Make You Feel My Love” meta-bedroom mirror performance.

“I knew that was The Scene,” Fanning said. “At the end of the pilot reading that script, I was like, ‘Wow.’ I couldn’t wait to [film it], but I was also terrified of doing it. I’d never really fully watched ‘Glee’ before. So that was my homework. I had a legal pad, and I wrote down every single time [Lea] closes her eyes on that word [or] what [the] gesture is. I would film myself in my apartment and then watch it back next to the computer to make sure I got it right. I wanted it to be accurate because I knew that the specificity of that would really be eerie and disturbing.”

She got it right: The moment adds spooky layers and threads a difficult needle of showing a complicated person without making excuses for them. “I wanted to [show] the emotion in Michelle is real but then at the same time, her tears are falling at the exact same time that Lea’s [are] so I had to match her emotion. When she was getting emotional in the song, it was a real exercise [for me]. I’ve never done anything like that before….We did that for six hours, then they used the first take!”

Elsewhere in “The Girl from Plainville,” Fanning had other opportunities to stretch, whether it was imagining a full dance musical number (yup, a la “Glee” once again) or performing heartbreak for classmates. Through her, viewers can so clearly see the character’s ache for some real friends, as well as the protective, dissociated mask she donned in the intense courtroom scenes.

And after getting her feet wet on “The Great,” Fanning is also an executive producer on “The Girl from Plainville,” and set up a production company with her sister Dakota at the beginning of lockdown. “Being a young actor…I wanted to be in that group,” she said about producing. “I wanted to see what was behind the curtain. So I’ve gotten to do that more. And I really, really, really enjoy it.”

So far, the duo have acquired female-driven material that one or both of them could potentially star in, but Fanning is also eager to spotlight work in which she won’t act. “It’s a way to keep the creativity flowing and get to contribute in [a different] way. I did a podcast as well! So it’s all different mediums. God, there’s so much to explore with that.”

“The Great” and “The Girl from Plainville” are streaming on Hulu now.