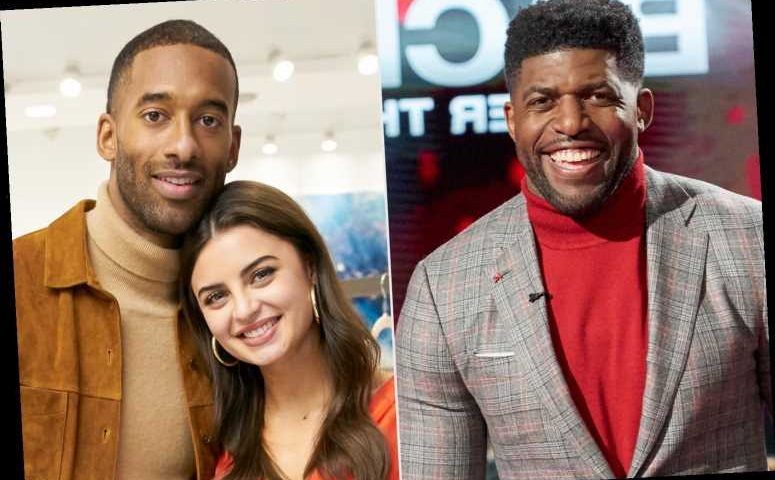 Emmanuel Acho is the first to admit that this season of The Bachelor has been a complicated one to watch.

The former NFL star-turned-activist, who was tapped to fill in as host of the upcoming After the Final Rose special, made an appearance on The Late Show with Steven Colbert on Wednesday, where he shared his thoughts on Matt James' final two women, Michelle Young and Rachael Kirkconnell.

Kirkconnell, 24, recently came under fire after photos began to circulate online of her attending an antebellum plantation-themed college party in 2018. She has since apologized, saying in part, "I think that the first big step in all of this is white people stepping up and taking accountability. Things will never change if we don't all work together in working towards this racial progress and this unity that we want."

Despite the controversy surrounding Kirkconnell, Acho, 30, couldn't deny her chemistry with James, 29.

"Rachael is dealing with all of this racially tense controversy, so that would kind of obviously skew my decision as a Black man if I already knew about said controversy," he said when asked who he would pick if he were in James' shoes. "But what I think is so interesting is watching both of the love connections play out. I think Matt and Rachael have an incredible connection, just affection. Matt admitted that he's falling for Rachael first."

"And Michelle and Matt, they really vibe, and we saw it and continue to see it over the course of the season," he continued. "I can't speak for Matt. But I'm excited to watch it play out." Acho was called on to host the ATFR special after longtime host Chris Harrison announced last month that he was "stepping aside" from the ABC franchise following his widely criticized interview with former Bachelorette Rachel Lindsay. During their conversation on Extra, Harrison, 49, appeared to defend Kirkconnell and said people should have "a little grace, a little understanding, a little compassion" in the wake of the resurfaced photos.

The ensuing public reaction was swift, with many calling for Harrison to be fired. He has since issued public apologies.

And while Acho is looking forward to address the controversy head-on during the special, airing on Monday night, it's an opportunity he said he never saw coming.

"Absolutely not," he said when asked if he ever expected that he'd one day be hosting The Bachelor. "That is the craziest of stories that Uncomfortable Conversations with a Black Man, a book about racial reconciliation, would lead me to now hosting the most uncomfortable episode of one of the most-watched shows in our recent history. Mind-blowing."

As for whether or not Harrison should return to the franchise after this season concludes, Acho said he doesn't believe in "cancel culture," but thinks there are larger conversations still to be had. Earlier this month, Acho spoke to PEOPLE about the upcoming gig, calling it a "humbling opportunity."

"This is huge for me in the work for racial reconciliation," he said. "Because it shows that in the midst of turmoil, racial turmoil, across one of America's most watched shows over the last two decades, I'm seen as a thought generator."

The Bachelor: After the Final Rose special will air on Monday at 10 p.m. ET on ABC, immediately following the season finale of The Bachelor.