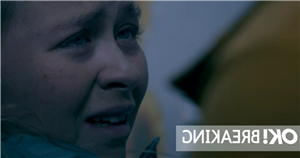 Emmerdale fans were left sobbing on Wednesday night as Liv Flaherty died after being crushed by a caravan during the ITV soap's terrifying storm week.

At the end of Tuesday's episode, Liv and husband Vinny Dingle were left lifeless after being crushed by the vehicle while making their way to The Woolpack to look after Paddy Kirk's daughter Eve.

During Wednesday's episode, Vinny was able to free himself from the wreckage but Liv was left trapped and unable to get out, as she tearfully said: "I can't feel my legs."

Liv's brother Aaron Dingle was quick to run to the scene as he attempted to free her but Paddy, who is a vet, warned them not to as it will cause more damage until the emergency services arrive.

After an agonising wait, the paramedics and fire department finally arrived as they gave Liv pain relief before they were seen giving a serious talk to Paddy.

Vinny and Aaron were quick to ask Paddy what was happening and why Liv wasn't being moved, to which he emotionally explained: "They can't because where it's hit, it's pinned her down…

"It means the caravan, it's hit her really hard… it's crushed her lower body."

Vinny was quick to start sobbing as he demanded they can't leave Liv trapped and had to get her out, with Paddy pointing out: "It's the only thing keeping her alive."

Asking if she'd be okay, Paddy replied: "I am so so sorry… there’s nothing they can do."

Vinny was left devastated as he argued: "She’s still alive though, they can’t just do nothing!" with Paddy insisting: "You haven't got long, you need to say goodbye!"

He then ran off, refusing to believe the news as a paramedic explained that Liv wasn't in any pain and they'd made her comfortable, pointing out they couldn't do anything to save her.

Aaron was first to say goodbye as Liv heartbreakingly asked him if she was going to be alright, to which he lied saying: "They're doing everything they can, yeah you’re going to be fine!"

He added: "I couldn't ask for a better little sister, I love you so much."

Vinny then came over to say goodbye as he told her about all the future travel plans they were going to do with their pet animals.

To which Liv said: "I'm so lucky to have you, I don't want to leave you" with Vinny replying: "Wherever you go next we'll be together again, I promise, we're soulmates."

Liv, who realised she was dying, then said: "I love you Vinny, I never knew anyone could make me so happy…" as she closed her eyes and died.

To which Vinny started sobbing as he held her in his arms, shouting her name, with the episode ending.

Viewers were left distraught over the scenes as they took to Twitter to share their thoughts over Liv, who has been on Emmerdale since 2016, dying.

One person said: "Why am I actually sobbing right now #Emmerdale."

Another follower wrote: "My chest hurts. This is gut wrenching #Emmerdale."

For all the latest cast updates and juicy Emmerdale spoilers, sign up to our daily OK! Newsletter . Emmerdale continues weekdays at 7:30pm on ITV.