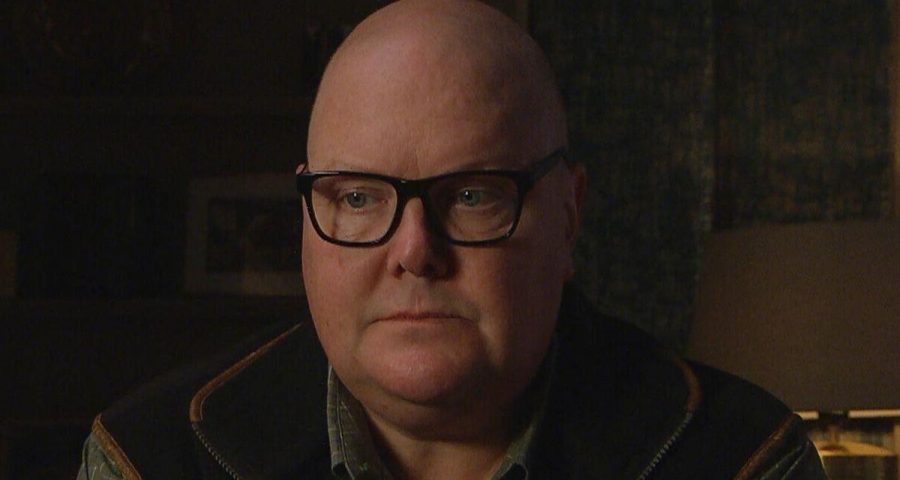 Emmerdale: Gabby Thomas turned down as she tries to kiss Nicky

Last year, it was revealed Chas (played by Lucy Pargeter) had been having an affair with Al (Michael Wildman) which left Paddy (Dominic Brunt) heartbroken. He recently sought the help of Vinny Dingle (Bradley Johnson) and the pair have struck up a close friendship, going for walks to clear their mind. However, fans were left concerned over Paddy’s mental state on Tuesday night and began to fear the worst.

Paddy walked in on Vinny smashing a wrench on the kitchen tap and said: “Hi, it’s about yesterday. I wasn’t thinking, me and my big mouth.”

Smiling, Vinny exclaimed: “We all get like that sometimes, apology accepted Paddy.”

Reiterating how sorry he was, Paddy said again: “And I am sorry, it won’t happen again.”

Wanting to move past their disagreement, Vinny probed: “Will you shut up, have a go if you want it might make you feel better?”

Paddy politely declined: “Oh no I’m not a violent person, what are you doing?”

Vinny explained: “I am trying to change the washer because the tap is leaking water and it won’t budge!”

Halfway through their conversation, Vinny’s phone rang and he answered cutting Paddy off and leaving him feeling alone once again.

As he turned to leave, Vinny shouted: “Paddy why don’t we meet later and go for a walk and have a chat?”

Pleased at the request, Paddy smiled: “Yeah I’d really like that! I look forward to it.”

Later in the pub, Vinny was sat with Jacob Gallagher (Joe-Warren Plant) when Paddy walked in looking downcast.

As Jacob left for the toilet, Vinny informed Paddy: “I’ve invited Jacob with us, on the walk, he is feeling a bit down.”

However, Paddy broke some bad news: “Oh right actually I have to work now so, sorry about that can’t be helped.”

Wanting to make sure they were okay, Vinny asked: “Another time though yeah?” to which Paddy enthusiastically replied: “Oh yeah absolutely.”

Walking up to the bar, Marlon Dingle (Mark Charnock) asked: “You not working?” however Paddy bluntly replied: “Nope.”

He walked off around the back of the bar and angrily kicked over the boxes of crisps, before stacking them up again and walking out.

Viewers of the show have begun to worry about Paddy and his well-being, with many taking to their Twitter accounts to express their concern.

@KaiCEN00 added: “I feel like Paddy is really struggling with his split from Chas and it absolutely breaks my heart.”

@CorrieFanDOM88 said: “Oh Paddy… I really hope he catches a break soon otherwise I fear he’s going to go down a dark path.”

Karen Jessups theorised: “Hear me out, Paddy is going to fall into a depression and it will be up to Chas to pull him back and they reunite… PLEASE.”

Maggie Smith expressed: “Paddy has been and always will be my favourite. Really hoping he doesn’t fall into a bad mental place.” (sic)