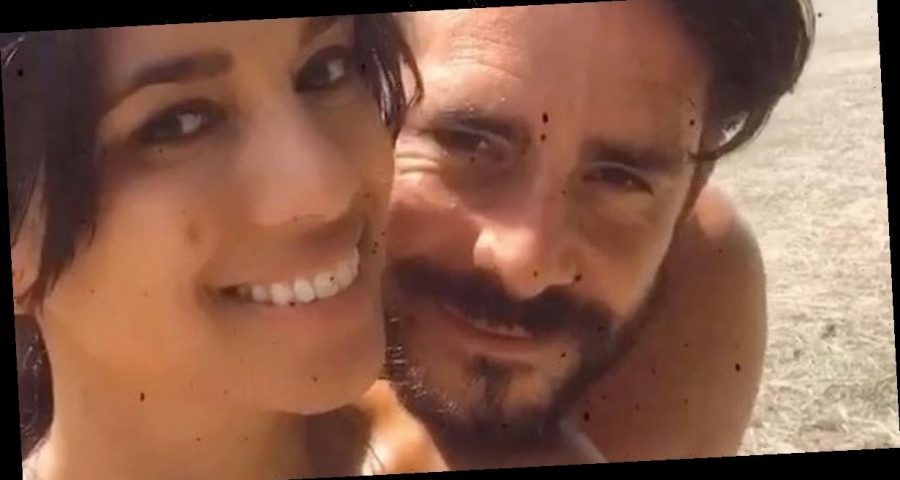 Emmerdale beauty Fiona Wade has faced her fair share of heartache and strife on the soap in recent months, but offscreen, the soap star has reason to celebrate – it's her birthday.

The actress turns 42 on March 20, no doubt enjoying a quiet lockdown celebration at home with her actor husband Simon Cotton.

Having played Priya Sharma since 2011, Fiona's character has been through the wringer when it comes to relationships, having split from village bad boy Cain Dingle (Jeff Hordley) and embarked on an ill-fated fling with David Metcalfe (Matthew Wolfenden).

Most recently, her wedding plans with crooked businessman Al Chapman (Michael Wildman) went down the toilet when she realised he was cheating on her with Debbie Dingle (Charley Webb).

Thankfully, Fiona's romantic life off-set is a lot more drama-free, as she marks her two-year wedding anniversary with Simon this coming wintertime.

The sweethearts are a real-life Emmerdale love story, having fallen for one another backstage on the ITV soap opera.

To mark Fiona's birthday, Daily Star has taken a look back at her relationship with the actor, exploring their sentimental proposal and glittering winter wedding.

Playing Home Farm client Hugh Bryant, Simon first made an appearance on Emmerdale in August of 2017, appearing in a few episodes before a swift exit.

Simon had just one scene with Fiona on the soap, but it was enough to make a lasting impact for the soon-to-be sweethearts.

She later told OK! Magazine: "We had one scene together in Emmerdale and then my friend Dana suggested we all go out for dinner. It was a bit of serendipity and the rest was history!"

Rumours were swirling of a romance brewing between the pair, but Fiona didn't confirm their relationship until July 2018, making things public on Instagram.

Posting a photo of herself and her leading man, Fiona and Simon could be seen locked in an embrace, gazing into each other's eyes against the sunset.

Months beforehand, Fiona had hinted she had found someone special in an interview with The Express, saying: “I'm with someone right now. He's an actor and writer based in London.

"It's fairly new, we've been together since last year and he's a very wonderful guy, but I've kept it quiet. I just wanted time to get to know him – he's very special."

Less than a year later they were engaged, with Simon getting on bended knee in Fiona's family home in Hertfordshire.

Sharing the news with fans, Fiona wrote: "Two days ago this beautiful man asked me to be his wife. There has never been an easier answer to a question…. Yes! Feel so incredibly blessed.

Their Emmerdale co-stars rallied around the couple, sending messages of love and support, delighted they had both met their match behind-the-scenes on the long-running soap opera.

Fiona later revealed Simon's decision to propose at her family home was all the more special, as it reminded her of her late father who tragically passed away after a battle with oesophageal cancer.

“I was in floods of tears. It's the home I grew up in and I still live there with my mum when I'm not filming. It's the most special place in the world to me,” she told OK!

Simon added: “‘In the Bahá'í religion it's important to ask permission from both parents.

“I asked her mum, who was very excited and I also went to visit her dad's grave to ask him, too.”

Before their wedding, the couple decided against moving in together, adhering to the beliefs of Fiona's Bahá'í religion in the run-up to the ceremony.

Instead, they prepared to make a home together once they became man and wife, giving them more to look forward to after the wedding day.

"It's exciting because everyone says you have a lull after the wedding but we're going to be planning our life,” Fiona admitted.

"I have my family home in St Albans and my flat in Leeds. Simon had a place in Stoke Newington but he had to give it up as he was touring.”

The special day dawned in November 2019, with Fiona wearing an elegant strapless gown designed by Berta, which featured floral embroidery and diamond embellishments.

Saying their vows in a Bahá'í Faith ceremony, the couple married at the idyllic rural venue of Euridge Manor and Orangery in The Cotswolds.

Fiona had viewed the grounds in February, and instantly knew it was where she wanted to get married, having fallen for the estate's rose gardens and Georgian-inspired architecture.

Her mum Tessie walked Fiona down the aisle, with the pair remembering her late father Colin on the emotional day.

After the ceremony, the couple moved to a banquet hall that had been strewn with roses and candles, where they dined on roast beef with a goat's cheese entree.

Many of Fiona's Emmerdale co-stars were in attendance, with the likes of Michelle Hardwick and Chris Bisson posing for snaps at the party.

Their first dance was to a cover of Can't Help Falling In Love by Kina Grannis, and the bride and groom ended the evening outside, watching the sky light up with fireworks.

The next few weeks were spent holidaying in St Lucia, lapping up the sunshine at Sandals Grande St Lucian Luxury Resort.

Since their wedding, the sweethearts have moved in together, keeping each other company over three lockdowns and enjoying life as newlyweds.

Proving they are happier than ever, Fiona shared a sweet tribute to her leading man on Valentine's Day of this year, sharing snapshots from their time together.

She said: “Happy Valentines light of my life. Thank you for being the best husband & best friend I could ever wish for.. Oh And Thank you for letting me take ridiculous videos of us which I know you hate.”

Just as smitten, Simon penned his own tribute to Fiona weeks later, showing his gratitude for his accomplished bride.

He wrote: “Not only is she [fire emoji] enough to fire up even the most grey of lockdown February mornings, but she keeps me strong, she keeps me positive and she makes me indescribably happy. I'm a lucky man indeed."

And, the lovebirds have made no secret of their plans to start a family, looking forward to raising children together if the opportunity presents itself.

“We’re very excited for that part of our life to come and we hope that happens, so watch this space," Fiona added to OK!