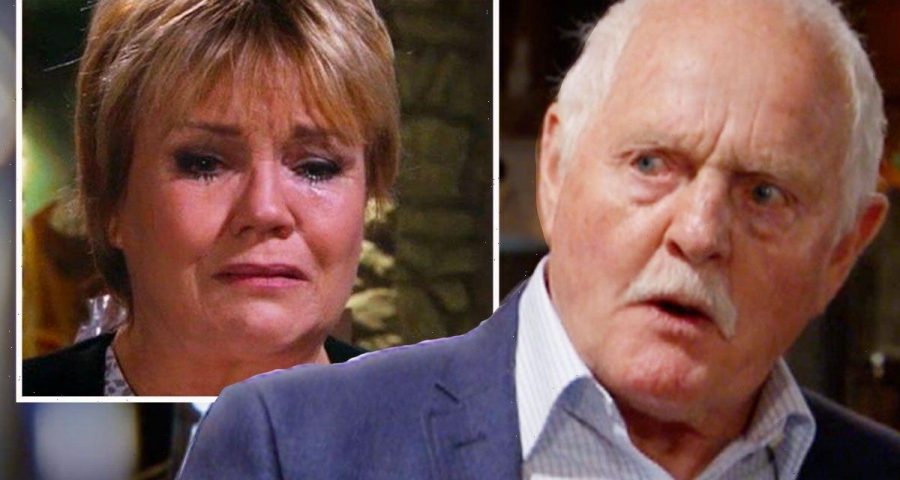 Eric (played by Chris Chittell) was trying to help his son, David Metcalfe (Matthew Wolfenden), with the village shop finances as Friday’s episode of Emmerdale got underway, having discovered his son needed money to save his business. Unfortunately, the ITV soap veteran discovered there was nothing he could do to rectify the damage and suggested it would be worth selling up rather than trying to salvage the shop. However, David didn’t take this too well and as Eric pondered on other ways to help his son, this led him to have a conversation with Brenda (Lesley Dunlop) about their future.

The conversation with David ended on a sour note for Eric as he told his son he should join him in working at the B&B once he had sold the shop.

This would mean the soap stalwart could train him up to take on the business when he was ready to retire from his duties.

David took this as a kick in the teeth as he didn’t want to lose his shop, telling Eric he would have felt the same if he was in his situation.

With the discussion turning to retirement, a hint was dropped Eric could be ready to step down and this is why he wanted his son to take on more responsibility.

However, if he was going to retire, he needed to make sure he wasn’t doing this alone and that his partner was also on the same page.

After telling Brenda about David’s predicament, Eric asked his other half: “Have you ever thought about retirement?”

The café owner also dropped a clue she was ready to step back as she replied: “We’ve talked about this. I don’t hate my work but I don’t want to be on my feet forever.”

“So, when?” Eric asked her, seeming more eager than ever to stop working and enjoy the pleasures of life without any stress.

“I don’t know. I put so much into the business, I haven’t exactly been stuffing my pension pot,” Brenda said, seemingly on a different page.

“And I did want some money to give Cathy and Heath and I’m hardly even there yet,” she added, but what if Eric could make up this money?

Don’t want to be on my feet forever

If the stalwart were able to convince his son to sell the shop, he could hand over the B&B to David full-time so he could step back.

He would agree to the terms if David were to take charge and benefit from the B&B, he would give the money from the sale of the shop to his father.

This way, Eric would be able to help Brenda gain the extra funds she needed to ensure her stepchildren had some money from her.

With the rest of the money sitting in the bank for them to spend, Eric could propose to his other half they leave the village for good.

Having been at the centre of some hard-hitting storylines over the years, the characters would be ready for their moment to ride off into the horizon.

Successfully buying a property abroad, they could tell their loved ones they are going to leave and won’t be coming back.

Although they still have links to Dales in the form of their children, they could tell them they could visit whenever they liked.

This way, the pair would still be referenced on the show when David or Bob Hope’s (Tony Audenshaw) children were going out to see them.

Having been on the programme for almost 40 years, it would be a big decision for the character of Eric to make as he would leave his entire life behind him.

The double exit could come later this year as the show prepares to celebrate its 50th anniversary in October.

The actor who plays Eric, Chris, has spoken out about a possible exit before and has given the reason he would leave.

Chris explained: “I can see Pollard heading downhill in five or 10 years’ time. But you’re only ever as good as your last storyline.

“I’ve always said that when the writers stop writing for Pollard, I’d leave.

“And although I’d hate it, I’d just shake everyone’s hand and say thank you very much, as the journey has been wonderful.

“But when it does happen, I’ll just have to get the fishing rod out,” he added, discussing his own retirement plans with Inside Soap Magazine.

Talking about why he thinks Emmerdale has lasted on-screen for as long as it has, Chris said: “We’ve always had a good cast, always.

“We churn out stories, and it’s a great team effort.

“It’s wonderful to go on set the day after winning an award and see everyone congratulating each other. That’s tremendous.

“But we know and have always known that Emmerdale produces good stuff. The words and performances are always there.”

Will viewers be bidding farewell to the soap icon and Brenda later this year?