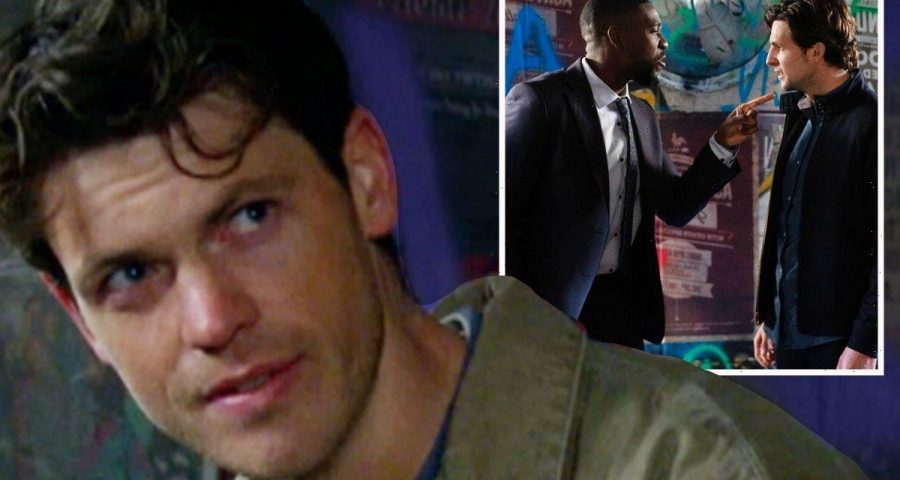 Marcus (played by Darcy Grey) has been playing the perfect boyfriend to Ethan Anderson (Emile John) in recent months on Emmerdale, despite the fact his late father, Pierce Harris (Jonathan Wrather) was a killer. The residents of the ITV soap seem to have moved past the young man’s parentage and have started to see him as his own person rather, with the newcomer starting to develop a small circle of friends. However, what they might not realise is he actually knows Jordan (Jack Parr) from years ago, the same man who attacked his partner in the end of Thursday night’s episodes.

As the latest instalment of the village-based drama began, Ethan decided he was going to stop representing Jordan as his client had been seen intimidating Billy Fletcher (Jay Kontzle) earlier in the week.

With the lawyer facing a backlash anyway for working on behalf of a racist attacker, he called Jordan into his office to give him the update.

The villainous character brought along his wife to meet his lawyer, hoping he would be able to keep Ethan on his side ahead of the court case.

Unfortunately, the air turned red when the heartthrob of the village told his client the news and Jordan was far from impressed.

His true colours began to surface as he showed his other half he was a racist bully by making derogatory comments toward Ethan.

In his outburst, Jordan said the only reason he wanted Ethan to represent him was because he was black and the courts would think Billy was lying if they saw the supposed attacker being friendly towards a black man.

Not willing to stand for the abuse, the lawyer demanded his former client leave his office and Jordan made his exit from the room.

On his way back to the car, Ethan called his boyfriend to tell him all about the news and he said they should have a takeaway to celebrate.

What he didn’t realise was he was being followed by Jordan and the two men had an extremely heated conversation about race.

By the time the conversation came to an end, Ethan was on the floor and he was being beaten to within an inch of his life.

Why would anyone do this?

Billy intervened as he had learnt from Marcus earlier in the office where Ethan could be as he hadn’t turned up to meet him after work.

Believing something wasn’t quite right, Billy arrived at the location to find Jordan standing over Ethan’s bloodied body.

Having called the police, Billy tried to keep his attacker talking as the authorities soon turned up to arrest the villain.

Just as he was being taken away, Marcus came running to the scene in enough time to see his boyfriend being put on a stretcher.

“Marcus, he’s unconscious. He’s taken a few punches but I think I got here in time,” Billy explained to the lawyer’s partner.

“How did you know?” Marcus asked his neighbour, to which Billy replied: “I had a feeling Jordan wasn’t done. Thank God you knew where he was.”

“Is that him?” the newcomer asked, with Jordan looking back to catch a glance of his victim’s boyfriend but there was something not quite right about the set-up.

Marcus looked extremely nervous after locking eyes with Jordan and this seemed to suggest the pair could know each other. All he had to say is: “Why would anyone do this?”

What could transpire in the next few weeks is the two men went to school together and Jordan bullied Marcus for being gay.

He could have been as vile and nasty to Ethan’s boyfriend as he was to the lawyer himself, leaving Marcus with a lot of trauma.

However, wanting to see Jordan in prison after being arrested for attacking Ethan, Marcus could finally have his say about the past.

The newcomer could explain how the villain almost ruined his life and made it such a misery but Ethan has managed to bring some light back.

Using this to his advantage, Jordan could tell Marcus if he were to take to the stand and state what a brilliant person his bully was, he would instruct his group to leave Ethan and Billy alone.

Although he had even intention of leaving with the balls in his court, Marcus could seriously consider Jordan’s offer.

If he were to give the villain a gleaming character reference and help him to walk free, will Ethan ever forgive him or will this be the end of their relationship?

The actor who plays Ethan, Emile, has spoken out on the recent storyline and the importance of highlighting the matter of racism.

Emile explained: “I think Emmerdale has been really brave and also they’re showing it in its most huge form.

“Usually when we see series or dramas talk on the topic of racism, it’s a more covert racism and it’s not really too harsh.

“But here we see someone who is actually very overt with it. His [Jordan’s] language is disgusting,” the actor told Express.co.uk and other media.

But will Jordan ever leave Ethan alone or is it the beginning of a much deadlier storyline?