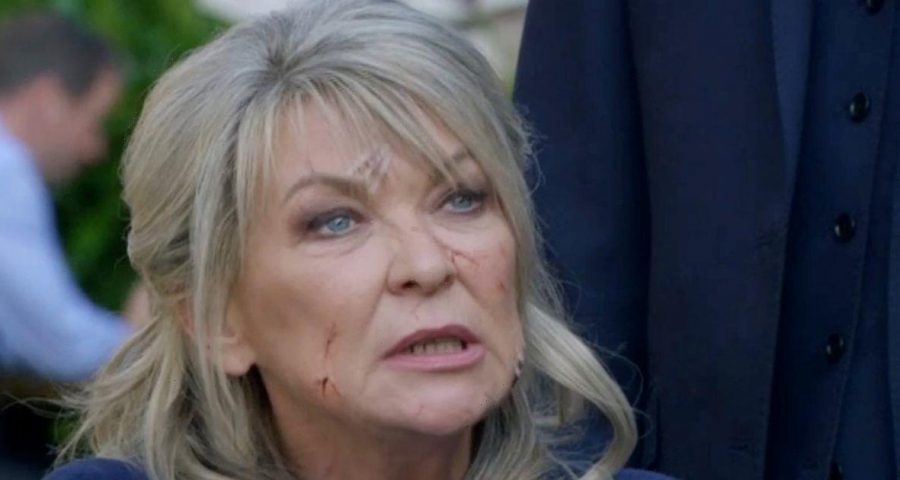 Emmerdale star Claire King initially thought she was getting killed off by soap bosses when she read her latest script, fearing Kim Tate's funeral was on the horizon.

The actress, 58, who first appeared in the Dales in the late eighties, started to speculate when scriptwriters revealed the Battle for Home Farm storyline was inspired by acclaimed HBO drama Succession.

Starring Brian Cox and Jeremy Strong, the series revolves around the Logan family, who are fighting for control of their empire as patriarch Logan Roy battles ill health.

The last few months have seen an anonymous person poisoning Kim in secret, dropping Diazepam into her liquor and leaving her feeling immensely vulnerable and confused.

Emmerdale spoilers have revealed upcoming scenes will follow Jamie Tate as he's called to Home Farm by medics, only to find his mother inside, laying on the floor next to a body bag.

Recalling her first glimpse at the script, Claire was concerned the poison storyline would follow in Succession's footsteps – potentially leading to the death of matriarch Kim.

"I watched Succession and I thought they were a really messed up family, more than the Tates, basically – that's the politest way I can put it," she told Daily Star.

"I enjoyed Succession but there again, like the Tates, they are pretty messed up in the head. And then, when they said, 'It's going to be like a Succession storyline,' I thought, ‘Oh great. But if that's Succession, does that mean I'm going?'

"Hence there was the retirement and all the rest of it."

Mirroring the drama, the Emmerdale cast parodied the iconic Succession cast line-up for its latest advertisement, which sees the family gathered around a table.

Claire was impressed by the results, as she added: "I think our picture was actually better than the original Succession picture. Just saying!

"It was very clever because we couldn't all be in the same room at the same time, so we did it all individually and it was photoshopped together."

The soap legend also opened up on the chilling body bag storyline to come, which leaves Kim's fate hanging in the balance.

Describing the lead up to the drama, Claire explained Kim's son Jamie does some detective work and discovers Will Taylor has a secret stash of Diazepam.

Convinced he's responsible for her drugging, he sets up a trap using Kim's elaborate hidden camera system, which has been affectionately dubbed "Kim Cam".

"Jamie then says, ‘right we'll set a trap to try and trick Will into it, we'll catch him red handed'," she said.

"So they use Kim cam. Everyone's loving Kim cam. They set up the horses head in front of the drinks trolly and he sets up this ruse that she'll actually try and attract Will to come around.

"She makes the excuse to say her oven door was broken by Noah when he was trying to fix it. She's all dressed up to the nines to try and seduce him and Jamie is watching everything from the hop office from Kim Cam.

"The idea is to get Will to poison Kim's drink, and then get him arrested, and the job is sorted.

"Jamie gets a call after Dawn's interrupted him at the office, and everything is going well as far as Jamie's concerned. The next thing, Jamie gets is a call from the police saying that his mother's collapsed she's on the floor.

"He gets get back to Home Farm and sees Will being arrested. And Kim's flat out. And that's when he's told that she's actually dead."

Is it curtains for Emmerdale's favourite villain Kim Tate?

Emmerdale airs on weekdays at 7pm on ITV, with an extra helping on Thursdays at 8pm.