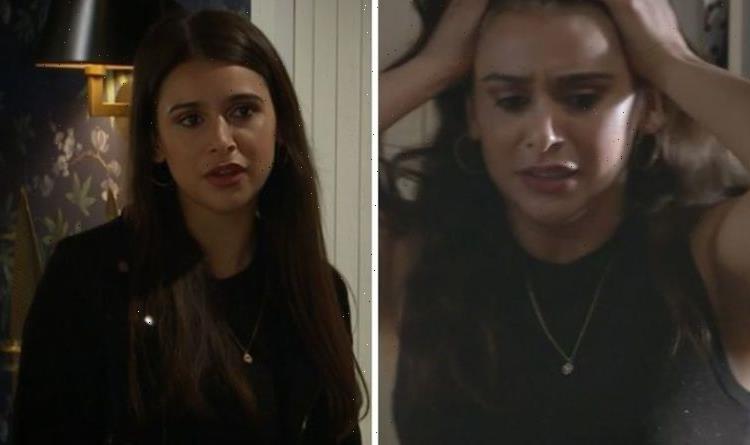 In recent weeks, Emmerdale fans have seen Meena Jutla’s (played by Paige Sandhu) manipulative behaviour get even worse. She feared she was drifting apart from her boyfriend David Metcalfe (Matthew Wolfenden) as he was constantly preoccupied with his son, Jacob (Joe-Warren Plant). In a bid to drive a wedge between the father and son, Meena framed Jacob by stealing a Pride collection tin from the shop. However, as Tuesday night’s episode came to a close, Leanna Cavanagh (Mimi Slinger) discovered the collection tin in Meena’s bag, leading ITV viewers to believe that this could expose Meena as a killer.

The hour-long episode was full of twists and turns as Leanna’s 18th birthday party approached.

At the beginning of the programme, Meena decided to have a heart-to-heart with Jacob as she tried to persuade him to go travelling with Leanna.

Despite initially agreeing to go travelling with his ex-girlfriend, Jacob later changed his mind and told her he didn’t want to go.

Meanwhile, Meena thought her mission to get rid of Jacob was all going to plan, but the villain was soon stopped in her tracks when she realised the bag she had hidden with the money box had gone missing.

In a panic, Meena rushed to confront her sister Manpreet (Rebecca Sarker) to see if she had taken the rucksack with the tin in it.

“Did you take a rucksack from under my bed?” Meena asked her frantically.

“No,” her sister hit back. “I took my rucksack, like everything else you have taken from my room.”

“Where is it? I left something in it,” Meena quizzed as Manpreet replied: “I gave it to Leanna. She’s going travelling, you’re not.”

“You could have asked,” Meena shouted. “It’s important, I need it back.”

Manpreet went on to explain that she gave the rucksack to Leanna’s dad Liam (Jonny McPherson).

Hellbent on getting the rucksack back before being found out, Meena rushed to see Leyla (Roxy Shahidi) who took her to Liam.

However, things went from bad to worse for Meena, when Liam told her the rucksack was in Leanna’s bedroom – which is where she was getting ready for the party.

“How did you get in here?” Leanna asked Meena as she stormed into her bedroom.

Meena told the teenager she had left the door on the latch as Meena asked her: “Why are you here, Meena?”

“It’s all fine,” she replied. “I’ll be out of your hair in just a sec. But first, I think you have something of mine.”

As she explained to Leanna she had her rucksack, Leanna was about to hand it back to her when the Pride collection box fell on the floor.

“Why was it in your rucksack?” Leanna quizzed. “Oh my gosh, it wasn’t Jacob. It was you.”

Viewers couldn’t believe that Meena’s evil ways finally got found out by Leanna.

Many took to social media to share their shock, with one tweeting: “Oh my god! Leanna’s found the pride money collection tin that Meena stole in THAT rucksack.”

“Why leave it on a total cliffhanger seriously?” one frustrated viewer penned.

A third said: “Meena is a bit thick why would she keep the collection box? Surely any halfwit thief would take the money out and dispose of the box?”

Meena’s evil ways have finally been rumbled, but what will her next move be and who could she end up killing as a result?

This week’s Emmerdale is available to watch on the ITV Hub.