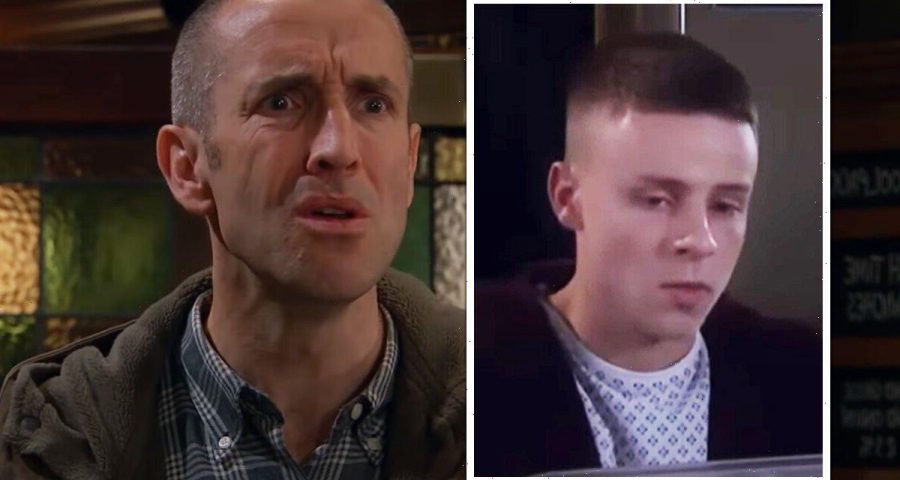 Emmerdale: Cathy and Arthur chat in the cafe

Sam Dingle (played by James Hooton) miraculously survived after he was impaled by a metal spike as he tried to avoid a stampede of cows during Emmerdale’s 50th anniversary week. The loveable character has been recovering from the horrific injury but his health takes a turn for the worse on Thursday’s instalment of the soap when his son Samson Dingle (Sam Hall) says he wants nothing to do with him.

In scenes yet to air on Emmerdale, Samson gets scolded for calling social services about Amelia Spencer’s (Daisy Campbell) parenting skills.

He and Amelia are the parents of baby Esther who has been taken out of the hospital to be raised by the teenagers.

Samson has not taken well to fatherhood and on Thursday’s double bill, his dad Sam is left horrified when he learns about the call to social services.

Gutted to find out what his son has done, Sam pours his heart out, rationalising the sacrifice he made to make up for his mother Alice Dingle’s (Ursula Holden-Gill) death.

Samson delivers a crushing blow to his dad, telling Sam he does not want to be anything like him.

It all becomes too much for a fragile Sam who collapses to the ground after his son’s cutting words.

Will Sam make a full recovery or is he too weak to pull through?

Sam actor James recently opened up to Express.co.uk and other media about his character’s health struggles.

Reflecting on being impaled, James said: “You never know what the show is going to throw at you.

“I was told this was going to happen and you don’t know what the outcome is going to be of the story.

“You don’t know and the viewers don’t know whether Sam lives or dies.”

Many Emmerdale fans assumed Sam had died following the accident, so they were relieved to see that was not the case in the following episode when he was being cared for by doctors.

He explained: “We spent pretty much the whole day on one scene which is unheard of in soap territory to spend so much time preparing and shooting just a single scene.

“They were good between takes as I had something to support my knee as I was pretty much in that position of being slumped over the spike for about two to three hours.”

His character still has a long way to go with his recovery and the stress Samson is causing him could have a devastating impact.

James said: “There’s a great juxtaposition between the Dingles, particularly Sam and Samson.

“[Samson] is just the opposite [of Sam] as he doesn’t want this baby or the responsibility.”

“It’s been a joy to see him flourish as an actor,” James added as Samson’s personality has changed dramatically since his baby was born.

Will Sam be forced to choose between his son and his granddaughter in upcoming episodes?

Emmerdale airs on weeknights at 7.30pm on ITV.