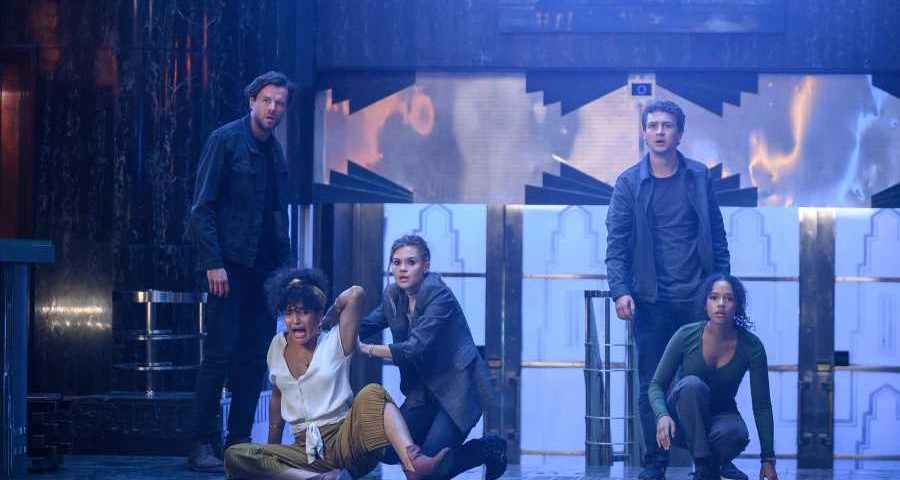 The company behind the so-called “escape rooms” of the Escape Room movies is called Minos. In the Cretan of myth, King Minos fed children to his minotaur as a matter of rite. So it’s no wonder that a company taking his name would be heavy on sacrifice, low on ethics, and altogether suspicious; it’s no wonder these games aren’t much fun.

Escape Room: Tournament of Champions is exactly what its title says it is: A gathering of escape room champions, only two of whom — Zoey (Taylor Russell) and Ben (Logan Miller) — appeared in the last installment, from 2019. The others, a consortium of traumatized people who, unlike Ben and Zoey, thought they’d escaped this thing, were all respective winners in their own death-trap tournaments, making them all, like our central pair, unhappy survivors of a game they never wanted to play to begin with. What sets Ben and Zoey — but especially Zoey — apart is that they were drawn here to blow the whistle on this gnarly operation, hoping to peel back the curtain, get evidence, prove to the rest of the world that this corporate nightmare exists. That’s not to say that they wanted to be trapped in the game, again. But without that painful twist, there’d be no sequel.

The Escape Room movies are at minimum fun to watch because they take an innocent pastime and push it to its most horrific, life-and-death conclusions. Some people — everyday, overly competitive, fervent types — already treat games like these as if they were matters of life and death (or, at least, that’s what it can feel like to play on their teams.) So these movies say: OK, let’s go with it. Cue the acid rain. Cue the quicksand. You want a countdown clock the end of which spells your own uncertain doom? Sign here. The movies are fool-proof suspense vehicles. Every challenge bears with it the promise of someone dying — simply by brunt of not being clever enough to live.

Unfair? Surely. Rude? Absolutely. Worthy of a sequel? Well. Tournament of Champions bears the unmistakable whiff of a younger sibling trying to outdo its elder without either falling prey to total repetition nor breaking the recognizable mold that got asses in seats to begin with. It’s a comforting variation on a disturbing conceit; insofar as that’s all it has to promise us, it basically delivers.

The cast is, for the most part, different. Joining Russell and Miller are Indya Moore, Thomas Cocquerel, Carlito Olivero, and Holland Roden, in a series of challenges that range from electrified subway cars to a mockup of New York City streets that pour with acid rain. Yes, it’s all ridiculous, with the contestants able to remember at the drop of a dime which materials are electrical conductors, which can withstand certain acids, what the odd meanings of the game’s silly riddles are — all of it with a, “Wait! I’ve got it!” sensibility that both makes it silly and skates past unnecessary hangups. Ultimately, it’s all the difference between life and death, and since someone’s going to die anyway — that’s just sort of the point of the game — the movie doesn’t go out of its way to complicate the inevitable with too much human reality.

Russell’s return is especially welcome; her soft-spoken confidence has stood out in her film career thus far for its unusual sense of candor. She is, on the one hand, an unlikely heroine for being less cavalier than our usual heroes. On the other hand, that’s exactly what makes her such an intriguing screen presence. What ultimately gives Tournament of Champions whatever power it has — which, for some, will be limited — is the pure and simple, unavoidable fact that most of its characters, almost all of them young people, will have to die. Over, and over, and over. More than once, watching these movies, I was reminded of the early aughts franchise Final Destination, which, however goofy it got, is lower on gameplay, higher on the undistilled existential terror of its era, but similar to the Escape Room movies in its sense of the inevitable being inflicted prematurely on people way too young to die so ruthlessly. No, Tournament of Champions doesn’t always add up. The rules, such as they are, keep getting broken; the ease with which these characters (proven champions, sure, but still…) rush through the work of finding the clues, figuring things out, and escaping (or not) — all of it would be plainly and unforgivably wack but for the fact that the premise more or less steamrolls through these distractions with the force of a foregone conclusion.

Because in this scene, someone’s got to die. In the next, it’ll have to be someone else. The movie picks its characters off one by one, with a ridiculous set of joyless contraptions, a glee that in some ways has to match whoever’s watching calamities play out from the safety of a control room that we never see. But someone’s got to be hitting the switch the ramps things up for the hell of it, cueing the quicksands, the electric currents, the emotional torture. As a thriller, Tournament of Champions has its limits. Its ambitions toward some larger sense of conspiracy are simple, rote and also, thankfully, not overplayed, save for the ending. As a pure dilemma-fest, the movie basically works, resetting the clock scene by scene, making the joy of survival deliberately short-lived. The suspense works. Watching these people figure things out, just in the nick of time — except in the cases of the people who run out of time — doesn’t really get old, even if the movie somehow gets a little old. It’s not a great movie. But unlike a good many others, it knows what it is.