Jon Snow, who? Kit Harington’s Dane Whitman wants to know why the Eternals didn’t help fight Thanos in the final trailer before the release of ‘Eternals.’

“Why didn’t you guys help fight Thanos? Or any war or all the other terrible things throughout history?” Kit Harington’s Dane Whitman asks Sersi, played by Gemma Chan, in the final Eternals trailer. She replies, “We were instructed not to interfere with any human conflicts unless Deviants are involved.” Dane hits Sersi with this important question, “By who?”

The Eternals must deal with the fallout out of The Blip when the film begins. “Five years ago, Thanos erased half of the population of the universe. But the people of this planet brought everyone back with the snap of a finger,” Ajak (Salma Hayek) says to Ikaris. “The sudden return of the population provided the necessary energy for the emergence to begin.” 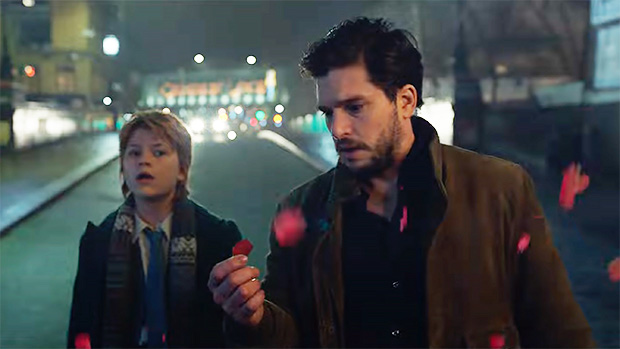 They only have 7 days until it’s too late. Ikaris knows he and Ajak need to find the other Eternals, including Thena (Angelina Jolie), Druig (Barry Keoughan), Sprite (Lia McHugh), Phastos (Brian Tyree Henry), Kingo (Kumail Nanjiani), and more. In addition to saving the world, there’s also romantic drama in Eternals.

The film centers around the relationship between Ikaris and Sersi, who have a romantic history, according to EW. When the movie begins, they have drifted apart. She’s now dating Dane. This will make for an “uncomfortable” love triangle.

Eternals is a reunion for Kit and Richard Madden, who plays Ikaris. They notably played brothers (okay, they were actually cousins) Robb Stark and Jon Snow on Game of Thrones.

Dane Whitman isn’t just a typical, ordinary guy. The character is also known as the Black Knight in the Marvel Comics. The Black Knight is an expert horseman and swordsman. Sounds kind of like Jon Snow, huh?

Kit actually didn’t know Dane’s significance within the Marvel universe. He had to Google the character after not being able to see the Eternals script! 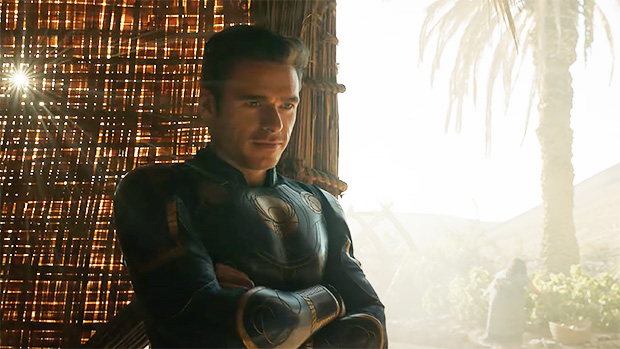 “This is, you know, a hell of a way to kind of work out who you’re playing,” Kit said on The Tonight Show with Jimmy Fallon. “I Googled him. He’s a character called Dane Whitman, and I realized he has a sword and rides a horse. And I was like, ‘I know this guy. I’ve been this guy.’ But actually, he’s quite different, so it’s exciting.” Eternals will hit theaters on November 5.