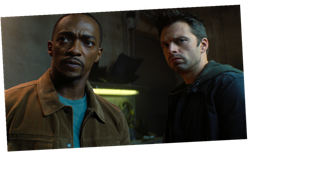 If the last year of living in a pandemic has been like a real-world version of the Blip — the five years in which half the MCU’s population was snapped out of existence — then one of the many minor causalities was Marvel Studios’ meticulously mapped out plan for its fourth Phase, with The Falcon and The Winter Soldier left feeling the effects of a world undone.

When Kevin Feige first announced at Comic-Con 2019 that Marvel’s cinematic universe would be expanding into streaming series, the Anthony Mackie and Sebastian Stan starrer was set to be the studio’s first foray into television. Even for the biggest franchise in the world, TV was uncharted waters, which left at least half of the titular duo feeling some kind of way.

“The last thing you want is to be the lead of the first Marvel project that sucks,” Mackie tells ET. “Whoever that is, your career’s over. You’re done. You’re doing TV commercials for the rest of your career. I don’t want to be the guy selling potted meat in France because I destroyed Marvel. So, I was very scared. Because I didn’t think it would translate to television.”

Then the arrival of COVID-19 shut down the world, including production on Falcon and the Winter Soldier. The series’ premiere date was delayed — along with the rest of Marvel’s slate — but as the world began to open up, the studio’s would-be sophomore outing, WandaVision, managed to be completed first, becoming Marvel’s inaugural streaming series and the first MCU project released in over a year.

Falcon and the Winter Soldier would no longer be first out the gate, but the team faced a new pressure: Following the most popular show in the world. “Listen, it’s a nail-biter,” admits series director Kari Skogland. “I hope the fans embrace us the way they embraced WandaVision. We’re very different shows. Our stories are all unique to themselves, much like the movies. So, I just hope we’ve served the fans as beautifully as WandaVision did.”

The idea to give Mackie’s Falcon (aka Air Force vet Sam Wilson) and Stan’s Winter Soldier (the un-brainwashed assassin Bucky Barnes) their own spinoff was inspired by ten seconds of screen time in Captain America: Civil War: The duo bickering over leg space in the car while Captain America handled his superhero business. Feige’s conceit was to take the two and plop them into their own odd-couple adventure.

“Everybody kind of knows what they’re showing up to do with a buddy two-hander, right?” says head writer Malcolm Spellman. Marvel producers Nate Moore and Zoie Nagelhout presented different “story arenas” to him and a designated “menu” of characters he could choose from “for villains and stuff.” “And then you are completely free to vibe out with them and take it in different directions.”

Spellman and his writers room reached into Marvel’s toy box and added Emily VanCamp’s one-time S.H.I.E.L.D. agent Sharon Carter as an ally and Daniel Brühl’s Zemo as a bad guy, among a cast of new characters. They referenced buddy flicks like 48 Hours and Lethal Weapon, while diving deeper than ever into MCU mythology to plot out what was to become of the “heroes of tomorrow” following the events of Avengers: Endgame. With Skogland onboard to helm all six episodes, the crew set out to address any concern of translating the scope of the MCU to a small screen.

“We started from the get-go saying we’re making a movie. It’s a six-hour movie, but that’s what we’re doing,” Skogland explains. “That was in part led by [Feige] who said, ‘I know how to make movies, so let’s just do that.'” While still ensuring the show hit the same high bar for spectacle as the movies, the team found the extra real estate afforded with a series let them explore the characters in ways the movies never could. “I look at the feature films as being a snack, and the series are the meal,” she says. “And we were very trusting of each other that we were going to push the envelope at every juncture and come from a very authentic place.”

If WandaVision was an exploration of grief told through an alternate reality of classic sitcoms, then Falcon and the Winter Soldier has a lot on its mind amid the buddy hijinks and globe-trotting action: Identity, race, nationalism, the shifting politics of global alliances and tensions, mental health and what it means to be a hero today.

For Mackie, it’s also a show about redemption. “When you look at these two characters and get their backstory and what’s going on with them, it’s really them trying to redeem themselves for failures of times before,” he explains. “Everyone has something that they want to make up for. Everyone has something that they’re trying to get back to. Redemption in this series is very important to these characters.”

“How they perceive themselves,” teases Spellman, “and how the world perceives them in the beginning of the series will be completely different by the end.”

They’re not really friends at the top, even though they might need each other.

For Sam, the story begins where it left off in Endgame, as he contends with the fact that Steve Rogers (Chris Evans) bestowed unto him Captain America’s star-spangled shield and mantle. In that movie, Sam said the shield felt “like someone else’s.”

“Sam is the reason I fought so hard to try and get on to this project,” Spellman says. (The series marks the first time the character has been written by a Black writer.) “For me as a Black man, the idea of a Black man taking on that mantle or turning it down was hugely important and hugely relevant to these times. That symbol — the stars and stripes — means something totally different in Sam’s hand than Steve’s, and we knew we needed him to have strong opinions that made him feel like he should not be carrying it.”

Or as Mackie puts it, “If you look at just the overall scope of the history of not even just being a Black man [but] a Black person in America, the idea of being a Captain America holds a certain weight. As the kids say nowadays, it just don’t hit right.”

For Bucky, his story began back in 2011’s Captain America: The First Avenger, when he enlisted in the Army only to meet his apparent death on a mission with Cap — then turn back up decades later as a hitman for Hydra. Having since been deprogrammed in Wakanda, Bucky has his own ledger full of red that he must come to terms with.

“With everything he’s done and the way he’s been manipulated and all the bodies he has behind him, everybody knew Bucky was finally going to have to confront that grief and that guilt and regret from his past,” Spellman says.

Though he may fighting with the good guys now, the series does not pull any punches with the ghosts of Bucky’s past. Spellman says it was unavoidable. “I mean, once you see what he did to the Stark family, you know, that happened already, my man,” he laughs. “There was no way we could hide from that. Bucky has done awful stuff. He has this excuse that it wasn’t him — he was being manipulated by Hydra — but one thing he says in the series is, ‘I remember every kill. And that means a part of me was there for every one of those.’ So, whether or not he’s irredeemable, that’s the question he’s asking himself.”

Together, Sam and Bucky must team up to stop a new threat from an old enemy, navigate new friends and foes (including Wyatt Russell’s John Walker and to-be-revealed characters played by Erin Kellyman and Danny Ramirez) and the hole left by the loss of both Captain America and Steve Rogers.

“Because he is their friend, his absence is always going to be a presence,” Skogland says. “The two of them have a common grief over that loss, but also a common loneliness. They have to figure out how to become friends — or if they want to become friends. Because they’re not really friends at the top, even though they might need each other.” 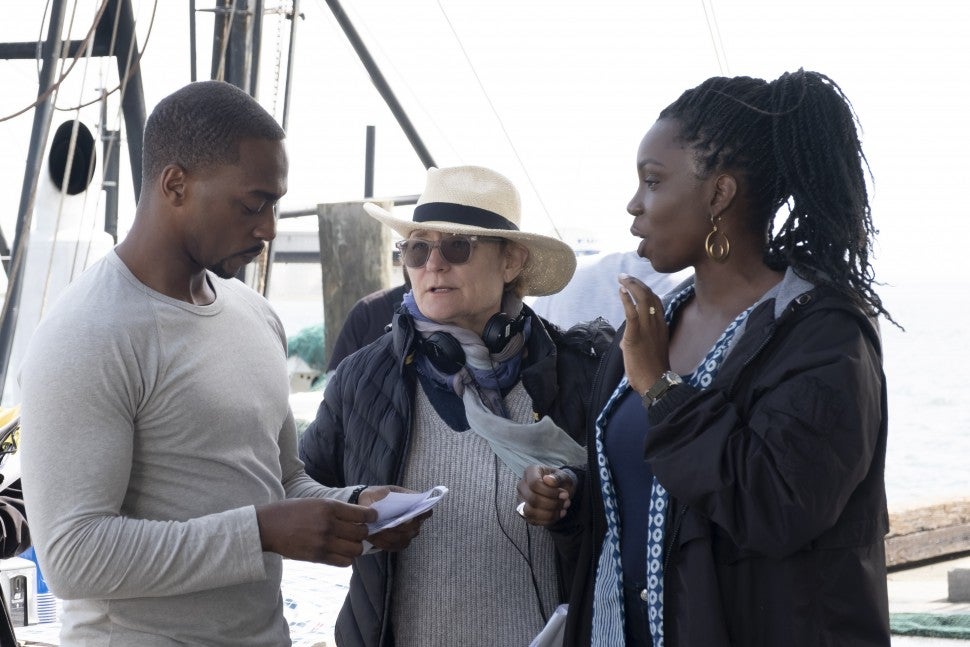 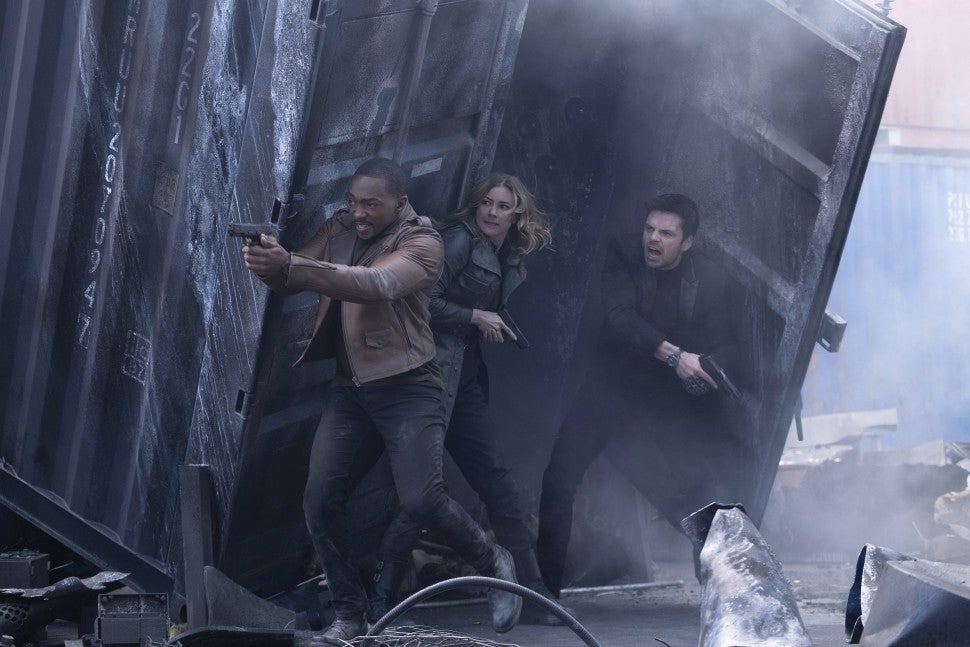 When The Falcon and the Winter Soldier premieres on Friday, it will be the second project released in Marvel’s Phase 4 and the sixth MCU outing for both Mackie and Stan. For Stan, his first leading man turn as Bucky happens to coincide with his 10-year anniversary playing the character, something he says is “bizarre to think about” but demurs, “It’s a blessing they’re still willing to call me, I guess.”

“My new agent is, uh, obviously here as well,” Stan deadpans. “The support is fantastic.”

“It’s funny that he says that,” Stan points out, “because in 2011 after the first Captain America came out, about a month later I had a call from my business manager telling me I had a month left to figure out how I was going to pay my rent. So, perception is always interesting, isn’t it? Nobody ever knows what the f**k is really happening.” Now, though? “I’ll get your dinner, Anthony,” he laughs. “Don’t you worry.”

The Falcon and the Winter Soldier is streaming on March 19 on Disney+.