Manifest is officially going to take off once again. Fans of the NBC series have been rallying around the show after its big cancellation after season 3. And considering the huge cliff-hanger it ended on, who can blame them?! After all that drama, the show’s mystery will officially get a solution in a supersize fourth season on Netflix. Here’s everything we know about Manifest season 4. 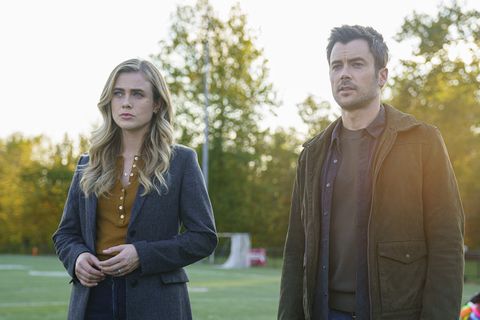 Wait, I thought Manifest was canceled?

I mean…technically, yes, it was. NBC axed the show back on June 14, 2021. The move was actually a last-minute decision for the network because cast contracts were set to expire the next day. It was also surprising for some newer fans since the show was at the top of the Netflix Top 10 as more people binged the series for the first time.

Okay, so, explain the saga of season 4, plz.

After Manifest’s cancellation at NBC, fans (and the cast and crew of the show) rallied, which, combined with continuously strong viewership numbers on Netflix, worked together to increase the show’s chances of renewal.

In August, Warner Bros. TV (aka the show’s production studio) was said to be finalizing negotiations with Netflix to get a season 4 in order, according to Deadline. Negotiations and “if-come” offers had been made to cast and writers too, but nothing was certain juuust yet.

Even though the series was canceled by NBC, and the network seemed as if it started to have a change of heart to keep the show after it has stayed firmly in the Netflix Top 10, Manifest likely wouldn’t return to the broadcaster—or even its streaming service, Peacock—if renewed, reported Deadline.

So much Netflix fan love for the show rained in, which likely played a role in a plan to revive Manifest. And when we say fan love rained in, we mean it poured in. #SaveManifest has frequently been a trending hashtag on Twitter, and Manifest enjoyed a four-week streak on top of Nielsen’s U.S. streaming chart. #SaveManifest even caught the attention of the Manifest crew themselves, including Josh Dallas (who plays Ben Stone), who went ahead and tweeted his own support: