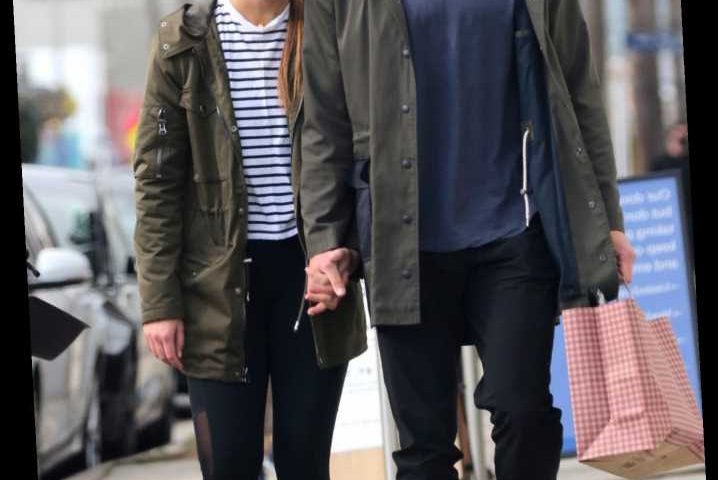 Hannah Brown may have a new leading man in her life.

The former Bachelorette star, 26, sparked romance rumors after she and model Adam Woolard were spotted holding hands over the weekend in Los Angeles.

The two kept close during their Saturday stroll down Abbot Kinney Boulevard in Venice Beach, both sporting face masks to stay safe amid the ongoing coronavirus pandemic.

Brown and Woolard both dressed casually for their outing and shared a matching moment in army green jackets.

The Alabama native paired her coat with a striped shirt, black leggings, a Los Angeles Dodgers hat and black sneakers. Meanwhile, Woolard opted for a pair of black joggers, a blue t-shirt and Nike sneakers for their downtown stroll.

While Brown has yet to publicly post about Woolard on social media, eagle-eyed fans noticed that the reality star follows the model on Instagram.

According to Woolard's page, the model — who has more than 2,000 followers — also works in "Sales/Pr" for fashion label Greg Lauren and is a meditation and lifestyle coach.

In November, Brown told fans that she would be "putting [herself] out there" and would be dating again for the first time since The Bachelorette in 2019.

A month later, fans began to speculate that Brown had a new man in her life after she posted a photo with a mystery man from her "last date" on her Instagram Stories.

As fans will remember, Brown turned down Tyler Cameron's proposal on the Bachelorette finale and got engaged to winner Jed Wyatt. She later called off the engagement after learning that Wyatt allegedly had a girlfriend when he was on the show.

Despite turning Cameron, 27, down, the two remained friends and even spent time together in 2020 amid the coronavirus pandemic, social distancing with their "Quarantine Crew."

While many speculated that Brown and Cameron were romantically involved while isolating together, the pair squashed the romance rumors in October. In a YouTube video, titled "What Really Happened," Brown insisted that nothing romantic transpired between her and Cameron in quarantine: "People think we were hooking up the whole time. Never kissed."

"We went from a dating show where it didn't work out, then not talking to each other, trauma happens, we hang out, to living together," Cameron said. "Twelve times more the amount of time in that house together for those 18 days than we did on the show."