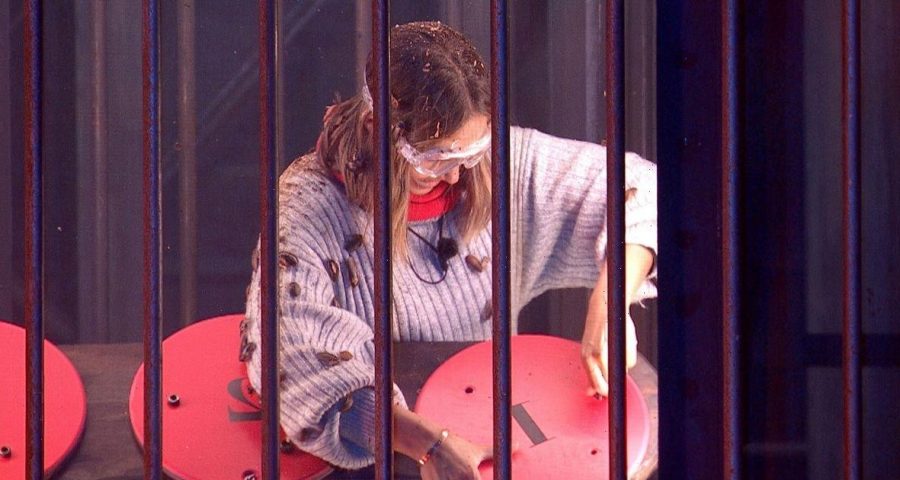 Frankie Bridge faced her fears and taken on the first task in I’m a Celebrity… Get Me Out of Here! after she admitted she was “scared of most things.”

The former Saturday’s singer was voted to face the first trial, Turrets of Terror alongside with TV presenter, Richard Madeley – and went on to triumph in the task.

After the other eight campmates defied gravity to walk the plank off a Welsh cliff top, the duo had to work through a series of tasks on each floor of the turret to get keys to open the padlocks on the doors and move up to the next level.

As usual on I'm A Celeb, castle critters joined Frankie and Richard on their challenge including cockroaches, mealworms and maggots.

Frankie stormed ahead in the task, determined to help her team get the key to castle at the top of the tower. Without stopping, Frankie screamed: "They're all down my back” before adding that the critters were “biting” her.

Yet, none of this fazed the mother of two as she turned Allen keys to release discs, and ran up to the next level to undo knots. She joked “I was never gonna be a sailor" as she quickly unravelled the rope.

The focused star raced to the top of the tower after completing all three levels and hooked her star to get the win her team the key to the castle.

Frankie screamed in delight as she waved the key and Ant commented that it was like "she’s won the FA cup.”

The singer added that she thought she "was going to lose" after the team worked so hard all day on their own trials.

Before arriving at the castle, Frankie revealed that she the thought of doing the show was terrifying, but she was determined to conquer her fears.

The 32 year old said: “I’m scared of most things, but I want to push myself and show a side people have not seen before.”

When she signed up for the show, the star revealed she was “scared of most things” and that she even has a phobia of tomato ketchup. Frankie explained: “I think people will be surprised to see me doing I’m A Celebrity and I am scared of most things, but I really want to push myself.

“I’m scared of rats, I am a fussy eater and I have a bit of a phobia of ketchup, so a pint of penis terrifies me! Any of the eating challenges will be my idea of hell.

"I also hate spiders in my own home, being trapped in small spaces is a big thing for me and pretty much all of that is likely to happen which makes me go, ‘Why the h*** are you doing it?’ And so that is exactly why I am doing it!”

Frankie’s husband, Wayne Bridge, 41, took part in the show back in 2016 when the stars went into the Australian jungle.

She added: “Ever since Wayne took part, he has been desperate for me to do it too and he can’t wait to watch me squirm and scream!

"My kids are still quite young, and they still think I am quite cool – so there is a very small window for them to watch it and not be embarrassed! I feel now is the time.”

Pals close to the singer told OK! that Frankie is going into the castle to "test herself." Our source added: “She loves being a wife and mum but wants to test herself."

Stay up to date with all the latest on I'm A Celeb by signing up to OK!'s daily celebrity newsletter .