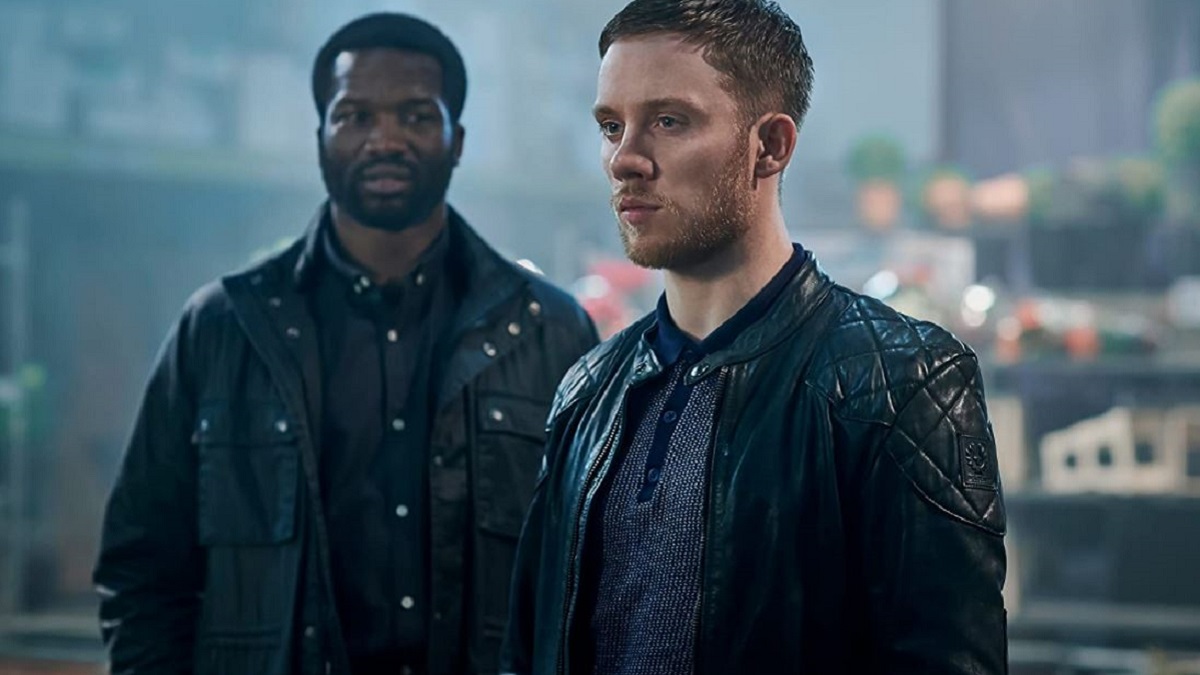 Gangs of London is returning for Season 2. All nine episodes of Season 1 of the fast-paced, action-packed crime drama series debuted on Sky Atlantic (U.K.) in April 2020 to positive reviews and enthusiastic audience response.

Gangs of London was Sky’s most popular drama series in 2020. The opening episode of the series on Sky Atlantic attracted a seven-day cumulative audience of 2.23 million, making it Sky’s biggest opening ever for an original drama series in the previous five years.

The series — set in London — follows the rivalry between organized crime groups in the city.

Season 1 ended with Elliot shooting Sean and helping Alex escape as police arrived. But Elliot was later captured and tortured by men who appeared to be police officers. They were trying to extract information from him about who he was working for.

If you’ve been looking forward to Gangs of London Season 2  and eager to see what is next for Elliot, here is everything we know so far about the upcoming season.

This article provides everything that is known about Gangs of London Season 2 and all related news. As such, this article will be updated over time with news, rumors, and analysis. Meanwhile, let’s dig down into what is known so far.

Is there going to be a Season 2 of Gangs of London?

Sky and AMC confirmed the renewal of the series for another season on June 24, 2020.

Gangs of London Season 1 premiered on Sky in April 2020. Sky co-produced Season 1 with HBO’s Cinemax. Season 1 was initially scheduled to air on Sky and Cinemax, but it aired exclusively on Sky after Cinemax ended original programming in January 2020.

For Season 2, Sky is partnering with AMC as co-producer, alongside Pulse Films and Sister Pictures.

Release date latest: When is Gangs of London Season 2 likely to come out?

While speaking at the Edinburgh TV Festival in August, show executive producer Thomas Benski revealed that Gangs of London Season 2 was already in the works. However, he did not share any specifics about the possible return date for the series.

Series co-creator Gareth Evans revealed during an interview with Radio Times that it took three years to finish Season 1 and that they have “big plans” for the upcoming season. This led to speculation that fans might have to wait until 2022 to see Gangs of London Season 2.

Gangs of London Season 1 is set to premiere on AMC+ on Thursday, October 1.

Sope Dirisu will return as Elliot in Season 2.

Elliot appeared to shoot and kill Sean (Joe Cole) in the Season 1 finale. He shot Sean on the side of the face, but it was not clear whether he died.

Co-director Corin Hardy appeared to confirm in a chat with Den of Geek that Sean was dead. But co-creator Evans said they left the question open by making Elliot shoot Sean in the cheek.

“I think we’ve kept that pretty open, in terms of where Elliot shot him. If it had been dead center, then yeah, absolutely.”

Fans will have to wait until Season 2 to find out whether Sean died and whether Cole is returning for Season 2.

However, even if Elliot killed Joe Cole’s character, Sean, he could still return in flashback scenes.

Michelle Fairley is expected to return as Marian after surviving being shot by Ed (Lucian Msamati). She only feigned death when Ed shot her.

Others expected to return in Season 2 include Paapa Essiedu as Alex, Lucian Msamati as Ed, Pippa Bennett-Warner as Shannon, Richard Pepple as Mossi, and Arta Dobroshi as Floriana.

Valene Kane could return in Season 2 or future seasons as Jacqueline and Brian Vernel as Billy.

Narges Rashidi could also return as Lale, Asif Raza as Asif, and Orli Shuka as Luan.

Director Xavier Gens teased in the chat with Den of Geek that a new villain could be introduced in Season 2.

What is Gangs of London About?

Finn’s oldest son and heir, Sean, fights for control of his father’s crime empire. Backed by strong allies such as the Ed, the leader of the Dumani family, he fights off contenders. But soon, tension rises between Sean and the Dunamis, while Elliot — an employee of the Wallace family who is also an undercover cop — joins the fray.

In Season 1, Sean’s effort to bring his father’s killers to justice ends with the discovery of a shadowy group of investors who were behind the assassination. Sean wants to bring down the investors.

In the closing scenes of Season 1, Sean discovers that Elliot is an undercover cop. Although he is shocked, he tries to convince Elliot to help him bring down the investors and gives him a SIM card containing incriminating information about them.

However, Elliot also appears to be secretly working for the investors, and after convincing Alex not to kill Sean, Elliot ends up shooting him.

The police capture Elliot and torture him to extract information about who is working for. A medic helps to get him released.

At the end of Season 1, the investors promised to contact Elliot. But Elliot is still holding the SIM card Sean gave him, and he appears resolved to bring down the investors.

Fans will learn more about the mysterious investors in Season 2 and who is their leader.

Season 2 will likely focus on Elliot’s crusade to bring down the powerful and mysterious investors. This means that if Sean survived the shooting, he and Elliot could team up to fight the investors.