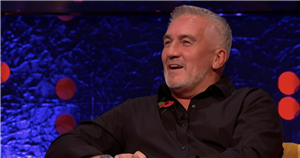 Paul Hollywood has admitted he "broke down" after his father revealed that he was proud of him.

The 55-year-old Great British Bake Off judge appeared on the latest edition of The Jonathan Ross Show on Saturday night.

Paul said his dad had found praise difficult in the past.

Speaking to chat show king Jonathan, the TV personality said: "He was a good baker my dad. He's still around.

"I think it's quite difficult to work with family.

"You want to find your own way sometimes. I just wanted to expand.

"I think he was harder on me because I was his son. He gave me more s*** than he did anyone else."

Paul continued: "I remember the head baker was off once and I had to do everything on my own, I was really scared. I filled the shop.

"I was really proud of that.

"Dad took a glance, just before he left he said, 'Bottom tray you burnt a couple down there'.

"I was gutted, absolutely gutted." Maybe it was to get the best out of me.

"He put me with the best guys he had in his business so I could learn from these older guys. I learned pretty quickly.

"He did a good job, I learnt quickly but praise was something he found difficult to do I think.

"Recently he said something to me which choked me up."

Paul went on to open up about the sweet moment between the father and son duo.

"To hear that from him, I broke down a little bit."

Paul, who judges on the Channel 4 show with Prue Leith, said the latest series of Bake Off had seen the best standard yet, but that filming had felt like a "baking cult".

He added that the show was now "very much part of my life" and that he would like to present it well into old age.

Paul joked: "They're going to have to wheel me in… blitz everything for me as well to drink rather than eat. I love that show."

Singer Jessie Ware also chatted to the presenter and performed in the studio.

The Jonathan Ross Show airs on Saturday nights at 9.30pm on ITV