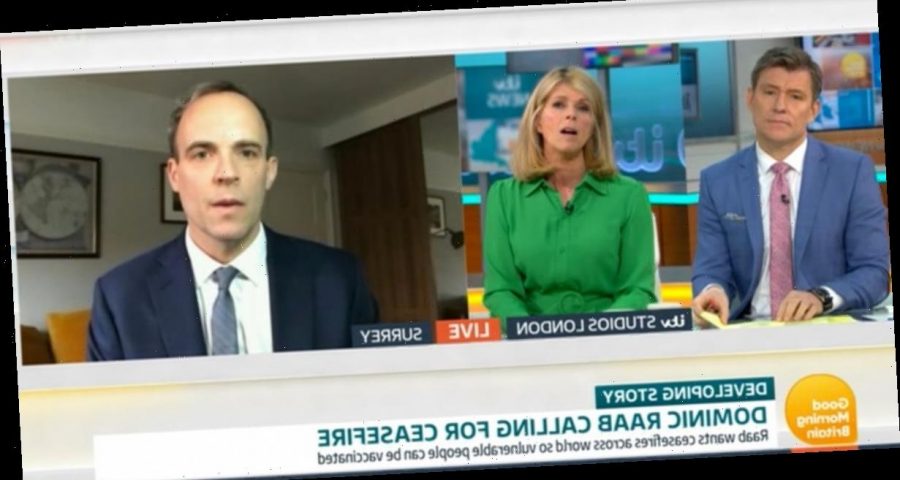 Good Morning Britain host Kate Garraway found herself in an awkward clash with Secretary of State for Foreign, Commonwealth and Development Affairs Dominic Raab during Wednesday's edition of the ITV breakfast show.

The 53-year-old presenter and co-host Ben Shephard, 45, welcomed Mr Raab onto the programme to discuss the latest developments in the coronavirus pandemic.

However, thing turned awkward when Kate quizzed the politician over the government’s mandatory hotel quarantine policy.

Kate said: "It's all very well to have to have the idea but it's about putting something in place to see it through isn't it?"

Mr Raab replied: "Of course enforcement is difficult in a country where we don't have the control over the law enforcement authorities."

Kate stepped in and said: "It's here what I'm talking about where we do have control."

The politician fired back: "Can you let me answer the question?"

"Yes but you're saying things I haven't said so I've got to clarify otherwise you're not going to have a chance to answer the question if yo haven't understood it," Kate responded.

Mr Raab added: "‘Why don’t you pause and let me explain it. People get fed up with the media not allowing us to give honest answers."

Viewers were left on the edge of their seats, some with rushing to their keyboards to defend telly favourite Kate after the interview with the "rude" politician turned fiery.

Taking to Twitter, one fan penned: "Well someone got out the wrong side of bed didn’t can’t believe how rude @DominicRaab is being to @kategarraway on @GMB I always thought he was a more decent person."

A second person posted: "Watching GMB @DominicRaab not answering @kategarraway questions properly and accuses her of being rude when she asks the question again. Raab not able to answer why international quarantine isn’t being enforced." While another added: "Go @kategarraway! Dominic Raab thinking he can roll his eyes and give you tude! Don’t think he expected you to challenge him like this. He wouldn’t have tried this with @piersmorgan …RUDE!"

A fourth social media user added: "Dominic Raab is beyond rude! @kategarraway is doing her job holding ministers to account on @GMB when other media won’t."

A fifth viewer said: "Go Kate!! Dominic Raab is properly rattled!! He can’t be rude to our Kate like that, she’s asking legitimate questions!"

A sixth person said: "@DominicRaab you need to apologise to Kate. There was no need to be so rude, there’s no way you would have spoke like that to Piers.

Mr Rabb went on to accuse Kate's of having a "cynical" view while television presenter told him that she was just asking the questions people wanted to the answers too.

After the tense interview came to an end, Kate asked Ben: "Did I get an answer? I don't know whether we did."

Good Morning Britain airs weekdays on ITV at 6am