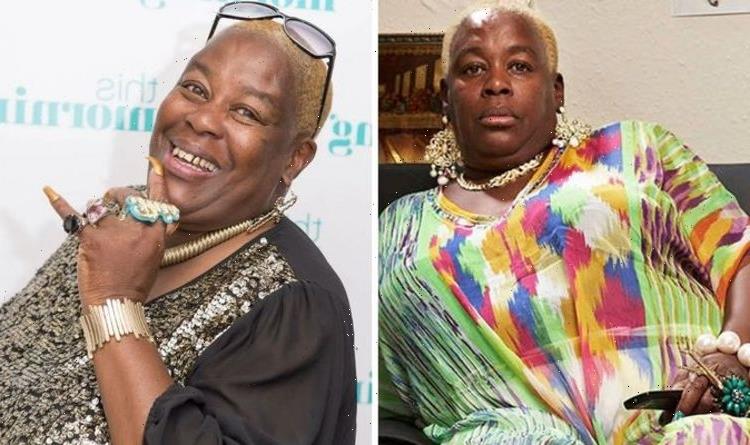 Loyal Gogglebox fans will remember the hilarious Sandra Martin for sporting tons of jewellery and using a pot noodle carton as a cup. Since her departure from the Channel Four series, the star has unveiled a number of secrets including Gogglebox’s rules on appearing on other shows.

Sandra Martin first appeared on Gogglebox’s first season alongside her best friend Sandi Bogle and the two were an instant fan favourite.

Adored for their hilarious banter, commentary and relatable love for takeaway, viewers were shocked when Sandi left and the two parted ways in 2016.

While Sandra was briefly joined by her daughter Chanchez, Sandi decided to pursue other career opportunities

By 2017, Sandra also decided to say goodbye to Channel Four after claiming it wasn’t the same after her best friend left.

Speaking to her thousands of social media followers, Sandra stated: “Apparently when you leave you can’t go back, but Channel Four knows me and my TV partner go back the ratings will go sky-high. But unfortunately, Channel Four likes it like this.”

She then went on to explain a hidden rule and claimed participants are not allowed to star in other shows while on Gogglebox.

She disclosed: “After Sandi left I missed her so much, plus it was a contract show – you can’t do certain shows like Big Brother if you on Gogglebox. Anyway am happy, 5 years on the sofa was good enough.”

Sandra had an appearance on Celebrity Big Brother lined up, but was left red-faced when she lost after discussing the exclusive deal too much.

Despite this, she starred on other shows including Celebrity First Dates and 100 Years Younger in 21 days.

This rule comes as a surprise, as fans remember when George Gilbey returned to the couch alongside his parents after starring on Celebrity Big Brother in 2016.

When the family first joined Gogglebox in 2013 they were an instant hit, but after George’s departure in 2014 to appear on the reality series, he surpassed expectations and became a fan favourite.

Although his time on Celebrity Big Brother was deemed to be a rule-breaker by bosses, fans were taken by surprise when he returned in 2016.

Meanwhile, Sandra’s best friend Sandi went on to appear on other reality shows including Celebs on a Farm, Celebrity 100% Hotter and Celebrity Fat Fighters.

Other past participants, including Scarlett Moffatt, went on to become a huge success after rising to fame on Gogglebox.

Since her stint on the show, she became queen of the jungle when she won I’m A Celeb in 2016 and has rarely been out of the public eye.

The following year she co-hosted the National Television Awards alongside Dermot O’Leary and was part of the royal wedding coverage for Radio One in 2018.

Elsewhere, Sandra gave fans an insight into working for the show and revealed how they were able to turn over 16 hours of filming into a one-hour episode.

The reality star also unveiled how she was able to get her hands on a different takeaway every episode when talking about the many perks.

“The crew would buy me takeaway every night and they’d have takeaway too. We had all the menu leaflets – KFC, Burger King, Chinese, McDonald’s.”

Gogglebox seasons 1-18 are available to stream on All4.