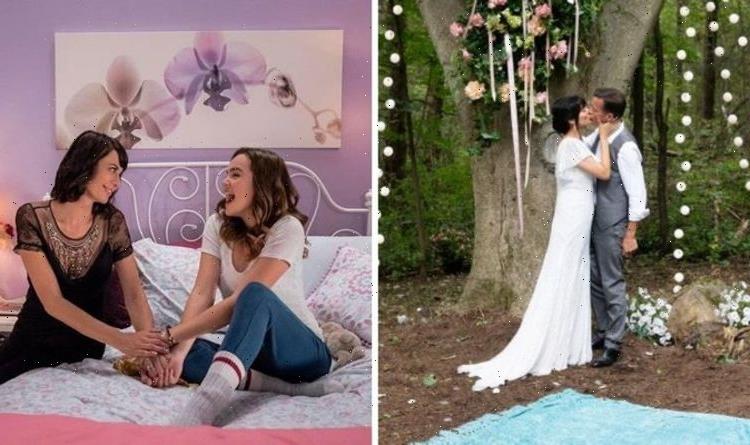 After seven seasons, Hallmark’s comedy series has come to an end, the network announced the sad news last week and fans are reeling. As well as taking to social media to react, the cast members have also posted their tributes and goodbyes to the Good Witch.

Catherine Bell played Cassie Nightingale in the series, who she also portrayed in the movie.

The series followed Cassie and her daughter Grace Russell (played by Bailee Madison) and other locals of Middletown as they go through life with the gift of enchanted insight and magical intuition.

Fans saw their skills come into play when their new neighbours Dr Sam Radford (James Denton) and his son Nick Radford (Rhys Matthew Bond) move in next door and become suspicious of their neighbours.

Later on in the series and after tons of magic, the two neighbours eventually become family, in the season five episode titled The Forever Tree part two, when Sam and Cassie fall in love and decide to get married

Actress Catherine, even left her own character a heartfelt message on her Instagram post which read: “Don’t cry because it’s over. Smile because it happened!- Dr. Seuss”

“I am so grateful for 7 seasons… and 13 years (of movies) of being a part of Good Witch, working with the KINDEST and most talented cast & crew, producers, network! It has always felt like family,” she added

Talking about her character she put: “Cassie Nightingale, a woman who is always positive, inspiring and uplifting, someone who brings out the best in everyone she meets, makes life better for everyone around, and always sees the glass half FULL.”

“She has inspired me to be a better person, to be kinder, gentler, more loving and accepting,” she included.

The actress also addressed her fans and stated: “I know that many of you have felt the same I feel so fortunate.”

She added: “I know we will all miss the Good Witch and all the amazing characters and stories, but I am definitely smiling because it happened.”

Tons of fans took to her comments to share their dismay and upset: “Sad to see this show end.”

Another fan commented: “Love you and will always love this show.”

Other viewers were beyond devastated by the unexpected cancellation news and also expressed this in her comments.

“Please don’t stop this show it is the best show on, love all the actors and actresses I am really disappointed and sad.”

Another posted: “I cry because I can’t stay without you, maybe I need a few days to digest this bad news but I hope in something new with you PLEASE.”

“So sad, I watch the show over and over again on Netflix usually starting in the fall, thank you @therealcatherinebell and all of the cast for such a positive show,” another fan shared.

Whereas this viewer shared their appreciation: “I’m so sorry, Catherine. Sending you so much love and gratitude, Cassie will always have a special place in my heart.”

Having spent 13 years playing Cassie Nightingale, it’s no surprise that both the fans and star of the show Catherine Bell were upset, but with the sheer number of fans, it’s safe to say they also look forward to whatever the actress decides to do next.