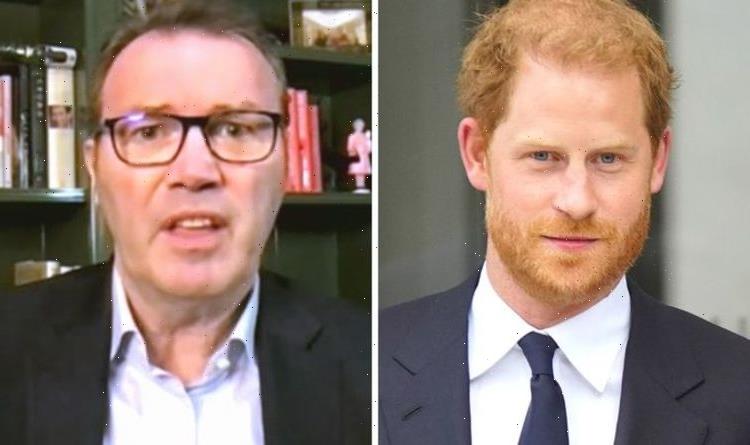 On Wednesday’s This Morning, ITV hosts Holly Willoughby and Phillip Schofield spoke with journalist Andrew Morton about his new book titled, Meghan: A Hollywood Princess. The author’s new biography is based on Meghan Markle, although, he admitted to the hosts he wasn’t given permission by the Duchess of Sussex to write the book and he has never met her. Andrew explained he had spoken with Meghan’s former teachers and school friends in order to gather information for his biography.

However, during the discussion, Andrew made a number of claims about the Duke and Duchess of Sussex which has been published in his book.

He claimed Prince Harry “threw a fit” when his wife’s tiara didn’t arrive from New York on time.

Phillip went on to ask him: “How do you know what you’re saying is true?”

Andrew explained he spoke with people who knew Meghan before she joined the Royal Family.

“Her former teachers and school friends,” he insisted.

Andrew’s admission about Prince Harry came after Phillip asked the author about his views on the royals and how they thought the “entire institution was against them”.

“It seems to me that he did feel that ‘the men in grey’ as what they were dubbed, were quite hostile,” Andrew claimed.

“And he took umbrage for example when the hairdresser arrived from New York for a fitting for the tiara and the tiara wasn’t available and he threw a bit of a fit.”

He added: “And it was Meghan who got it in the neck as the ‘Duchess Difficult’.”

“When you look down through the years, the Royal Duchess is the one that takes the flack.

“Fergie [Sarah Ferguson] got the flack early on in her marriage, (Princess) Diana was called a fiend and a monster after she’d been in the family for about 18 months or so.

“It is the case that the woman gets the blame,” claims Andrew.

Andrew went on to discuss Princess Diana being the “third wheel” in the marriage of Harry and Meghan.

He told the hosts: “Harry said so. When you look at their decision making, it’s been to protect Meghan’s safety and security, Archie and Lilibet.

“Harry said it’s been his priority and one of the reasons they decided to leave the Royal Family was because they didn’t feel their children were going to get the kind of protection they needed.”

When asked by Phillip whether he was anti-The Firm and Andrew protested: “No, I’m trying to understand Meghan and as a human being, how did she relate to The Firm?”

He claims: “In many respects, The Firm is far more malleable and accommodating than it was in the past… But it is a clash of the new world versus the old world.”

Phillip concluded the interview by quizzing Andrew on whether he thought Meghan was aware of what the Royal Family was about before marrying Prince Harry.

He told the hosts: “She didn’t read the tabloids, she didn’t watch TMZ, she learnt what she learnt from Harry.

“Harry was quite jaded with the Royal Family, even before this. She’s had a very rambunctious education into the royal world.

She’s had members of the household give her advice and she’s a quick study, but it takes many years for someone to accommodate themselves into the Royal Family.”