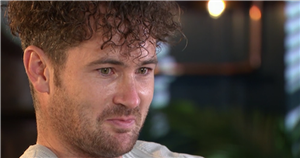 Hollyoaks appeared to rule out suspects in the frame for murdering George Kiss during Friday's first-look episode on E4.

Dean Vickers (Paul Sloss) recently returned to the village in the wake of his ex-boyfriend's death and his arrival raise more than a few eyebrows.

Nancy Hayton (Jesica Fox) made Dean the prime suspect in her own murder investigation and tried to get a confession from him via a phone recorder.

The teacher is certain that her best pal John Paul McQueen (James Sutton) is innocent, after he charged with murder last week.

She has since made it her mission to find out the truth about what really happened to George.

Nancy played the recording aloud to the McQueen clan from her meeting with Dean, where he admitted he was in the village the night George was killed, and one of Goldie McQueen’s (Chelsee Healey) comments gave her an idea.

Complete with a meta detector in hand, Nancy set out to find the murder weapon in a bid to help John Paul.

Darren Osborne (Ashley Taylor Dawson) offered her some advice, telling her that she should drop her investigation and allow the police to find out what really happened.

Nancy agreed with her ex, and informed Dean of her decision.

Later in the episode, Dean decided to leave the village, but as he walked through the park, a mystery figure could be seen watching him from the bushes.

After Dean was out of sight, this person then moved the murder weapon which was buried in the park.

Viewers were quick to point out that this ruled out Nancy and Dean as being George's killer.

Taking to Twitter, one fan posted: "Well thinking Dean was George's killer has gone out the window now."

Another added: "It’s obviously not John Paul or Dean and not Nancy, unless you forgot where she buried it and the metal detector was to help her dig it up…hmm."

A third viewer said: "So it’s not Dean? or Nancy?

Some later went on to predict who could be responsible for the crime, and others didn't rule out Dean being part of the murder.

One fan tweeted: "I think its Sally. Its not Nancy, Dean, John Paul or Theresa."

A second person wrote: "I’m still going with Sally and this pretty much confirms that it’s not Dean as he was wondering around the village."

"This does not rule Dean out. I think someone buried it there to cover it up for John Paul because they think he did it. I think it was a McQueen! We’ll have to see," a fourth fan typed.

PC George Kiss was brutally murdered earlier this month after a bust-up with his boyfriend John Paul.

Hollyoaks airs weekdays on Channel 4 at 6.30pm followed by a first look on E4 at 7pm