In real life, tour buses look somewhat anonymous at best, and like they’ve eaten decades worth of highway dust at worst. That simply wouldn’t do for Deborah Vance. So when the posh comedian took her show on the road for the second season of “Hacks,” production designer Alec Contestabile and his team had the task of building an environment for Deborah (Jean Smart), Ava (Hannah Einbinder), Damien (Mark Indelicato), and tour manager Alice (Laurie Metcalf) that was as ambitious and visually interesting as Deborah’s cross-country itinerary.

“We were very intentional going into writing the third episode,” co-creator Jen Statsky told IndieWire. “We wanted [the bus] to have things that were custom and special and would be funny for people to see Deborah have. So the LED bed, that was written in. It was always designed that Ava would have an incredibly tiny top bunk — with her nose almost touching the ceiling was the way we described it in the script — and that Deborah would have a huge primary bedroom.”

Statsky said that she and fellow co-creators Lucia Aniello and Paul W. Downs wanted to retain key elements that had become iconic in Season 1, like Deborah’s custom soda fountain, which are key to the character’s glamorous style and also add a little bit of wish fulfillment for the audience, too. “We didn’t want to lose that,” she said.

When designing the bus’ interior, Contestabile had to merge elements of a kitchen into a living space into sleeping quarters and a custom case full of high heels, a process that was akin to playing both Tetris and Jenga at the same time. “Designing a tour bus, it’s like designing an entire house with no walls,” Contestabile said. “We wanted to make a conscious effort to make it feel like this is her place. It feels like someplace that she would live and [we took] the same design motifs started in Season 1 and continued those throughout the show.” These motifs don’t just take the form of the color, texture, upholstery, and fabric choices Contestabile made while designing. The bus also echoes the way that Deborah’s mansion acted as a visual expression of her personality in Season 1. The downstairs of her Vegas home has hardened edges and a more showy exterior, while the upstairs is much softer in its upholstery and acts as more of an inner sanctum. On the bus, Contestabile said that he broke out that progression into three sections: two public-facing portions where the look was slightly more polished, with harder surfaces, and then Deborah’s bedroom, deliberately set apart from the rest of the bus with a sliding door.

“[Deborah’s room] was something where we took some liberty. No tour bus really does that, but we designed [her bedroom] purposely as kind of like this emanation point, so when you look straight down the barrel of the bus, she’s the centerpiece,” Contestabile said. 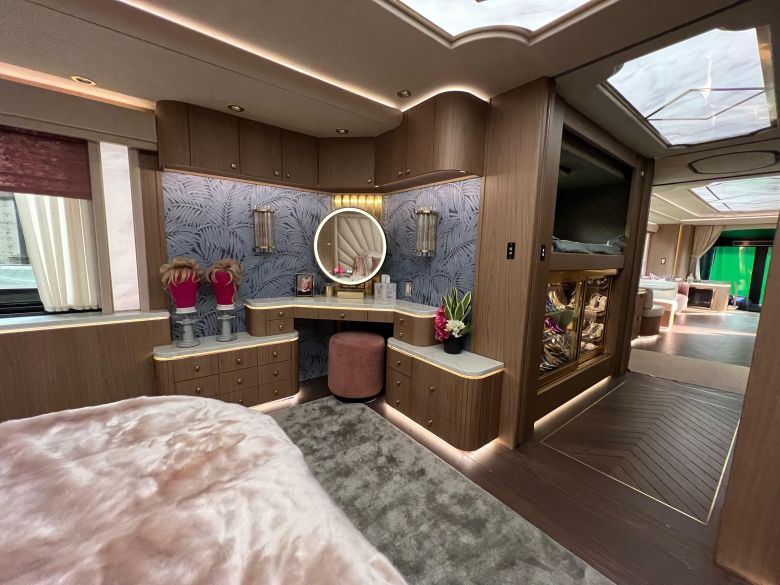 The tour bus set of “Hacks”

Engineering some visual continuity with Deborah’s mansion gave “Hacks” some license to try and make different sets and go to different places. “Knowing that our team has such a firm hold and understanding of the visual language of the show — what it’s supposed to look like, what it’s supposed to feel like when you’re watching — everyone is so keyed in now, especially in Season 2, [that] it gives us a lot more freedom to know that we can kind of execute anything,” Statsky said.

The visual continuity doesn’t come through just in broader choices about color tone and mood, but also comes through the (slightly downsized) inclusion of iconic elements from Season 1, like pieces of Deborah’s dressing room at the Palmetto. “We took that circular mirror and we actually went to the same vendor that made the wallpaper because the other great element [of the dressing room] was that palm frond-y wallpaper. We found a similar style wallpaper that had palm fronds but these ones were a bit more chaotic, and not as put together, because Deborah’s life is no longer in order now,” Contestabile said.

There are several chaotic demands placed on the hourglass bottleneck where Ava and Damien sleep. Even just in Episode 3, the space is tested to its limit by adding in an antique dresser Deborah picks up at a yard sale. The space deliberately feels smaller than the other two sections; designing that part of the bus was a balance between creating a more claustrophobic feeling in that area by eating into the space’s height and width and meeting all the demands of the space set out in the script. “We did lots of tests to figure out the right height [for Ava’s bunk]. We want her to feel extra small,” Contestabile said.

The bottleneck opens up in the public area/kitchenette of the bus, which Contestabile said needed to look as magnificent and imposing as Deborah’s star persona and features Statsky’s favorite detail: a fake electronic fireplace, “because it’s so insane.” That detail, as well as all the others, Contestabile had to put in from scratch.

“All of the walls were a product called Belbien, which is a custom wood sticker paper, which was very hard to work with and would bubble all the time but looks great on camera,” he said. “Then the floor was this very specific chevron pattern that [Downs] had a vision for. Then we did a custom brass inlay all around it.” Although subtle, the front of the bus also cheats physics a little bit with a more open and wider space that allows Deborah to lounge with impunity. “We know we’re making a visual show. It needs to look compelling,” Contestabile said. 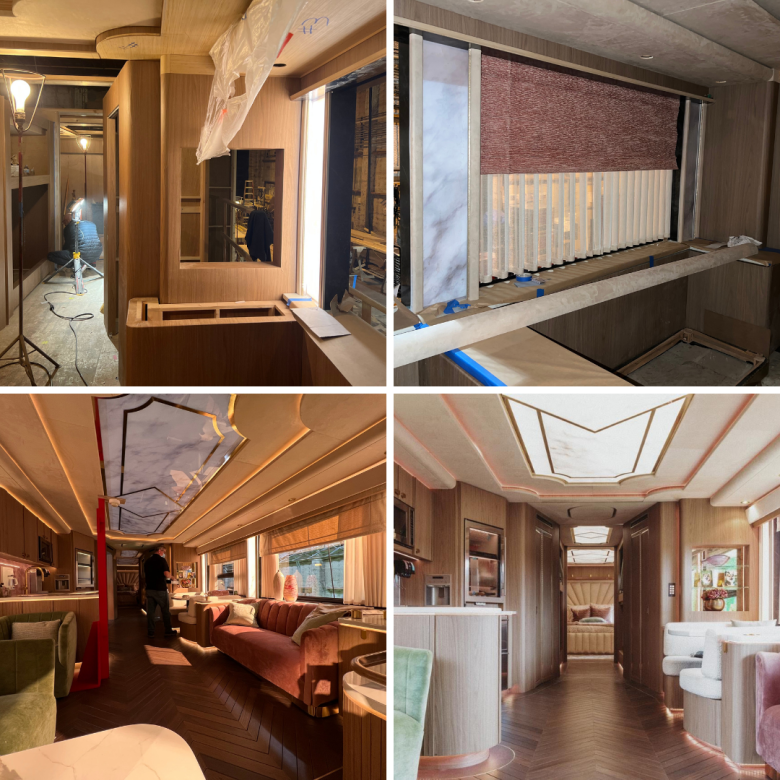 Even with those marching orders, some details on the bus are there just for fun. Contestabile said that Aniello supplied the idea of giving the bus’ exterior hot pink tire spikes. For the rest, the team repurposed Blink-182 drummer Travis Barker’s actual tour bus with a coat of white paint and a curly pink decal of Deborah’s initials. This minimalist exterior is both an elegant choice in keeping with Deborah’s taste, but it’s another subtle hint that she’s in a slightly more embattled place in her career, not overtly advertising herself as she travels around the United States. Her level of confidence in the tour, like the bus itself, is a complicated custom piece of work.

Statsky said that one of the most fun and most important parts of designing the bus was checking out the real thing. “We had a lot of tour buses come to Universal where we shoot, because as silly as it is — as much as we want what Deborah puts on our custom bus to play for comedy — we also always want the show to feel real and grounded in the world,” Statsky said. “And so it was important to us to look at real tour buses to see what rock stars and comedians actually do travel around on.”

The most unshowy part of the bus, the driver’s seat, was grounded in a surprising way. “Our art director, Rob Tokarz, found a salvage record tour bus under a bridge in San Francisco,” Contestabile said. “There were bullet holes in the windows. It was great. And we had it towed all the way down to LA, and essentially they cut off the front of the bus and we rolled it in and out from camera. It was a Privo bus and we reached out to Privo and they were a huge help replacing the steering wheel and really getting that whole front end back up to the high-end bus standards. I think it [used to be] a tour bus that would take Chinese tourists from LA to Vegas, so it even had a Vegas connection.”