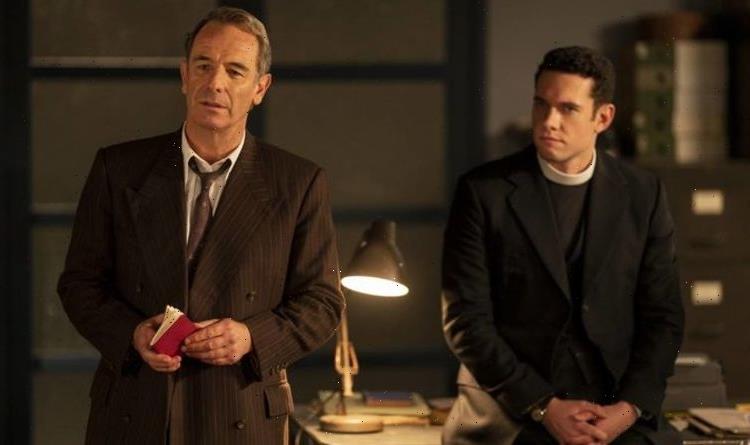 Grantchester is the period police procedural drama set in the 1950s Cambridgeshire village of the same name. The ITV series is about the unlikely friendship and professional relationship of DI Geordie Keating (played by Robson Green) and Reverend Will Davenport (Tom Brittney) who solve crimes together. The pair go for a much-needed break but they are soon back to work when a body is discovered.

Teasing the premiere episode of season six, Geordie and Will are going to be heading of to Merries Holiday Camp.

After non-stop investigations, they thought it would be good to have a few days away from crime-solving but their peace and quiet is soon disturbed.

They are forced back into doing what they do best when the owner of the camp, Roy Reeves, is found dead.

Now it is up to the duo to figure out who committed the murder and why.

How many episodes are in Grantchester?

Grantchester will be returning to our screens for season six tonight, Friday, September 3, on ITV, at 9pm.

The first five series of the period crime drama have been made up of six episodes each.

So fans will be thrilled to know that the sixth season is going to be the show’s longest yet.

Grantchester this time around is made up of eight episodes in total.

The series will make its debut this evening with a new episode airing every week on ITV.

As long as there are no unscheduled intervals, the season six finale of Grantchester will be shown on Friday, October 22.

After this, the entirety of the series is going to be ready to watch on ITV Hub.

Fans of Grantchester can also watch the previous five series via the on-demand service.

If you’re living in the States though, you are going to have to wait a little longer for Grantchester’s return.

The drama first airs in the UK before being shown in America, as with past series.

Unfortunately, it won’t be this month that season six will begin Stateside.

US viewers are going to be able to watch the premiere of series six on PBS Masterpiece on Sunday, October 3.

Actor Robson Green previously teased how Geordie and Will’s relationship is going to become “incredibly volatile” in the upcoming season.

“Will sees the world how it ought to be whereas Geordie’s philosophy is that marching for peace is about as much use as praying for it, he doesn’t believe that we can sort problems out by confiding in an invisible friend.

“This causes real problems between Will and Geordie.”