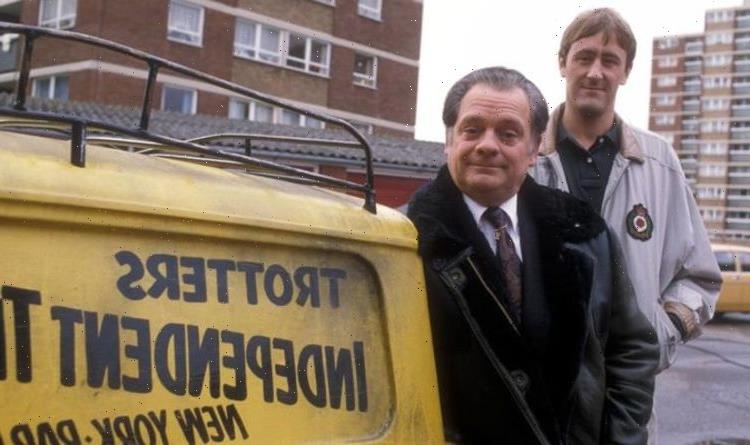 Only Fools and Horses has become one of the UK’s most cherished comedies. Starring the likes of David Jason and Nicholas Lyndhurst as Del Boy and Rodney Trotter respectively, the brothers got up to no good as they desperately tried to make themselves millionaires with their dodgy schemes. In order to do so, they had their trusty yellow three-wheeled vehicle at hand to get them around the streets of Peckham.

How much did the Only Fools and Horses van sell for?

Del Boy and Rodney were often recognised before they even opened their mouths, thanks to their little yellow van.

With its dirtied exterior, three wheels and the words “Trotters Independent Trading” on the side, it became one of the most memorable elements of the series.

The car featured in all seven seasons of the sitcom, as well as Only Fools and Horses The Musical.

The van was also weaved into a hilarious storyline in the 1996 Christmas special.

Del Boy and Rodney were on their way to what they believed was a fancy dress party.

The car then started playing up, so in order to get there, the brothers ran through the streets dressed as Batman and Robin.

But as they arrived, they soon realised it wasn’t a fancy dress party after all, with politicians dressed in formal attire.

Another scene in which the car was featured was when Del Boy and Rodney did become millionaires following an auction, where they sold a watch for £6.2 million.

They started screaming and jumping up and down in the van, making the car rock outside the hotel.

While the series might be over, there are still fans willing to pay a pretty penny for props to do with the show.

The 1972 yellow Reliant Rebel Supervan III was originally purchased by the BBC in the early 1980s.

The car was one of six which was used for Only Fools and Horses during its run for more than two decades.

An unknown buyer recently purchased the van at Silverstone Auctions in Ashorne, Warwick.

They paid a total of £36,000 for the car which is part of British comedy history.

Included in the sale was the fluffy dice, a Tax in the Post sign, the roof rack with a suitcase on top, and an inflatable doll in the boot.

The van has been painted to appear dirty, with the words Trotters Independent Trading and Paris, New York, Peckham featuring on it.

This year marks the 40th anniversary of when Only Fools and Horses first started.

To celebrate the special occasion, comedy channel Gold opened up a pop-up of the famous Nag’s Head pub this week.

The recreation was opened by actress Gwyneth Strong, who played Cassandra in the series.

She was joined by actor Philip Pope, who played Tony Angelino, and Andree Bernard, who was barmaid Nervous Nerys.

The pub was open to the public for a few days so fans could celebrate in style.

Only Fools and Horses is available to watch on Dave and Gold.