Of all the live events that pivoted to online experiences in the COVID era, Burning Man was not the most obvious candidate. The 35-year-old desert gathering thrives on chaotic communal interactions under the scorching Nevada sun, where dazed, euphoric wanderers explore vast outdoor sculptures and utopian encampments while adhering to an earthy set of principles established by the founders. Burning Man is the kind of dizzying phenomenon that would never translate to Zoom, but virtual reality is a different story.

In 2020, when Burning Man canceled its physical edition, a team of long-time Burners built BRCvr, a sprawling virtual reality rendition of the Burning Man “playa” that included both virtual renditions of art showcased in years and new offerings exclusive to the environment. Virtual “camps” allowed longtime Burners to revisit their old haunts, DJs played virtual sets, and, of course, there was the virtual burning of the man.

Now, the physical Burning Man has been canceled yet again, but BRCvr is back for the 2021 edition — and you don’t even need a fancy headset to experience it (though it certainly helps). The gathering creates an opportunity to glimpse the future of virtual creativity in action: an immersive means of showcasing art and community on a massive scale without an iota of physical impact.

The 2020 event, built on Microsoft’s social VR platform Altspace, outdid even the most generous expectations, with over 14,000 people from around the world exploring the sprawling multiverse, including many users who were using VR headsets for the first time. There over 200 worlds to explore and over 1,500 hours of live events over the course of one week. It was a striking illustration of the potential for VR to provide social experiences that could be fully gratifying on their own terms even as they filled the void of a socially distant age.

After winning the PGA Innovation Award last year and elevating awareness for Altspace, Microsoft has thrown additional resources behind the event and fast-tracked a 2D version accessible on Macs on top of the PC version. That means anyone with a reasonably competent computer can create an Altspace account and teleport into the only manifestation of Burning Man available this year.

Meanwhile, the release last fall of the consumer-friend Oculus Quest 2 has brought VR technology into even more households than last year, suggesting that this year’s BRCvr could welcome an even more robust turnout of Burners and newcomers alike.

“We’ve learned a lot about taking a culture and bringing it into a virtual space,” said BRCvr designer and filmmaker Doug Jacobson as he gave me a tour of a few worlds earlier this month. Over the course of 40-odd minutes, I followed Jacobson and co-founder Athena Demos, the former regional contact for Burning Man and executive director of the LA League of Arts, as our avatars floated through giant sculptures in the deep void of space, tried on Daft Punk helmets against the backdrop of a towering screen filled with lasers, and took in the neon signage of the main playa. “We brought this whole community with us, and now Microsoft is pouring money into Altspace to turn it into a premiere events platform,” Demos said. “But for us, it’s a labor of love.” 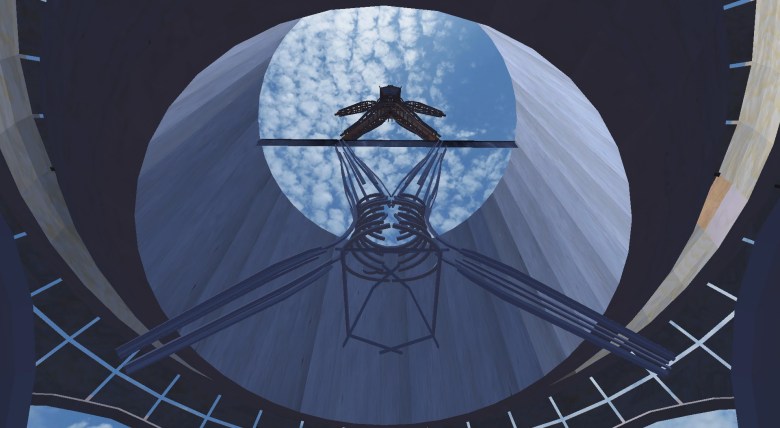 The virtual Man at BRCvr

The roots of BRCvr go back to 2014, when VR developer Greg Edwards imported photos of the Burning Man Playa in an effect to recreate it to scale in 3D. That research became the foundation of the virtual Black Rock City built six years later.

Jacobson was drawn into the project through his film work. Twenty years ago, he directed the Burning Man documentary “Journey to the Flames,” but has spent much of his career in post-production, and had been experimenting with 180-degree cameras to learn more about how to build virtual environments. Now, he’s constantly tinkering with the layout for the event and sees its potential as a new phase of film language. “It’s not going to replace 2D storytelling, or passive storytelling, but it’s a whole new branch,” he said.

The latest edition should please longtime Burners, but it also provides an opportunity to showcase the history of the event, which was previously impossible since Burning Man’s “leave no trace” ethos means that its large structures are demolished at the end of every edition. Now, visitors can peruse the Museum of 20 Temples as well as the Museum of the Man, both of which capture earlier live editions. The designers are also taking advantage of Microsoft mixed reality technologies, shooting live performers on green screens at an L.A. studio and beaming them into the virtual space. And they’ve partnered with Los Angeles arcade Two Bit Circus to host an actual physical room filled with Burning Man art and headsets for Burners in Los Angeles who might want to experiment with merging the virtual and physical experiences.

Once again, the playa will showcase a wide range of art submitted by creators as well as user-generated worlds, which means that visitors to BRCvr can roam freely for hours at a time and continue to stumble across new creations and environments with little to guide them — an experience that longtime Burners say is pretty similar to the physical edition. On September 5, before the Lotus Temple burn, William Close and the Earth Harp Collective will perform at the Temple of Transition via holokey — the same location, in the physical world, where Close preformed at Burning Man in 2011. The performance is a 360-degree green screen recording that will be teleported into the virtual environment.

Jacobson said he has been developing hubs to group together likeminded artwork to allow for a greater sense of curation, but the discovery process is crucial: Whether you come to BRCvr with a headset or on your PC, you’ll want to wander around.  “It’s kind of unpredictable,” Jacobson said. “We live in a topsy-turvy world.”

While the experiences of virtual environments may seem off-putting to people who don’t typically experiment with open-world video games or work in emerging media, they have continued to find their place amid COVID as a means of showcasing creativity exclusive to the digital space. The Venice Film Festival begins this week in person with its VR edition once again welcoming an international audience, many of whom will be unable to attend the Italian gathering in person; next January, Sundance will once again include a virtual environment for audiences who might be unable or unwilling to attend the Park City event.

BRCvr is already looking toward the potential to blend live and virtual events in 2022. “Hybrid events really are the future,” Jacobson said. “I think we can make that transition. People will come in here, feel that they’re there, and everyone will feel connected.”

BRCvr runs on Altspace from August 29 – September 7. To RSVP, go here. To create an account with Altspace, go here.