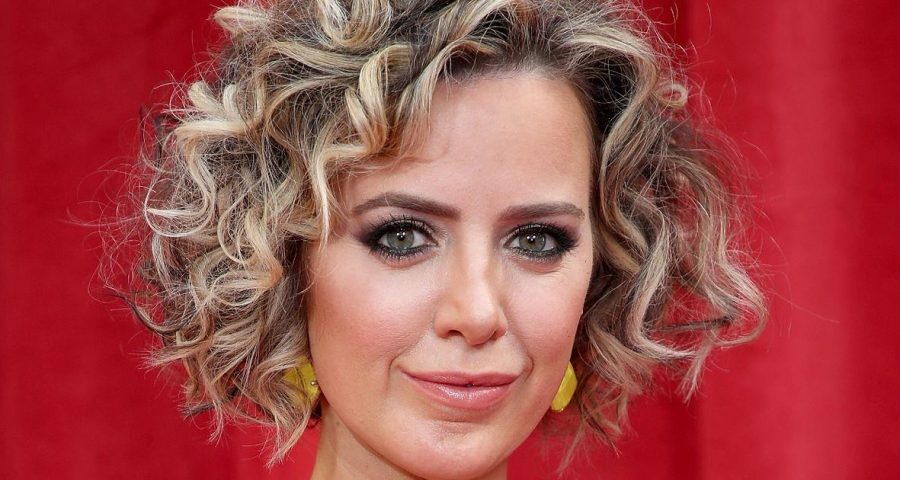 Abi Franklin recently received a shock in Coronation Street, when she unexpectedly gave birth to a baby.

However, she is determined to keep her child and is planning to go into rehab following her drug relapse – but Abi is also wondering who the father might be.

While Abi Franklin's life has taken a dramatic turn recently, actress Sally Carman's life is far less dramatic away from the ITV cobbles, including a sweet romance with her co-star fiancé, and showing off a rarely seen tattoo.

Long before Sally arrived on the Weatherfield cobbles as Abi Franklin, the actress had a leading role in one of the country's most beloved TV series.

From 2005 to 2013, Sally played Kelly Maguire in Shameless, who was the sister of Kevin Ball and married to Shane Maguire.

Following her roles as Kelly Maguire and as Abi Franklin, both of whom have battled addiction problems, Sally revealed to The Sun that she often gets typecast in this roles, but does not mind, saying: "I always go to TV interviews with my hair done, my makeup done and wearing really nice clothes and they go, ‘There we go, she’s the prostitute’, or ‘That’s the woman with the drug problem.'

"People love to cast me as the down-and-out, but it doesn’t bother me, they’re the best parts to play anyway. Some actors say they don’t want to be pigeon-holed, but for me that ship has sailed."

Along with her role in Shameless, the LAMDA (London Academy of Music and Dramatic Arts) trained actress has also appeared in major TV series including Holby City, Doctors and Prisoner's Wives.

She has also starred in numerous films including Tyrannosaur in 2011 and A is for Acid.

However, she is now delighting a new generation of audiences in Coronation Street, after only expecting to be in the series for a short stint in 2018.

Sally told OK! Magazine: "This is the brilliant thing with Coronation Street. I initially came in for six episodes and now I'm on the street and have a job in the garage.

"As for more family, you don't know do you? We'll just have to wait and see. I have no idea at all but I'm in very good hands here and I'm very happy to see what happens."

While they both might be married to other Weatherfield residents on screen, in real life, Coronation Street stars Joe Duttine – who plays Tim Metcalfe – and Sally are engaged.

The couple has been together for almost four years since meeting on the set of the show in 2018, and one year later became engaged.

Like many couples across the country however, Joe and Sally were heartbroken when they had to postpone their wedding due to the Coronavirus pandemic.

After postponing the wedding, Sally told ITV daytime programme Loose Women: "I think personally I'm not sure where we are gonna be in December, the way things have been dealt with.

"So I didn’t wanna risk arranging a wedding…. we want to have a party so if there’s only 15 people allowed to come to that, it's not great really.

"So I thought it was best we defer it for a year and hopefully get the wedding we want."

With the couple hoping to finally tie the knot in 2022, it seems that a winter wedding could be on the cards, as Sally revealed in an interview with the Mirror: "I’m obsessed with Christmas, so when Joe said, 'What’s your favourite time, when would you most like to do it?', it had to be Christmas."

She added: "we’re going to have the wedding late afternoon so it’ll be dark and lit by rows of Christmas trees and twinkly lights; I can’t wait.

"We should have been getting married this December but put it to next year because we didn’t know what the score was going to be Covid-wise."

Until then, Sally has regularly been seen gushing on social media about her famous partner, including sharing a snap of the two cuddled up together in the pub recently on Instagram.

Fans were delighted by the post, with one saying: "Oh I love the pair of you," while her Corrie co-stars also joined in and shared their love for the photograph too.

Sally Ann Matthews said: "Beauty and the beast," with a musical note emoji, while Alexandra Mardell shared a string of smiling emojis surrounded by love hearts.

When Sally is not delighting fans on Coronation Street, she and Joe relax at their stunning home, which the couple moved into in 2019.

The actress celebrated moving into their new home with a sweet Instagram snap of her and Joe cuddled up together in their kitchen, captioned: "We’re in #homesweethome #thelightisntwonkyhonest."

Fans went wild for the post as they flocked to congratulate the couple, with one saying: "Ahh, congrats you two! It looks lovely."

A second added: "Love your kitchen. Lovely couple. Happy new home," while a third commented: "Congratulations, wishing you every happiness in your new home x."

Mixing antique furnishes with modern decor, the couple certainly seem settled in their home – with Sally giving fans the occasional glimpse into their private life on social media.

Fans have since been treated to glimpses of the beautiful home, which features beautiful hand painted artwork, oak flooring and a stunning standing silver bath tub, with many asking where she gets her furnishings from.

One fan said: "Omg where is the bath from, with a second adding: "LOVE YOUR BATH!"

When Coronation Street resumed filming in 2020 amidst the Coronavirus pandemic, Sally Carman was spotted leaving the ITV studios showing off her rarely seen arm tattoo.

The tattoo sleeve covers her left arm, and features stunning floral details, decorated with birds, which wraps itself around her arm from the wrist to the elbow.

Onlookers could see the tattoo while Sally strolled away from the studios wearing a white t-shirt, jeans and Birkenstock sandals.

However, it is not the only glimpse that fans have had of the tattoo, as Sally has shared photos of the sleeve on social media previously.

Sally posted a photograph before an event, captioned "Lumbumba #herewego", with the star wearing sunglasses and a printed dress, which showed off her arm tattoo.

Fans shared their love for the look on social media, with one commenting: "Looking beautiful! Enjoy," while a second added: "So, so cute."

Even fiancé Joe Duttine couldn't resist sharing a sweet comment on the post, saying: "You rock my world," to which Sally replied: "You rock mine more."