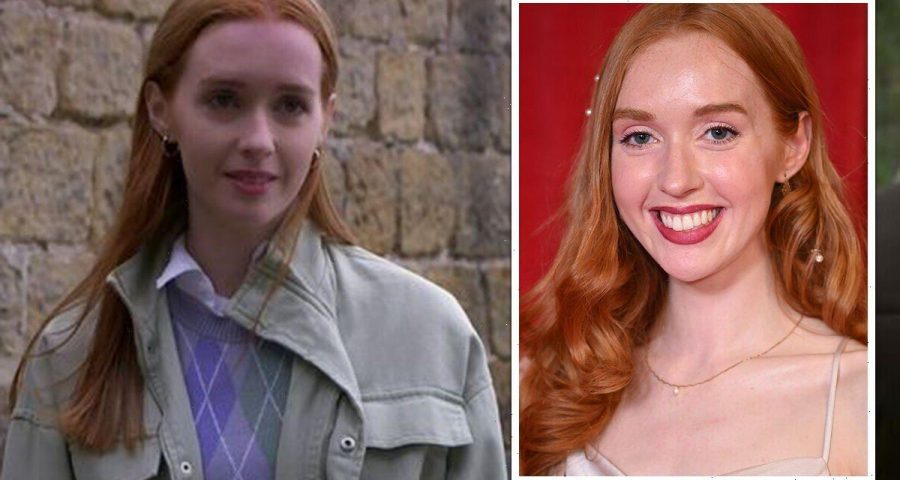 Emmerdale: Cathy and Arthur chat in the cafe

Chloe Harris takes centre stage in Emmerdale this week after she accused Priya Sharma (played by Fiona Wade) of having an affair with Al Chapman (Michael Wildman). Over at the Woolpack, a manic Chloe will appear revealing she knows who Al was seeing. Express.co.uk has all you need to know about Chloe actress Jessie Elland.

Chloe will start to feel lonely and isolated this week as she uncovers a huge secret.

At her sonogram, as the sound of a heart beating fills the room, she is overcome with emotion.

Later, Charity Dingle (Emma Atkins) catches up with Chloe after noticing her order a soft drink and tells her she promises not to reveal her secret.

Mackenzie (Lawrence Robb) then despairs as Chloe confirms the baby is his and she’s keeping it.

Actress Jessie Elland was born in Yarm, North Yorkshire, and studied anthropology at the University of Manchester before she switched to drama.

The soap marks her first major role in a TV series, with her only other credit being the series COBRA.

The star is on Instagram and she has given some insight into her life away from the busy Emmerdale filming schedule.

She is a very creative person who loves reading, travelling and has done some modelling work.

The actress is also on Twitter and she described her Emmerdale experience as “so surreal”.

When she joined the soap she said: “So excited for you all to get to know [Chloe] better.”

The star has since teased a huge showdown between Chloe and Charity as Charity guesses Chloe’s pregnancy.

Speaking to Digital Spy she said: “It’s awful. Chloe is squirming in discomfort; you can’t help but feel for her because Charity is actually being really lovely to Chloe and wanting to help her.

“In light of what happened with Noah, Charity has gone out of the way to be nice to Chloe.

“She says ‘Who’s the daddy? Is he gonna support you?’ and Chloe, obviously has to lie.

“It’s awkward but also on another level, Charity is being so lovely to her and Chloe is missing out on that maternal figure, because Kerry has gone.

“She’s wanted someone to look after her. But there’s that awful tension that person’s boyfriend is the father of her baby.”

Chloe has been around long enough now to know how badly things could end for her if Charity does find out the truth.

The actress hopes to have more scenes with Emma Atkins in the future, saying “she really, really brings us [Charity] to life and it’s fantastic to get to watch that”.

Since joining the series, the star has become an Instagram sensation, with fans loving her off-screen looks.

“You are so beautiful,” one fan wrote, while another said she was “simply stunning”.

On Monday ITV will be broadcasting the USA vs Wales game for the World Cup, with coverage beginning from 6.05pm.

On Tuesday, there will be an hour-long episode of Emmerdale from 7pm.